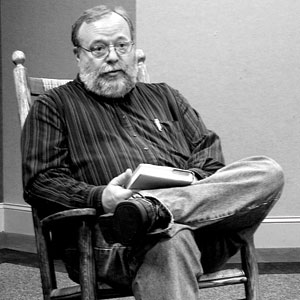 Raymond L. Atkins was forty-eight when he sat down to write his first novel, The Front Porch Prophet, and fifty-one when it was published. He concedes that’s “a bit to the right-hand side of the bell curve,” but he wouldn’t have it any other way. “I’m not sure how well I would have done if I had made the attempt earlier,” he says. “One of the main characters in each of my books is the unidentified, limited-omniscient narrator with the sardonic and humorous take on the world. It took me just about forty-eight years to acquire that outlook.” Atkins, who lives in Rome, Georgia, and teaches English composition at Georgia Northwestern Technical College, is now fifty-eight and writes generous, big-hearted fiction. His good guys are really, really good, and his bad guys are not all that bad, frankly, considering what they’ve been through.

Camp Redemption is set in the North Georgia town of Sequoyah, where Early and Ivey Willingham run a failing Bible camp. Early is a pot-smoking underachiever, and his much-older sister Ivey is a modern-day prophet who entertains regular visits from dead relatives and pesky angels. After the two are forced to shut down the camp, it becomes a haven for an assorted cast of misfits and runaways. The narrative threads converge on one blustery November morning, with a resolution that is poignant and deeply satisfying. It takes a writer of a certain age—and abundance of wisdom—to pull that off so neatly.

First Attempts The first story I remember writing was a science-fiction epic I penned in the fifth grade. It had ray guns, rockets, monsters, and a space-suited damsel in distress. I thought it was great, but since the assignment was to write about what I had done on my summer vacation, I received a poor grade from Mrs. Williams.

Character vs. Plot The plot is just a device to more fully develop the characters. At some point during the first draft, the characters begin to take on lives of their own. Once that happens, the writing becomes easier, and I find myself thinking, “He wouldn’t say that.” At this point, the characters are running the story; I just record the action.

Religion [The character] Early and I hold similar views on the subjects of religion, faith, belief, and spirituality, all of which ought to be synonymous terms but too often are not.