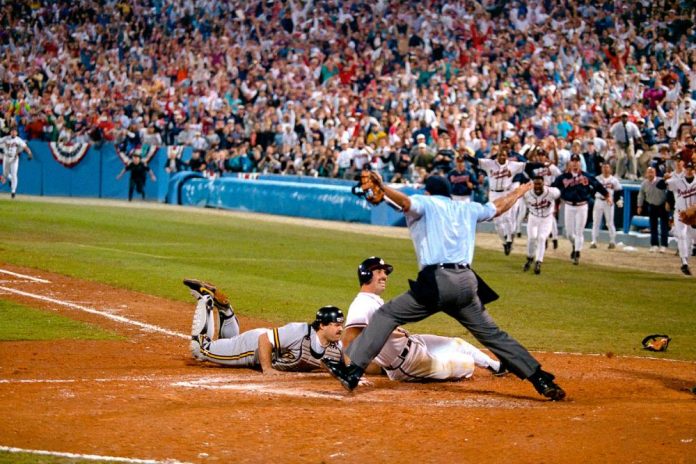 Of course, the main reason to lose your voice screaming at The Ted this weekend is tonight’s sure-to-be-tearful salute to John Smoltz as his No. 29 jersey is retired forever when the iconic pitcher is inducted into the Braves Hall of Fame during a pre-game ceremony at Turner Field. Smoltz’s jersey joins just nine other players in Braves Hall of Fame history, including Hank Aaron, Eddie Mathews, Dale Murphy, Phil Niekro, Warren Spahn, Greg Maddux, Tom Glavine and former skipper Bobby Cox.

But longtime Braves fans will no doubt want to be at the downtown stadium Saturday afternoon at 3:40 as well and not because the Toronto Blue Jays are in town.  As part of 2012’s alumni weekend celebration, the Braves organization is marking this year’s 20th anniversary of Sid Bream‘s legendary slide into home plate in the ninth inning of the 1992 National League Championship Game 7 that took the team to the World Series for the second time. On that particular evening, Braves fans’ left ventricular muscles were pulsating next to our molars as Beam hit a line drive and then took a Sunday stroll (Bream was arguably the slowest runner in MLB history…) as he hobbled around the bases with the ball jetting home just ahead of him. As an entire city ceased blinking, Braves announcer Skip Caray screeched, “Here comes Bream! Here’s the throw to the plate! And he is…safe! Braves win! Braves win! Braves win! Braves win!”

Before Friday and Sunday’s games, Bream along with dozens of other Braves alum, will greet fans and sign autographs at various locations around the stadium. Check Braves.com for details.