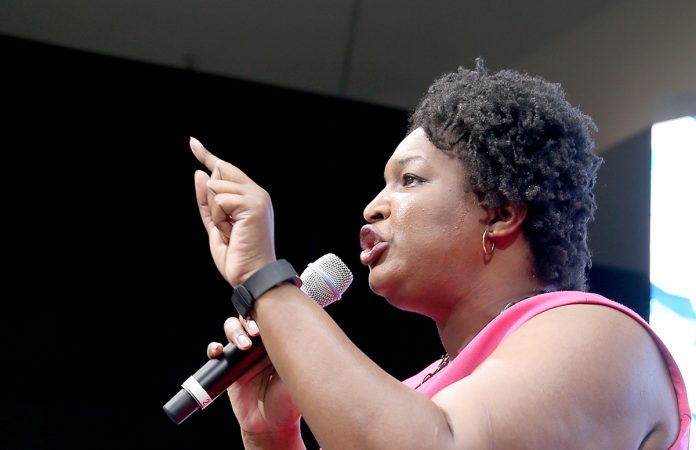 Halfway through the 40 days of the 2017 Georgia General Assembly, we caught up with state House Minority Leader Stacey Abrams for a few questions about how Democrats in Georgia plan to regain lost ground in the age of President Trump. We also talked about the New Georgia Project, a non-profit Abrams founded in late 2013; techniques for boosting voter turnout; and the crucial reapportionment of legislative districts scheduled to take place after the 2020 census.

What are the goals of the New Georgia Project?
There’s been a misapprehension about the New Georgia Project. It’s not an arm of the Democratic Party. It’s a progressive, but non-partisan, organization that focuses on voter registration. In 2014, there were 800,000 unregistered people of color in Georgia—at a time when we have the fastest-growing minority population in the South and one of the fastest-growing in the nation. Students of color make up more than 50 percent of our public school system, but if you’ve got nearly a million of their parents who are not registered to vote, it means they’re not engaged in some of the core decisions that affect their children’s lives. Our mission is to close that 800,000-person gap by 2024. Since 2014, we’ve registered more than 200,000 people of color—people who own their franchise and are paying attention to city council, county commission, and school board races.

How does the New Georgia Project make sure that everyone who registers is able to vote?
We began in 2014 in an adversarial posture to the Secretary of State’s office, which had voters who weren’t being processed. In fact, tens of thousands of people who we explained were missing from voter roles in 2014 were quietly restored to the roles in 2015 after the election and, in a negotiated settlement with the Secretary of State’s office, more were restored who had been unlawfully cancelled. So, we’ve help restored the right to vote for thousands of voters, but we’ve also helped the Secretary of State improve its processes.

What can the Democrats do to boost turnout?
The responsibility for turnout is one we haven’t engaged in fully. It’s why we continue to lose elections by 200,000 votes in a state of 10 million people. We cannot simply relegate that responsibility to a single organization or party apparatus. We only win as Democrats as part of a coalition. It’s the nature of who we are—we’re not a homogenous party; there’s an organic diversity of race and gender. And the Democratic Party is stronger when multiple organizations—like Georgia STAND-UP, Better Georgia, and labor unions—take ownership. I’m proud that the House Democratic Caucus has had a role through its work with Georgia Resists (an online portal with action alerts and volunteering opportunities), but I’m equally proud that we had nothing to do with the women’s march in Atlanta. That was organized by women I’d never met before, but who felt sufficient ownership over the future of their country that they were willing to do that work. And, as we walked with John Lewis, we saw a phalanx of different communities that had all heard themselves a call to action. We win by reminding people that there are already enough of us here to win an election—and by reminding people why it’s important that they vote.

What’s the status of the demographic trends that were supposed to turn Georgia into a blue state?
Had Hillary (Clinton) won the electoral college vote, the story of Georgia would be one of a bright, shining star because she out-performed the Obama vote in 2012 and flipped counties we haven’t won before. We picked up seats in the House caucus and reclaimed a seat in the Senate. And, for the first time, Douglas County has Democrats in every elected county position. But the demographic trend we’ve been watching will only come to fruition when we couple it with political engagement. Demography offers a path, but we can’t hold our breath and wait for it to do our work. That means not only talking to people of color who are likely to share our beliefs, but with those who don’t see themselves in the Democratic Party but who should be a part of it. Because, if we forget until 2020 that these communities exist, we’ll lose in 2018. And it doesn’t matter if we’re a demographically diverse state in 2021 if the people drawing the district maps don’t respect that.

How do the Democrats reverse the gerrymandering that’s taken place under the Republicans?
We’re certainly the minority party and in a very weak place numerically. Gerrymandering has not only removed some Democratic representatives, but it’s created some hyper-partisan Republican districts. The district maps show there should be 56 Democratic seats, and we’ve managed to win 62 of those. That kind of slow progress is not sustainable in terms of getting us back to a progressive majority. We need to win seats each cycle, but it’s imperative that the Democrats win the governor’s mansion in 2018 because that’s the only lever we would have that could sizably affect the redistricting maps.

Do you see yourself as a candidate for governor in 2018?
I see myself as the House mMinority Leader, and that’s what I’m focused on now.