Atlantans is a first-person account of the familiar strangers who make the city tick. This month’s is Sterling Davis, the founder of TrapKing Humane Cat Solutions, as told to Heather Buckner.

Nine or 10 years ago, I was about to go on tour with [the rapper] Tech N9ne when I saw an ad on Craigslist for scooping litter at the shelter. I was like, Ooh, this will be easy: I just play with cats, scoop some litter, get paid. Then, I go on tour. That was the plan, but I dove in heart-first. I was renting a seven-bedroom house in Stone Mountain and had a cat in every room. I was reading anything I could get my hands on about bottle babies, fostering. I worked with the LifeLine Animal Project for about five years before I started my own nonprofit in 2017, [TrapKing Humane Cat Solutions].

TNR—trap, neuter, return—is the alternative for death and euthanasia for stray and feral cats. I catch cats in traps, have them spayed, neutered, vaccinated, and then return them to their colonies. When you see a cat with their left ear tipped, that cat has been through TNR. A cat can reproduce as young as four months. At unkept colonies, they’re going to overpopulate and fight over food and mates. They’ll get these open gashes, bites—no way to go to the doctor. They fight, they get diseases.

The negative meaning of “trap king” is drug dealer. One of the first times I trapped, we were at the police station. A lot of my friends have rapped about selling drugs, “trapping.” I texted my friends saying, I’m trapping at the police station. That helped me think of the trap king thing. I was like, How did no one think of this before? I’m the king of trap-neuter-return? Trap King? Oh my god, this is too much! I’m trying to turn a negative into a positive, and I’m grabbing other demographics’ attention with this. Black and brown communities are underrepresented in cat rescue. Most of my cat ladies are middle-aged white women; we get our nails done together.

I was born in Detroit; my family was gutter-poor. My mom got with a guy that beat her, beat me. When I was a kid, I didn’t want to go home; I’d be out as late as possible, playing with the stray cats. I’m all about headbutts and slow blinks. I was in 10th grade when I came to Atlanta. I went into the Navy after I graduated from North Clayton High School. After the military, I started working [in] Corporate America. I wore a shirt and tie to cover up my tattoos, stopped painting my nails, hid my tongue ring. Eventually, I got fired. I started managing a friend’s [music] tour.

I don’t have any children, and I wanted to leave a legacy. For a while, I couldn’t afford rent and [TNR], so I lived out of a 1997 conversion van. One of my sponsors helped me get an RV. Now, I can park somewhere, set a bunch of traps, go inside, work while I’m waiting. (I help run a dating app for cat people, called Tabby.) I’m like a turtle: My house is on my back. I’m doing what I want to do 24/7. I want to have a positive impact on every living creature whose path I cross. I still do music. Me and Cat Man in West Oakland, California, made a music video called “All Day I Dream About Spayin’.”

I try to talk to homeowners’ associations and apartment complex managers before I go because I want people to know what I’m doing. I’ve had a gun pulled on me before. Once, I was in a predominantly white neighborhood. I’m a bald, tattooed Black dude. It’s two in the morning. I’m near your yard saying, I’m just here for the cats! People are like, Sure you are! Honey, get my gun. Look at the logo on my shirt. My RV looks ridiculous; it’s purple and blue with cats all over it.

I know, among my friends, I’m the weird guy, but I didn’t know how taboo it was for a Black man to deal with cats. And TNR—one guy was like, I don’t want my cat to lose his balls, his masculinity. I’m like, Stop projecting yourself onto the cat. That hypermasculinity is one of the reasons why it’s difficult to get my message across. That’s why I always say: You don’t lose cool points for compassion. 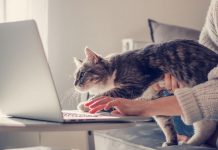 Why do cats adore Zoom?