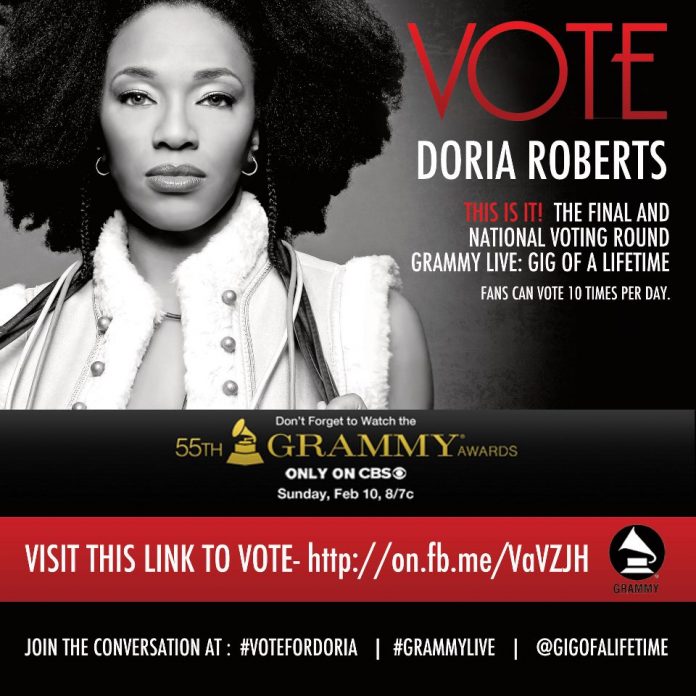 With countless mouse clicks from fans across the country, Atlanta singer-singwriter Doria Roberts has advanced to the finals of The Grammys Gig of a Lifetime competition. After emerging as the winner last week of the South Atlantic competition for the prestigious appearance, the East Atlanta biscuit baker is now up against six other bands and remains the only woman in the competition. With just 24 hours left to rack up votes from fans, Roberts will require all the girl power she can conjure up from her loyal fan base today.

The winner of the competition will be flown to Los Angeles next month to play a special Grammy weekend gig in front of some of the music industry’s biggest bold-faced names. Supporters can expect a frenzied Get Out the Vote! scene today at Urban Cannibals Bodega + Bites, the grocery and eatery Roberts runs with wife and chef Calavino Donati.

Of last week’s less than formal notification that she had clinched the South Atlantic semi-finals, Roberts tells Atlanta magazine: “I didn’t even realize I’d won. I kept sitting there refreshing the page after the timer ran out and didn’t fully understand that I was looking at the finalists’ page until I started reading the words above my video. Then I screamed. My fans really came through for me and stuck with me everyday. Their encouragement definitely helped me through a couple of nights where I didn’t think I could even look at a computer screen, let alone check my standing.”

I asked Roberts why this particular gig is important to her. She explained a milestone birthday in 2012 put her in a reflective mood. “I turned 40 last year and like a lot of people, I started looking through my stuff and having a good laugh at my expense,” says Roberts. “I found a recording of my first paid show labeled, March 5, 1993, Last Drop Coffeehouse in Philadelphia. This year is my official 20-year anniversary of being a real musician, which means I have been doing this — the thing I love most — exactly half my life. For something like a Grammy contest win to come along at this point is beyond description.”

If Roberts’ fan base scores her a win, it would mean a long overdue reunion on the left coast with her fellow former Eddie’s Attic regulars John Mayer and Sugarland‘s Jennifer Nettles and Kristian Bush, artists who were coming up on the Atlanta acoustic scene along with her in the 1990s.

After a successful slot on a 1999 Lilith Fair national tour, Roberts briefly flirted with signing to a record label but balked when music execs suggested she keep mum on being a lesbian. Instead, Roberts bought a copy of “Everything You Need to Know About the Music Business” by Donald Passman and started her own indie artist record label.

Recalls Roberts: “I was free to do whatever I wanted and I had the opportunity to be myself while doing what I love. That outweighed anything anyone ever offered me up until that point.”

One thing’s for certain — if Roberts scores the Grammys gig this week, it can only mean positive things for the current state of the music industry. For instance, she might single-handedly inspire Beyonce to go natural, sing live and occasionally consume a delicious, buttery biscuit.

Voting in the Grammys Gig of a Lifetime contest ends Thursday at 3 p.m. Click here to vote for Roberts.