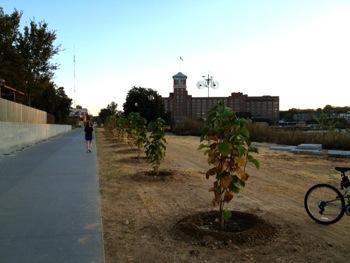 The Atlanta BeltLine punctuated another year of progress by acquiring the missing link between its popular Eastside Trail and its most visible landmark, Historic Fourth Ward Park. On the last day of 2012, Atlanta BeltLine, Inc. purchased a 0.76-acre parcel adjacent to the Masquerade from the Trust for Public Land for a cool $1.3 million. (The Trust buys up strategic pieces of land along the BeltLine and holds them until ABI can come up with the funds. Unfortunately, they bought this one in 2005 at the top of the market.)

Purchase land to connect to O4W Park  Build connecting path to O4W Park: BeltLine buffs call it the Gateway connection, and design and construction will take us into 2014.

Launch dedicated security patrol: The Atlanta Police Department announced last June it will create a fifteen-member BeltLine “Path Force” with funds from a federal grant. APD spokesman Carlos Campos says chief George Turner wants the positions filled before the end of the fiscal year, which is June 30. The team will patrol via bike, foot, and an electric vehicle that Campos calls a “golf cart on steroids,” and may extend its territory to non-BeltLine parks such as Piedmont Park. In the meantime, a string of robberies has led police to beef up their presence on the Eastside Trail.

Improve pedestrian crossing at Tenth and Monroe: Weather permitting, installation of a 28-foot-wide crossing and re-timed traffic signal is expected to wrap next week, so we’ll preemptively scratch this off the list.

Get trash cans: Good news for anyone scooping poop: trash (and recycling) receptacles are coming this week, says Davidson.

Build ramp to Ponce: The Atlanta Regional Commission’s Livable Centers Initiative awarded the BeltLine a grant to construct an ADA-accessible ramp at Ponce de Leon Avenue. There is no timetable for the project yet.

Extend the trail: The next BeltLine segments to be paved are a one-mile spur trail in the Beecher Hills neighborhood of Southwest Atlanta, which breaks ground this weekend, and the Eastside Trail’s extension into Reynoldstown. The latter requires reconstruction of a bridge at Edgewood Avenue, scheduled for completion in April 2014. Alas, there’s no timeline yet for the gravelly interim trail along Piedmont Park, where many an ankle bone was tested in December’s Eastside Trail 10K.

Anything else I’m forgetting? Oh, transit. With no funding mechanism in sight, the grassy lane along the Eastside Trail where streetcars will someday run seems a cruel taunt. But as the AJC reported last week, Mayor Reed is engaged in “at least three” conversations with potential private-sector partners to raise up to $800 million for BeltLine transit. The talks may take awhile; he expects to make an announcement next year. Meanwhile, the BeltLine graduated to Tier 2 of a federal environmental study, necessary for grant eligibility. Stay faithful, friends.