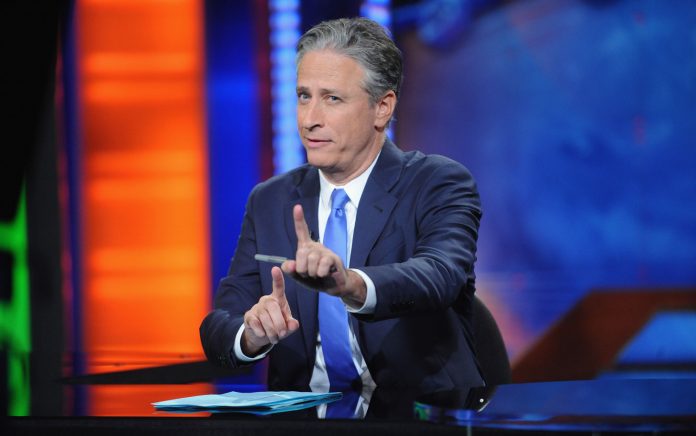 Just like Georgia governor Nathan Deal’s response to Tuesday’s wintry mix, Atlantans were completely blindsided Thursday night when Comedy Central’s The Daily Show with John Stewart devoted six minutes of airtime to mocking us mercilessly. Describing our traffic snarling weather event as an “ice age doomsday zombie apocalypse,” Stewart pondered: “I can’t even imagine how much snow it would take to bring on the zombie apocalypse. Three feet? Ten feet?” Cut to a clip of a Fox News anchor: “Two inches of snow hit the area.” “Really?” asked Stewart. “Two inches of snow? Is that what happens when the south is confronted by something not specifically mentioned in Revelations?”

Stewart then proceeded to riff on our allergy to HOV lanes. “It’s OK for two people to share a car, right?” As a still of Jessica Tandy and Morgan Freeman from Driving Miss Daisy flashed on the screen behind him, Stewart added: “I know this was the last time anyone in Atlanta car pooled, but still. This is an emergency!”

Cut to a clip of Deal at a press conference: “We have been confronted with an unexpected storm, There is no one in this room who could have predicted the degree or the magnitude of the problem that developed.” The sound bite was then trailed by a series of Weather Channel, CNN and WSB-TV Action News meteorologist Karen Minton clips, all correctly forecasting the snow on Jan 27. Pointing out that Atlanta also serves as The Weather Channel’s headquarters, Stewart added: “Not only were they warned, the call was coming from inside the house! The Weather Channel is located in Atlanta. Also located in Atlanta? The Society for the Prevention of Highway Stuckage and the National Department of Seeing S#*t Coming.”

Not even WSB-TV Action News anchors Justin Farmer and Jovita Moore or the 25 Action News reporters all providing simultaneous live coverage escaped ridicule. Said Stewart: “Look, a 25 news box pile up!” On his Facebook page, Farmer was taking it in stride early Friday, even posting a photo of the bit with the caption: “The Daily Show honored our 25 reporter box tonight.”

Daily Show fans on the program’s Facebook page, meanwhile, posted more than 100 snark-filled comments under the headline: “Tonight: Snow turns Atlanta into scene from Walking Dead (JK – no such thing as walking in Atlanta).” The lone voice of dissent in the feed? Cumming resident Tracy Lee White who wrote: “Jon, shame on you! Don’t perpetuate the myth that it was the snow.” Sharing a link to Atlanta magazine deputy editor and Atlanta historian Rebecca Burns’ Politico piece, “The Day We Lost Atlanta,” she added: “Read this article. It is the truest account of what happened and why.” Advised viewer Kim Martino to White and perhaps all Georgians: “Tracy, The show makes fun of the news and events. That’s its purpose. Don’t take it too seriously now. LOL.”