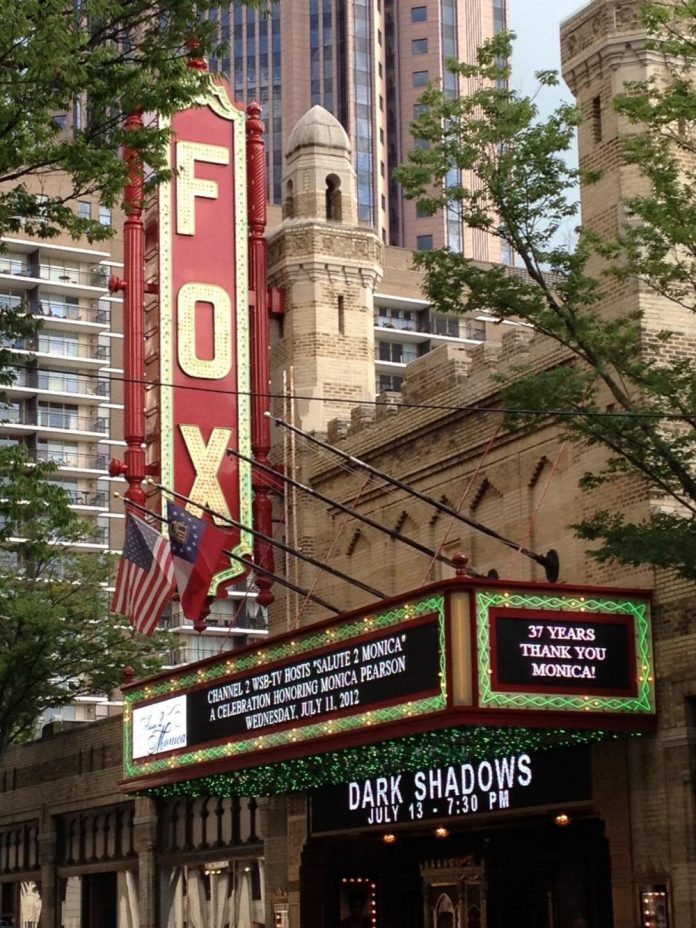 As Atlantans set their New Years black-eyed peas out for soaking today, let’s reflect on all things 2012 with the annual Eldredge ATL year in review. It was a year punctuated by an iconic exit at Eddie’s Attic, another at the WSB-TV anchor desk, one truly unforgettable Facebook status update, not to mention chats with Katie Couric and the one-and-only J.R. Ewing. Oh, and let’s not forget the goats in dresses. As always, a huge thanks to you for reading. Happy 2013!

Best Album Release Party (15 Years in the Making): A decade and a half after Atlanta rockers Uncle Green recorded their ambitious two-disc “Rycopa” project and watched their record label Sony shelf the album, fans rescued the mothballed music from a dusty warehouse shelf. In February, the band that later recorded as 3 Lb. Thrill reunited at Smith’s Olde Bar for a “Rycopa” album release party with fans who flew in from all over the country to witness the historic event. Reflected singer Jeff Jensen: “It’d weird to see pictures of my children and realize this album is older than they are.”

Best Reality Check on What Constitutes a Celebrity in 2012: In March, reality TV stars Kim Kardashian and NeNe Leakes broke bread (and shrimp rice krispies) at STK in Midtown, live tweeting their meal to millions of Twitter followers. Alas, in Atlanta, the sighting inspired just one determined paparazzo to brave the downpour outside to snap the pair as they exited the eatery.

Best 25th Annual Best Of Party: Atlanta magazine’s very own Best Of Atlanta party turned 25 in March and Miller Union pastry chef Pamela Moxley was among those in the spirit at the Camp Twin Lakes benefit. As she handed out 900 portions of the West Midtown restaurant’s famous chocolate fondant cake at the Cobb Galleria Centre, she said: “This is great for me. I don’t get out of the kitchen very often. I’m definitely interested in doing a little drinking!”

Best April Fool’s Gag: In all the years I’ve been covering this city, I’ve never gotten taken to the cleaners over an April Fool’s prank. This includes the 1996 prank when Star 94’s Steve McCoy and Vikki Locke had news director Rob Stadler read a fictional news report about a Summer Olympics boycott that ultimately got them suspended. But in the age of the iTunes store, it was not hard to swallow that a bricks and mortar store like Decatur CD would cave to consumer preferences and convert over as an MP3 digital dispensary. The vinyl and CD outlet’s Facebook and Twitter followers were also taken in by the joke and expressed outrage. Explained prank mastermind Young Elliot: “That was kind of the idea, to do something people would believe.” Mission accomplished.

Best Example of Job Security in 2012: In May, Eddie’s Attic namesake and acoustic music mensch Eddie Owen, the man who introduced the world to the Indigo Girls, Shawn Mullins, John Mayer and the Civil Wars was fired from the Decatur nightspot he founded. Current Attic co-owner Alex Cooley explained that Owen needed to focus on his new passion, booking talent for the Red Clay Theatre in Duluth. As for potential backlash from musicians (not to mention patrons who regard Owen as a musical god), Cooley quipped: “I’ve contacted all the acts. Nobody’s cancelled. No problem.”

Best Excuse to Sit Next to Katie Couric on a Couch: In July, The former “Today” show host and “CBS Evening News” anchor arrived in Atlanta, eager to discuss her new daytime talk show “Katie.” Patting the seat cushion next to her, she offered Atlanta magazine an exclusive 15 minute chat all to ourselves. After years of working for other people, Couric owns a piece of her new show. “It’s my little start up,” she cracked. “Creatively, it’s thrilling to not have someone say, ‘No, we’re not doing that, that’s not how we do things around here.’ We get to write our own script and the narrative is ours to create.”

Best Retirement Soiree: Economic downturn be damned, the honchos at WSB-TV cracked open their checkbook wide in July when it threw the station’s signature anchor Monica Pearson a black tie retirement dinner in the Fox Theatre’s Egyptian Ballroom. Pearson’s name was literally in lights on the marquee outside. “Can you believe this?!” Pearson confided quietly, cooling herself under an air conditioning vent during a private moment. “I didn’t think I wanted a big party. I never knew there was this side of me. I’m at a big house party with my friends except it’s at the Fox.” More surprises awaited her inside: Former mayor Andrew Young paid tribute to her in song, “Good Morning America” co-anchor Robin Roberts, recently diagnosed with MDS, flew in to emcee and Oprah Winfrey, the woman Pearson beat out for the WSB job in 1975, even sent a congratulatory video greeting: “OK, you beat me. I bow to you. Congratulations!”

Facebook Status Update of the Year: In response to Missouri Congressman Todd Akin‘s now-infamous “legitimate rape,” “women have a way of shutting that whole thing down” statement in July, Atlanta writer Thomas Lofton McLean shocked his Facebook friends by posting a photo of himself holding this handwritten note on the popular social media site: “My mom was raped. I was born as a result. If you don’t believe pregnancy results from rape, all you have to do is look at me and see that you’re wrong.” The post instantly when viral. Of going public with the post, McLean explained: “This is not something that normally comes up in cocktail party conversation. But like most things, once the public gets personal, people get more motivated to speak out.” Snatching defeat from the jaws of victory, Akin, once the frontrunner in his re-election campaign, was soundly thumped by voters in November’s congressional race in Missouri.

Best Reason to Dress Goats Up in Couture: To celebrate the 20th annual Jeffrey Fashion Cares in August, Buckhead philanthropist Cathy Smith underwrote the fashionable fundraiser’s County Fair-themed after party at Opera nightclub in Midtown. In addition to a late-night feast of barbecue plates and corn dogs and a carnival games midway, Smith rented a petting zoo for the affair and had original frocks designed for the goats in attendance. The evening’s honoree, New York fashion designer Joseph Altuzarra was clearly smitten and happily posed for the photos with the glitzy goats.

Best Charitable Fundraising Mouth: CNN founder and Mouth of the South Ted Turner was the catnip used to sell out both ex-wife Jane Fonda‘s G-CAPP EmPower Party benefit in October and daughter Laura Turner Seydel‘s Captain Planet Foundation gala this month. Both fundraisers gave Turner an opportunity to speak his inimitable mind on stage at the Georgia Aquarium’s Oceans Ballroom. In October, reflecting to moderator Pat Mitchell on his legendary quip that “the world needs to get rid of testosterone poisoning,” Turner cracked, “I used to drink. I said things then that I’ve since apologized for!” In turn, Fonda explained the inspiration for her cable news boss Leona Lansing on the hit HBO drama “The Newsroom” thusly: “I’m playing Ted Turner with a little Rupert Murdoch thrown in!” This month, on a stage with billionaire Richard Branson and former president Jimmy Carter, Turner slouched and grinned as Carter expressed his support for the legalization of marijuana. But, as usual, Turner was spot on with his concern on environmental issues, even as some GOP lawmakers continue to reject the notion of global warming. “We need to keep spreading the word,” he explained to applause. “We’re getting a lot of help from Mother Nature with these terrible storms too.”

Interview of the Year: In June at age 80, “Dallas” icon Larry Hagman gleefully made the media rounds as TNT’s reboot of the prime time soap debuted on the Atlanta-based drama cable channel. With a bank vault full of salary money still in reserve from the show’s first run, Hagman had famously set the stage for those future record $1 million per episode “Friends” salaries back in 1980 when he won a hard-fought salary bump from CBS. In an attempt to back him into a contractual corner, producers shot Hagman’s character in a season-ending cliffhanger. The plan backfired when ratings soared and Hagman countered with an even bigger payday demand. I asked him with all that money, what creatively remained unexplored with a character he had played in more than 350 episodes. Nothing, Hagman said simply. Turns out, he just wanted one more opportunity to work (and play) with two of his best friends and original “Dallas” co-stars, Patrick Duffy and Linda Gray. Said Hagman of slipping back into villain J.R. Ewing’s Stetson, “I thought we had gone through everything we could. Now with the new show, I’m finding out there are lots of things I never even thought of!” In November, Hagman lost his battle with cancer while filming the hit show’s second season on location in Dallas. Cherished co-workers Duffy and Gray both showed up to eulogize the actor at his memorial service.

Story of the Year: This spring, between dozens of dinners, luncheons, awards ceremonies, dedications and other media interviews, retiring WSB-TV Channel 2 Action News anchor Monica Pearson spent hours with Atlanta magazine, thoughtfully chronicling her storied career for readers. Even after the first draft of the magazine’s July story was submitted, Pearson continued to provide additional details and personal insights from her trailblazing career in Atlanta. In 1975, station management took a risk by hiring the first female and the first person of color on Atlanta’s six o’clock news. Off-air, the anchor was subjected to hate-filled phone calls from racist viewers, welcoming her to Atlanta with “Nigger, get off the air.” But Pearson and WSB stayed the course and ended up creating a TV icon that has inspired generations of budding journalists of all colors, sexes and ethnicities. Explained Southern Christian Leadership Conference cofounder Dr. Joseph Lowery in our July story: “Monica was coming into the living rooms of white folks every night at a time when most white folks only encountered us as waiters and maids. And she was coming into their living rooms as an equal. More than an equal. She was a star. It was a tremendous turning point.”