Jane Goodall, 80, the lauded primate behaviorist, comes to Atlanta to receive the Exemplar Award at this year’s Captain Planet Foundation Gala. While in town, she also joins Captain Planet chair Laura Turner Seydel (and her ex-stepmom Jane Fonda) to host a private event for schoolchildren at Zoo Atlanta.

You’ve been named to the French Legion of Honor and are a Dame of the British Empire. What’s it like getting an award from Captain Planet? Ted Turner has made a major impact on the world. I respect him hugely for what he’s done. He is capable of doing a lot of work to change attitudes. I’ve known Ted over quite a few years now, and I’m delighted to get to see him again.

You’re crowdfunding online and have more than 208,000 Twitter followers. You clearly understand the power of social media, but what lessons from your visits with chimpanzees in Tanzania back in 1960 should we remember in our ultra-wired world? Electronic media can open new doors, but, as human beings, we also need to be connected to the earth, and we desperately need that personal contact with each other. I travel 300 days out of the year, and I wouldn’t be able to do that in a purely electronic world. Everywhere I go, there are amazing, wonderful people. I can hug them. I can look into their eyes. We need that relationship with each other and with nature to be whole human beings.

Your latest book, Seeds of Hope, takes readers from your grandmother’s beech tree through multiple continents. What’s the message for those of us unlikely to travel so far? I want city dwellers to stop and look at the trees in the park, to stop and marvel at that little plant pushing up through the crack in a paving stone. Change is as close as your own backyard, even if you only have a window box. Everybody can bring nature of some sort into their lives.

On the calendar: The Captain Planet Foundation Gala, a charity event for the Ted Turner-founded eco-activism organization, will be held December 5. 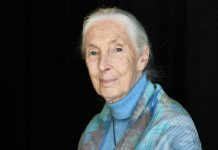 Jane Goodall on climate strikes: “I just want them to march and to raise awareness and to act.”