In some circles, Southern is still an unsettling quirk, an excuse for caricature—like the mute and heroic Boo Radley or wanton Daisy Mae Scragg, heartthrob of Dogpatch. This realization first crossed my path the summer before eighth grade, when a bunkmate at camp in the Adirondacks demonstrated for me the miracle begot by the light switch on our wall. A counselor explained the wonders of our cabin’s flush toilet.

My sorry state of being Southern had preceded me.

“We have these in Atlanta,” I said, with a gargle of humiliation and rage that was received as banjo-picking idiocy. After I was gently asked how many slaves my family owned, I hid in my bunk for the next two months, scrawling furrows of blue ballpoint epithets in my journal. This was 1972. Surely my bunkmates knew better. And yet, as far as my Camp Echo Lake peers were concerned, I was Scarlett O’Hara.

Almost 40 years later, I was one of nine Southern female authors assembled by Vanity Fair magazine for a photo shoot to accompany an article about us. And there, on the Swan House lawn, was that quirk again, this time in the form of hats. Beribboned emblems of a fantasy South—yellow straw with a black band, wheat-colored straw with a brown bow—were piled in the arms of a wardrobe assistant, sweet and round and wide-brimmed to shade us from some blazing Southern sun.

We’d been ministered to by a celebrity hair stylist known for grooming seasons of women on What Not to Wear. A decision was made that the hats would damage our freshly curled, sugar-spun hair, and the hats (most of them, anyway) and assistant departed.

The Swan House, with its graceful scrollwork and breeze-welcoming windows, is the very picture of a genteel South. It is a showpiece of the Atlanta History Center, in whose excellent Kenan Research Center I worked on my first book. I spun through the library’s microfilm records to confirm my memories about Martin Luther King Jr.’s funeral, which I had attended as an eight-year-old; about the closing of Renewal House, the drug treatment center on Eighth Street that my father directed; about Atlanta’s famed “Strip” and the runaways and hippies who haunted my teenaged years.

A few weeks before the shoot, my book’s publicist had called to inquire about my clothing sizes: shoes, waist, inseam, dress, shirt size. I knew that we’d be presented in the article as Southerners. I grew up in Atlanta. I am Southern. I write about this all the time. I was anxious for any opportunity to promote my book, and I admit I’m an easy sell on anything presented as chic. A fancy journalist and a photographer wanted to include me—a debut memoirist—on a page alongside writers better known and more lauded than me.

Sure enough, my publicist’s questions bore fruit. On the day of the shoot, a wardrobe rack was hung with couture chosen by a stylist just for me. Eight more racks lined the room, a hand-picked wardrobe for each of us. Shoes overflowed from a steamer trunk. In coat rooms and alcoves, the nine of us zipped and tugged and inspected. In Oscar de la Renta and Swarovski, we became cake-frosted versions of ourselves.

The photographer wore a black patch over the eye not affixed to her viewfinder. She lifted the patch away when she stood, ignoring the diagram with our names that was on the grass beside her. From behind her camera, she gave us directions, saying, “You in the blue, turn to the one in the brown.” A wardrobe assistant obscured my tattoo with a shawl. Production assistants counted the rhythm aloud as we skipped, holding hands, toward the camera. We spent the entire day sitting this way and that; holding hands and skipping; pretending to serve and drink tea from delicate cups; holding our breaths, our postures, our tongues. Dazzled by opulence, I giggled. As I remember, there was a lot of laughing.

“You in the beige, sit up straight,” the photographer told me.

The weather had been wet, and my stiletto-heeled sandals sank into the mud. Keeping my balance, regretting the destruction of an expensive pair of shoes, I wondered why the assistants had artfully strewn autumn leaves in our path but neglected to first lay down a hard mat.

We had arrived as ourselves, but before the camera we reinforced the image that so many of our books intended to break. I had known going in that my own identity would be obscured by makeup and clothing more elaborate and costly than I would ever wear in real life. I knew when I accepted the invitation that my individuality wouldn’t be affirmed; after all, I worked behind the scenes in television for more than two decades. But it was only as I was sinking into the mud in five-inch heels that I realized I’d agreed to betray the contemporary South I’d worked so hard to portray.

Our photograph is one more contribution to that fantasy that obscures the real South. Yes, I saw a Confederate flag–draped pickup truck in rural North Carolina this summer. But I’ve seen them in Maine, too. In the 1980s, when I lived in a duplex in Arlington, Massachusetts, my home was the target of a sad little Molotov cocktail—a Pepsi bottle with a gas-soaked flaming rag in the neck. Why? Jewish names on the mailbox, the cop said. My housemates and I were lucky. Only the curtains on the front door were damaged.

Southerners aren’t always the backward ones.

A writer knows that no story has a plot without change. My South is full of change. The books we nine Southern authors wrote told stories of family wreckage, of leaving home and finding it, of childhood and growing old, of sexuality and racism. I know that in my writing I try to give voice to those who have lost theirs. But the Southern women our photo implied were caricatures of a long-ago era. With my rigid smile and flowing skirt, I let my voice be silenced as well.

A few semesters ago, one of my students projected the photo onto the wall as I came into the classroom. I could have made a teaching moment of the clash of images: the Professor Handler they knew in the classroom versus the Professor Handler looming on the wall. I could have told my students that within the photograph are too many white people. I could have pointed to women with advanced professional degrees, sometimes more than one to a person. I know there’s grief and sorrow and joy and humor in those women. And I know that there’s frustration in at least one of them—me.

Telling a true story can be a difficult act. Watching my students, college freshmen, gape at nine Southern women dressed as delusion, I did what I couldn’t bring myself to do at summer camp or in front of Vanity Fair’s camera.

I said, “Oh, shit.” And then I reached for the light switch, obliterating the image.

Jessica Handler is the author of Invisible Sisters: A Memoir and Braving the Fire: A Guide to Writing About Grief and Loss. Her nonfiction has appeared on WABE and in Tin House, Drunken Boat, Brevity, Creative Nonfiction, Newsweek, the Washington Post, and More magazine.

This article originally appeared in our November 2015 issue under the headline “You in the beige!” 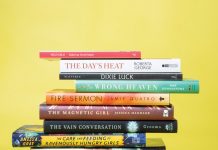