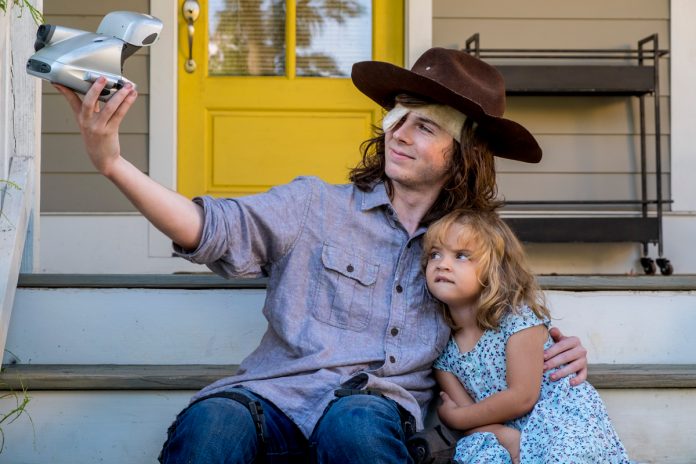 Each week, we comb through the guts of The Walking Dead, much like a horde of hungry walkers, to bring you the episode’s best moments, surprises, and other post-apocalyptic curiosities. This week: a kid kills, a kid dies, and a kid does not cry.

Best pitfall avoidance: In a perfect world, we wish Carl hadn’t been killed off so we could continue to follow his ongoing comic book arc. However, since the show did tease that walker bite in the previous episode, we’re glad it was indeed fatal. It would have been so easy to close the episode with a “shocking” twist: “Carl is immune to walker bites because reasons!” Not only would this have been tenuous to explain, it would have been insulting to fans who are well-versed in the “rules” of the show’s bites.

Best conflict resolution: Carl’s impending death seems to end (or at least pause) the season-long feud between Daryl and Rick, as Daryl gives his buddy a caring shoulder pat and volunteers to make sure Judith is taken safely to the Hilltop. We’re glad to see these two back on each other’s good sides.

Reason No. 7,481 to love Jerry: As if we needed any more, but watching six-year-old Judith’s pure joy when she runs up to give him a bear hug in Carl’s dream? We sincerely hope Jerry continues evolving from minor character to main cast.

Worst editing: Look, we get it, child actors can be difficult to work with; they’re usually not going to do what you want them to do. But when you’re constructing a high-drama deathbed scene, maybe don’t go for a canned “crying baby” sound effect poorly mixed over a toddler who is obviously not crying. Took us right out of suspended disbelief.

Best friends: We knew watching Rick say farewell to his son would be hard, but watching Michonne and Carl say goodbye, proclaiming that each was the other’s “best friend” and that they loved each other, was heartwrenching. The relationship between these two has always been a delight—we’re glad it wasn’t glossed over at all in his final moments.

Fever dream: Does anyone else think Old Man Rick has a Santa Clause beard thing going on?

Biggest question: There’s a good chance that many of the people watching this episode felt uncomfortable when Eugene and Negan appeared in Carl’s dream, both cheerfully talking to Judith as if neither of them had ever been part of the savage group that destroyed her home. Carl’s last speech is all about redemption—how Rick shouldn’t kill all of the Saviors because something must come “after”—but will we ever really be able to forgive Eugene and Negan for what they’ve done?

Carol’s kids: Are we really doing this plot? Carol and a crazy kid? Again?

Unintended casualty: You will never hear another “CORAL!” on TWD again.

Most disturbing image: TWD is known for its gratuitous violence, but Morgan ripping the intestines out of the attacking Savior was so on-the-nose that earned no emotion from us other than “Are you kidding me?” It wasn’t dramatic or shocking, nor was it even the tolerable “gore for gore’s sake” you often see in the zombie-killing scenes. We can understand that Morgan has gone off the deep end without him disemboweling someone.

Most impactful kill: Carl choosing to shoot himself to spare Rick, Michonne, or anyone else the pain of having to do it. It’s a perfect example of the humanity he’s preaching to Rick, and being that faithful to his own words makes them much more impactful.

Episode MVP: It’s an obvious choice, but Carl earned this spot more than he ever has. In eight seasons we’ve watched him grow and evolve from a character that many fans despised to a strong, level-headed adult who reminds Rick that there is always hope to be found in the apocalyptic world. He said goodbye to his family with no fear, wanting nothing more than to soothe them and leave them feeling as strong as he felt. The fact that actor Chandler Riggs completely stole the episode with a moving performance cements it—we’re really gonna miss Carl.

And we’d tell you where Rick Grimes fell on the calm/crazy scale this week, but his tears short-circuited the mechanism. It’ll be back next week.