Home News & Opinion Hollywood of the South The Walking Dead Awards: God save the king 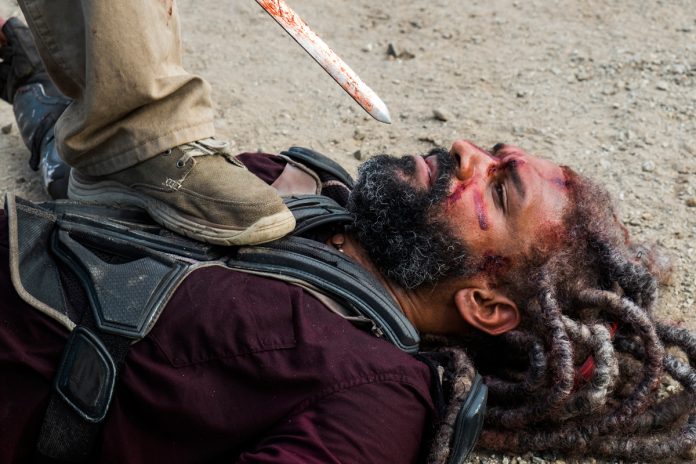 (Spoilers for the TV show and comics ahead)

Each week, we comb through the guts of The Walking Dead, much like a horde of hungry walkers, to bring you the episode’s best moments, surprises, and other post-apocalyptic curiosities. This week: A king versus his people, a tiger versus an ecological disaster, and a Jeep versus a Humvee.

Most intense: This week’s episode had us on the edge of our seats for the entire hour. Excellent pacing and constant peril kept us glued to the action—we were surprised time was up when it ended.

Biggest worry: For the first half of the episode, we were worried that fan-favorite Jerry, played by Atlanta actor Cooper Andrews, didn’t survive the Saviors’ machine gun blast. We kept looking through the walker horde, hoping not to catch a glimpse of his figure. Thankfully the old movie and television adage held true—no character is dead until you see the body.

Solved mystery: Well, now we know that happened to that super messed-up walker way back in the season opener. His skin was corroded from whatever toxic substance toppled into that creek. A good reminder that there’s more to worry about in the apocalypse than just zombies and humans.

New question: Just how did the chemical spill happen? Was this a superfund site before the outbreak or did someone think hauling corrosive materials after the fact was a good idea?

Smarter decision: Gotta go with Ezekiel on this one—given the choice of helping a hurt zoo tiger and potentially being mauled by it, or being mauled by walkers, we’d go with the tiger. It paid off—Shiva was a loyal companion until the end.

Ethical dilemma: Carol seemed to face her own trolley problem while at the Savior compound—stop the men trying to drive the truck of guns back to the Sanctuary, potentially saving hundreds, or help Ezekiel and Jerry take down the walkers, saving two. Luckily the familiar roar of Daryl’s motorcycle confirmed the latter was the better choice.

Thickest plot armor: Daryl didn’t even have so much as a scratch on him after that motorcycle crash.

Saddest moment: Is it bad we felt more distress when Shiva died than when Glenn did?

Best savings: Looks like the TWD crew can repurpose the CGI tiger fund back into the blood and guts budget now.

Biggest disagreement: Ezekiel is wrong—he’s not just “some guy.” While he may not be royal by blood, he is a strong leader, one that the Kingdom certainly needed. He’s evolved into a positive, inspiring force, and while losing most of his men is certain to diminish that spark, we hope it won’t extinguish it.

Most disturbing image: The match cut between Ezekiel’s speech and the aftermath of the M2 Browning machine gun fire. There’s been a lot of gore and guts on this show, but Greg Nicotero channeled his inner-Saving Private Ryan for this one. We need a couple of wholesome minutes to get over this scene—we’ve seen some things.

Best kill: Could we really pick anything other than Jerry slicing that obnoxious Savior in half with an axe?

Episode MVP: Daryl and Rick, who not only stopped the guns from getting back to the Sanctuary but did so while unflinchingly staring down machine gun fire at 60 miles per hour.