Home News & Opinion Hollywood of the South The Walking Dead Awards: What happened to Eugene? 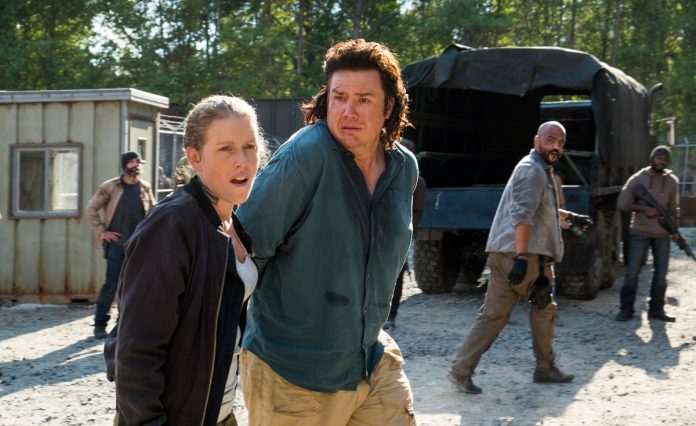 Each week, we comb through the guts of The Walking Dead, much like a horde of hungry walkers, to bring you the episode’s best moments, surprises, and other post-apocalyptic curiosities. This week: The gift of knowledge, the gift of gab, and the gift of pickles.

Don’t call it a comeback: Just when you got it out of your head, everyone’s favorite earworm returned. Just remember, you’re on easy street . . .

Best childhood callback: We forgot about the red kind of canned pasta sauce! (Though it was all about the orange kind.)

Best crossover: Eugene suggested to Negan that he coat his guard walkers in liquid metal to keep them from decaying, similar to the creature he and Abraham encountered last season. Does this mean Negan’s army is about to include a fleet of T-1000’s? Yikes.

Best new position: Eugene has a propensity for knowledge, but who would’ve thought that the Saviors would need Mr. Wizard? Let’s just hope he’s nicer to children.

Best science experiment: You too can create Eugene’s crazy foam snake demo at home! Just please do it outside—and with adult supervision. As for the hydrogen explosion, well, Atlanta’s burned down too many times already.

Biggest kick in the feels: Who could have guessed that we’d be feeling so much sympathy for Dwight, but the last line of Sherry’s letter cuts to the quick. “I loved who you were. I’m sorry I made you who you are.”

Saddest moment: Dwight did remember the pretzels and beer. We’re ready for this redemption arc.

Best new character: The Grimbly-Gunk. We bet you’ll be able to buy one of these in Senoia before the year’s out.

Worst scavenging: The Saviors can’t even get their hands on an NES, SNES, or Nintendo 64?

Cheesiest line: “I was Negan before I even met you,” Eugene waxes to Negan when presented with the question Daryl could never answer. Somebody’s been watching too many Meg Ryan movies.

Worst murder plot: We can totally understand the wives wanting to kill Negan, but considering they have access to him any time, in any sort of, erm, state, is a poison pill really the best solution they can come up with?

Most unnecessary gore: Yes, the walker that disintegrated from below the ribs proved Negan’s point that he needed a way to stop the zombies from decaying. But seriously, did we really need to watch all the innards fall out? It’s not the most gruesome thing Greg Nicotero has designed, but it was pretty gratuitous.

Biggest mystery: Eugene seemed to be slipping back into cowardice during tonight’s episode. But after all the growth he’s gone through during the last few seasons, we’re not so sure that’s actually the case. Hopefully in the next few weeks, we’ll see a strong Eugene pull a Galen Erso on Negan.

Best line: Really? You want us to pick out one line in an episode all about Eugene? That would be a tactical error on your part.

Most disturbing image: Negan’s smile as the prepares to place the iron on Dr. Carson’s face. It was so genuine that it was more disturbing than the aforementioned murder itself. Jeffrey Dean Morgan is a master.

Episode MVP: Negan’s wives. We confirmed that Sherry was the one who helped Daryl escape and that Tonya and Frankie were plotting to kill Negan. So far, out of all the people living in the compound, only these women are stepping up to stop a monster.

And sadly, there was nothing to test on the calm/crazy scale this week. We imagine Rick Grimes is still busy trying to translate Garbage Pail Kids English to Regular English.