Home News & Opinion Hollywood of the South The Walking Dead Awards: Hope at the Hilltop 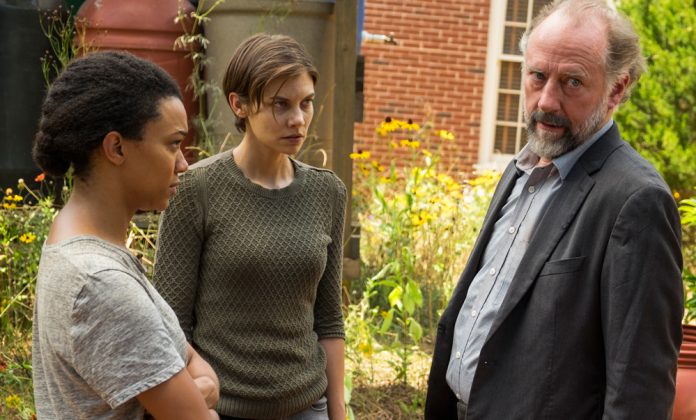 Now’s not the time to use that: Roller skates will make you travel faster, until you take a corner too quick and faceplant into a few hungry, hungry walkers.

I know Kung-Fu: Jesus’s martial arts mastery was one of the most entertaining aspects of this week’s episode.

Diet Negan: Simon packs all the punch of Negan, but with less colorful language. It’s slightly better for you, honestly.

Biggest asshole: Who steals a pocket watch from a grave? Gregory, apparently.

Self-closing plot hole: Carl is a terrible driver, but when you realize that he’s never taken a single driver’s ed course thanks to the apocalypse, haphazardly plowing into things makes a lot more sense.

Unexpected aww: Like most Walking Dead fans, we tend to hate on Carl a lot. But you have to admit, that kiss between him and Enid was pretty cute. . .

Best one-up: . . . But Rick and Michonne’s passionate kiss was the real winner in the awww department for this episode.

Best challenge: Maggie standing up to Gregory at the end of the episode was wonderfully satisfying. She’s really putting herself in a position to lead.

Best kill: Maggie rolling that tractor over the walkers and the music-blaring car was pretty epic, but she earned double points for admitting that she’d tractor-rolled over some guy’s Camero back in the pre-apocalypse days.

Biggest mystery: We’ve got to wonder what that kid did to warrant Maggie busting out the tractor.

Most disturbing image: We’ve already touched on Gregory’s less-than-stellar morals, but the most disturbing thing from this week was when he attempted to sell out Maggie and Sasha to the Saviors. Think about it—he was willing to put a pregnant woman in harm’s way. That’s not just cold; that’s absolute zero. What would Jesus (take your pick of which one) think?

Episode MVP: Sasha, for her selflessness. She was willing to do just about anything to keep Maggie at Hilltop, including casting herself out and scavenging on Maggie’s behalf, and we don’t think it was just because of grief over Abraham’s death. She’s grown a lot as a character over the past couple of years, and we’re glad to see her standing up for her friends.

And sadly, Rick wasn’t in enough of this week’s episode to measure on our calm/crazy scale. I guess that’s what happens when you have to spend all your time gathering supplies for Negan. Rick, you’re working too much. Your family misses you.