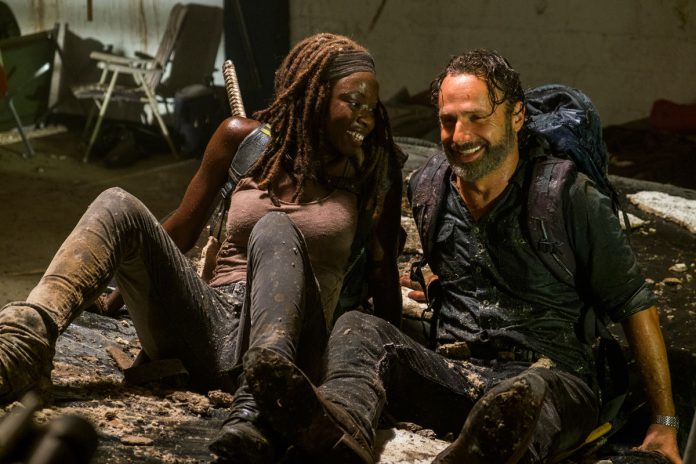 Each week, we comb through the guts of The Walking Dead, much like a horde of hungry walkers, to bring you the episode’s best moments, surprises, and other post-apocalyptic curiosities. This week: Rick falls off a roof, Rick falls off a Ferris wheel, and Rick falls into a box.

Best “screw you”: The two guys playing golf that Michonne and Rick stole batteries and pretzels from? Yeah, those were Saviors. If you listen closely, you can hear them talking about Fat Joey (RIP).

A prequel we’d like to see: Several times early in this week’s episode, Rick and Michonne teased that something big must have happened at the school carnival. The duo picked up abandoned guns off the ground, and most of the walker soldiers still had their hardware still strapped to their backs. What lead to this eerie scene? Whatever it was, it must have been quick.

Worst luck: Everyone in The Walking Dead has a bad track record with collapsing roofs.

Biggest omen: We’ve predicted this before, but Michonne spent approximately 20% of this episode giggling. She and Rick are far, far too happy for both of them to survive this season.

The real reason Rick wanted to extend the supply run: As evidenced by the first five minutes of the episode, there are certain, erm, activities, that are hard to do in a house shared with Judith and Carl in Alexandria.

Biggest growth spurt: Is it just us or Judith a lot older than the last time we saw her? At least she’s not talking yet.

Wasted potential: We were pretty sure that once the carnival ride fence gave way, Rick was going to turn on the nearby swing ride and gloriously take out all the walkers at once. Guess they blew the budget on that Mad-Max-esque high-tension wire slicing from the mid-season premiere.

That could have ended badly: Hey, Michonne? Maybe, just maybe, when you’re jumping into someone’s arms because you’re ecstatic they’re not dead, put the katana down first?

Biggest oversight: Rick told Michonne they were fighting for the future, specifically, the future of Judith and Baby Rhee. But screw Carl and Enid, amiright?

Most unnecessary bargaining chip: Why did Jadis try to take back Michonne’s cat when negotiating the amount of guns Rick got to keep? You live in a junkyard—surely there are plenty of metal animal sculptures to covet. That’s just petty.

Best exchange:
Rick: I think we overshot it.
Michonne: You think? Or you know?
Rick: I know. It was a good plan though.
Michonne: It was a great plan.

Best kill: As Michonne stands shell-shocked after thinking she witnessed Rick’s demise, Rick grabs her sword and tosses it to her. And in epic Matrix-like slow-mo, our favorite warrior deftly grabs it and slices up a pair of nearby walkers.

Most disturbing image: Rick ripping apart the military man stuck in the car. How many zombies do we see getting torn in half this season? Gross.

Episode MVP:  Rick and Michonne’s sex life. Even in the apocalypse, it’s important to take time for each other and keep the romance alive. Whether you’re falling through a roof onto a mattress, eating MREs by candlelight, or copulating like two high school kids from the ’70s in the back of a van, this is the stuff that makes relationships last. (Until the writers decide to kill one of you. Which they will.)