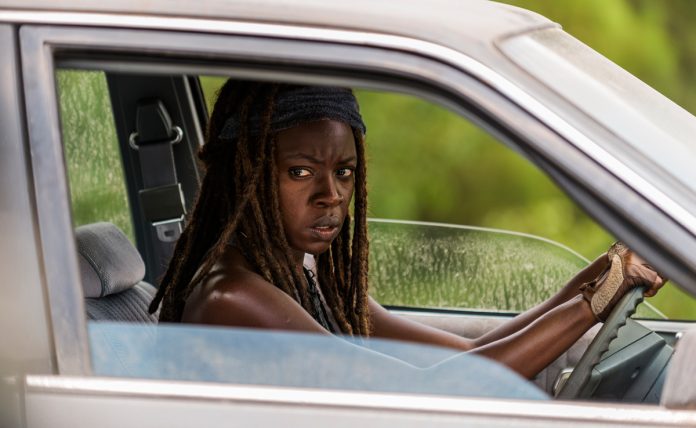 Each week, we comb through the guts of The Walking Dead, much like a horde of hungry walkers, to bring you the episode’s best moments, surprises, and other post-apocalyptic curiosities. This week: Rick talks to a politician, Rick talks to a king, and Rick smiles at a lot of ladies.

Best idea: Gregory snarks at Tara, “Let me stop you before you break into song.” But wouldn’t that be one heck of an episode? The zombie chorus groaning in the background as our heroes sing a triumphant anthem about how they’ll take down the Saviors once and for all? . . . Okay, maybe not.

Most improved: This time, after a litany of names that weren’t even close, Gregory called Maggie “Margaret.” Close enough?

Best new RickSpeak: By now we’re all familiar with “Coral” and “Stuff and thaangs.” Get ready for the newest Rickism: “Kang” for King Ezekiel.

Best parable conclusion: Rick’s titular Rock in the Road parable may have been deep, but we all know that here in Atlanta the tale really ends with a steel plate covering the new hole in the road.

Best motherly instinct: Why do young people keep flocking toward Carol? Someone needs to tell Benjamin what happened to Sam and Lizzie.

Biggest oversight: The men at the Kingdom took Rick and Carl’s guns, but didn’t say a word about the katana hanging over Michonne’s shoulder. Clearly they haven’t seen her work.

Best ulterior motive: Does anyone else think King Ezekiel let Daryl stay simply to entice Carol to come back?

Best promotion: We’ve spent far too long waiting for Rosita to show off a skill other than impressive sass. Her ex-military insight into disarming explosives was exactly what she needed to get out of the background for once.

Most missed: We didn’t see what happened to Eugene this week, and we weren’t prepared for how much we’d miss his spectacular lexicon.

Best hunting: The Saviors checked everywhere for Daryl . . . including behind a table full of dishes. That’s great, but did you look under the dumpster?

Michonne, no!: It was a beautiful little speech that our favorite warrior gave Rick after they escaped the horde: “You can smile; we made it. We’re the ones who live.” But it sounded awfully like the kind of speech a character gives right before their time on the show is up. And with Danai Guierra’s career getting bigger everyday . . . stop talking, Michonne!

In Memoriam: If you are curious, the person who had a tribute card at the end of the episode, James Heltibridle, worked in TWD’s props department and was killed in a car accident in November.

Best exchange:
Sasha: “I knew what was coming. I knew that king guy would say no. But it still pissed me off.”
Rostia: “The hell you telling me for? We both had sex with the same dead guy. Doesn’t make us friends.”

Best kill: A horde of walkers is no summertime picnic to deal with, even with explosives, cars, and a steel cable. Just in time for Valentine’s Day, our favorite loving couple not only had to maintain similar speed, but also distance from each other as they kept the cable taut and sliced through hundreds of corpses like a knife through softened butter. The resulting bloodbath gave us plenty of gruesome splatter and a moment that will go down in TWD history.

Best kill . . . ever: No, seriously, that really was. We’re not sure how the show is going to top this one. But if there’s any man who can make it happen, it’ll be Greg Nicotero.

Episode MVP: The group. Finally, for the first time in a long time, this episode featured just about every single character currently billed on the show. And teamwork was the name of the game: Working together to unite the colonies against Negan, taking down the horde and gathering the explosives, and seeking out Gabriel’s whereabouts. Fingers crossed that the show stops with the multi-arcs and finally focuses on the core cast for a while.