Home News & Opinion Hollywood of the South The Walking Dead Awards: Sasha and Rosita take matters into their own... 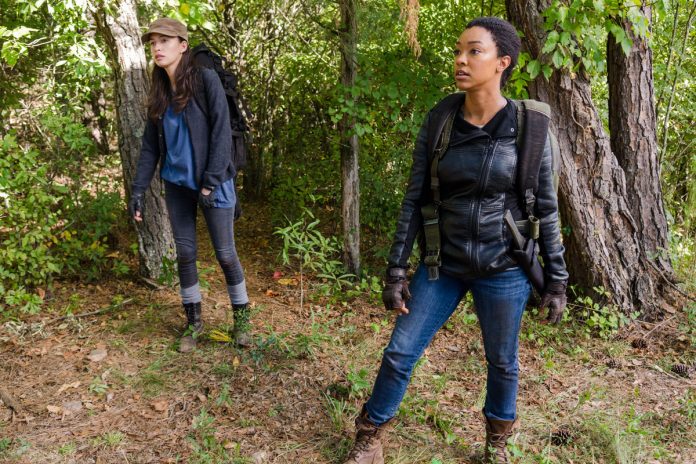 Each week, we comb through the guts of The Walking Dead, much like a horde of hungry walkers, to bring you the episode’s best moments, surprises, and other post-apocalyptic curiosities. This week: Sasha and Rosita have a bad plan, Gregory has a bad plan, and Enid has a bad plan.

Most obvious foreshadowing: As we’ve mentioned before, in the TWD comics, Maggie eventually becomes leader of the Hilltop. And as Sasha prepares to leave to kill Negan, she tells Enid, “[Maggie] is the future of this place.” So we assume the TV show is sticking with that plot point.

Best throwaway exposition: It’s a good thing Sasha dug that tunnel that just happened to never be mentioned, used, or shown before.

Best DIY: Simon mentions that someone at the Savior compound makes a mean cardamom gelato. Want to serve this at you next TWD viewing party? Here’s a recipe.

Crackshot: When Rosita and Sasha are peeking through their rifle’s scope on Negan’s compound, it sure looks like there’s a lens cap still on it.

Best resolution: After weeks of snide comments and an entire episode’s worth of biting remarks, Sasha and Rosita finally buried the hatchet and became friends again. Well, until Sasha locked Rosita out of the Savior compound. That’s gonna be an awkward conversation if she survives. (Not likely, as Sonequa Martin-Green has been cast as the lead in Star Trek: Discovery.)

Biggest mystery: Is Eugene a traitor? Judging from his confident spiel over the walkie and his refusal to leave with Sasha and Rosita, it seems like he’s completely fallen under Negan’s spell. It wouldn’t be all that shocking—insecure Eugene finds a place where he’s treated with respect and is reluctant to leave it. But we’re still hoping this is all a long con.

Best evidence for a long con: If you are on Team Eugene is Not a Traitor, look no further than the fact that he didn’t immediately rat out Sasha and Rosita.

Who’s that Pokémon?: Place your bets now. Is the shadowy guy with the crossbow Daryl or Dwight? (Our money’s on Dwight, but that doesn’t necessarily mean Rosita’s toast.)

Best line: “You’re one of the good things in this world. That’s what Glenn thought, and he would know ’cause he was one of the things, too.” —Maggie to Daryl

Best kill: In one scene, Sasha and Rosita each killed a walker in perfect synchronized motion. And the gold medal goes to . . .

Most disturbing image: Gregory popping open a bottle of tequila, Simon’s new favorite liquor, near the episode’s close. Seriously, does this guy have even a fragment of a backbone?

Episode MVP: After really struggling to find a winner this week, we’ve decided to give it to Enid. Why? Well, out of all the stupid, half thought-through plans, her theory to distract the Savior from finding Maggie and Daryl with “veggies” was the best. It actually had a 50/50 chance of working. You might think those odds aren’t great, but compared to the suicide mission, it’s positively brilliant.

And sadly there were no Rick Grimes moments to register on our crazy-meter this week. But hey, at least we got a Eugene line, right? Right? Yeah, we know this episode wasn’t very good.