Home News & Opinion Hollywood of the South The Walking Dead Awards: The Saviors are stressed out 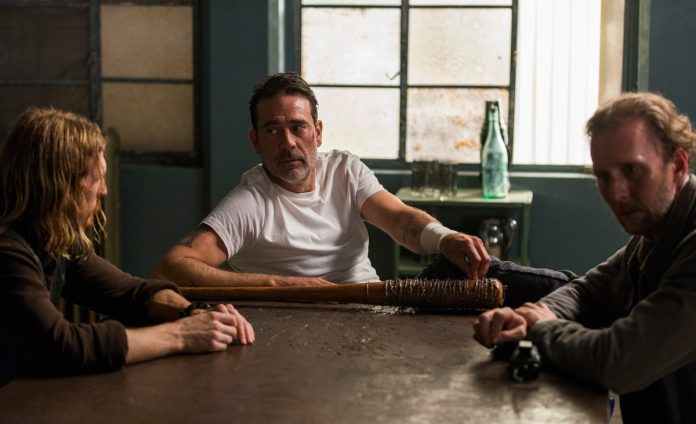 Each week, we comb through the guts of The Walking Dead, much like a horde of hungry walkers, to bring you the episode’s best moments, surprises, and other post-apocalyptic curiosities. This week: A truck makes a racket, Gabriel kneels, and Negan’s nu . . . you know the rest of the rhyme.

Wait for it: No, you didn’t miss anything—it took about 15 minutes before we got to the opening credits (though this was an extended episode).

Best blink-and-you’ll miss it: Sure, Negan hit the table with Lucille quite a bit, but a sharp eye will notice a lot of dents at his end. Just how many times has Negan had to make a dramatic point over the years?

Best power vacuum: We always assumed Negan’s house was built upon sand, but considering how quickly things devolved when he was presumed dead, we’re wondering how everything’s been kept stable so far. After all, the workers do have the numbers.

Saw that coming: Rick and Daryl have been knocking horns for weeks, so them getting in a fist fight was no real shock. They still saved each other when the explosives detonated, before coldy parting ways. Assuming Daryl doesn’t croak, these two will be besties again before the season finale.

Missed opportunity: You know what redeems someone for locking their entire congregation out of their church during the zombie apocalypse? Tackling a megalomaniacal despot while trying to navigate a horde of walkers. You could have ended everything right then, Gabriel!

Biggest question: Was Gabriel bit by a walker during his and Negan’s escape? Or is it from slathering himself with decaying walker guts, as Negan suggested?

Second biggest question: Who the heck still has a helicopter?

Third biggest question: Why does Rick keep running into people with helicopters?

last chance: Eugene knows that Dwight is the mole. And Eugene seems to now have an okay relationship with Dwight, even offering to share his “primo cukes” after Dwight took some of the heat off him during the meeting with the Savior leaders. So, to our mullet-haired friend, consider this your last chance to finally, finally, pick the right team and help Dwight, rather than rat him out.

Essential accessory: When Negan arrives back inside the Sanctuary, he spouts off a boastful little rhyme that, among other, ahem, attributes, highlights his leather jacket. But that signature jacket is now soaked to the lining with zombie innards. Here’s hoping he has a spare.

Best exchange:
Negan: Your friend Rick is an asshole.
Gabriel: You’re an asshole.
Negan: Yeah, I am. But he’s gonna get people killed.

Best kill: The power at the Sanctuary. Because, apparently, in absence of Negan, we’re only twenty minutes away from the breakdown of civilization without it.

Episode MVP: Negan. He formulated and executed a successful plan to escape the walker horde. He didn’t kill Gabriel (although he got pretty close) and worked with him instead. He shut down the Savior worker uprising just by showing up. Dude’s a psychopath, but he’s the only character this episode whose plans went off without a hitch.