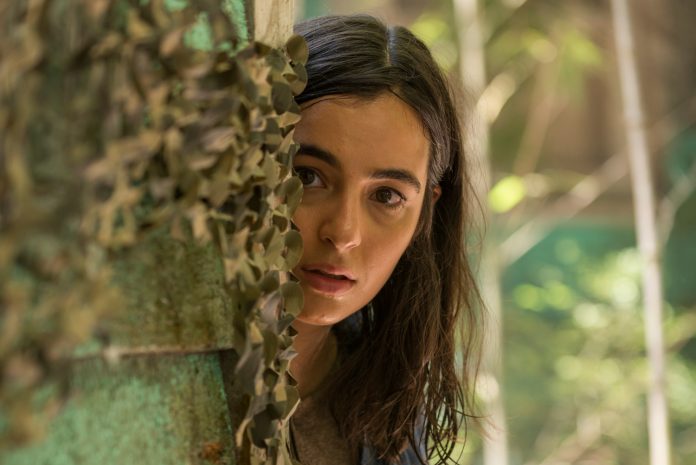 Each week, we comb through the guts of The Walking Dead, much like a horde of hungry walkers, to bring you the episode’s best moments, surprises, and other post-apocalyptic curiosities. This week: Tara falls in the water. Tara washes up on a beach. Tara eats a fish . . . did we accidentally watch Fear the Walking Dead?

Most obvious: With roughly 110 miles of Georgian coast to choose from, maybe don’t shoot at the most iconic spot, Jekyll Island’s Driftwood Beach, when the episode is supposed to be set in Virginia.

Worst employee: Tara is carrying a gun with Lucille carved into the handle, and Heath has a gun as well. Yet apparently neither was noted in the Alexandria log book because Negan didn’t notice them missing. Olivia is really, really bad at her job.

Most feminist: Like Tara, at first we thought Oceanside was a women-only community where men were unwelcome. But then we learned the Saviors actually slaughtered every male in the community. It’s only the “shoot-on-sight” policy keeps the community all-female.

Worst survival tactics: A two-lane bridge might seem like a great place to camp, with ample fresh water and presumably fish, as well as shipping containers to block off incoming walkers. But if you do get overrun, you’re trapped unless you want to jump for it, and then you lose all your gear.

Laziest last resort: Got too many incoming walkers? Dump a truck of sand on ‘em. It’s rough, coarse, and gets everywhere.

Most consistent ethics: Even when teaching the deadliest of lessons to the Oceanside Community, Negan still didn’t kill any women. That’s, um, a step in the right direction?

Best sense of humor: Tara’s easy-going demeanor gave this episode more punchy one-liners than usual, but her strut back to Alexandria in bright-red plastic sunglasses proved she’s the queen of staying cool in the apocalypse.

Biggest question: We know Eugene was forced to deliver the bad news to Tara, but do you think he mentioned what happened immediately after Denise’s death? Specifically his . . . special attack?

Toughest code: Heath left behind a key card with “PPP” written in Sharpie. What does this stand for?

Perplexing “PPP” Postulates: Power Point Presentation: Heath has come up with a plan to beat the Saviors and needs to share it succinctly. Public Policy Polling: Heath knows what really happened during the 2016 election. Purchasing Power Parity: Heath wants to set up an exchange rate between all the settlements. Public-Private Partnership: Heath wants to finance a new stadium, but refuses to pay for it, even though he could easily afford to. Postpartum Psychosis: Um . . . guys, is Alanna Masterson okay?

Best exchange:
Tara: Are you sure there isn’t a fishing boat called a larder? Cause I’m like pretty sure—
Natanya: There isn’t.
Tara: Yeah, fair enough.

Best kill: Literally everyone who’s ever come into contact with the Oceanside Community before Tara. Because somehow the Saviors haven’t found the community surrounded by bells and air horns. So either they’re deaf, or, as we assume, there’s a whole bunch of dead bodies near the beach.

Most disturbing image: Rachel, AKA Lizzy 2.0. Not nearly as crazy, but even more murderous. It’s a good thing Carol didn’t find the Oceansiders, or this girl would be seeing the flowers and sleeping with the fishes before supper.

Episode MVP: Tara had ample opportunity to run with the theme this episode so bluntly beat us over the head with—every man for himself—but she always chose the side of caring for others. She refused to abandon Heath on the bridge. She wouldn’t kill Beatrice even though the Oceanside resident tried to kill her twice. And she refused to rat out Oceanside even when Rosita, Tara’s companion for ages now, was desperate to find new weapons. Tara is showing just how loyal she is and displaying some immense character growth, which means . . . uh-oh . . .

And sadly, Rick was absent from this episode, so we can’t pinpoint him on the Rick calm/crazy scale this week. But we assume he had an equally entertaining adventure where he ran into an all-male mountain camp and found the perfect eye patch for Carl only to come home and find out Carl ran away to kill Negan.