Winter is upon us. It’s cold, the trees are barren, and the production signs are drying up. Don’t fret! It’s only the customary winter break in filming. We’ve still got a few sightings, a few new films starting up this January, and a preview of what you’ll see in town this spring.

More productions will start to come online in the next few weeks, but a few have already started. One of our newest resident films, Dirty Grandpa (Production Code: DG), began filming near Howell Mill Road and Marietta Street last week. Crews were also spotted near Inman Park, and a scene was filmed at the Delkwood Grill in Marietta last Friday. Dirty Grandpa stars Zac Efron as a wound-up guy tricked into taking his perverted grandfather (Robert De Niro) down to Florida for spring break. Also look out for Aubrey Plaza of Parks and Recreation fame in town for this movie.

On Monday, Ben Affleck’s new project, The Accountant (Wolf), started filming off of Mitchell Street downtown. Affleck plays an accountant who spends his nights working as an assassin. This one’s actually been in development for a long time, according to Variety, which reported that Will Smith was once attached and Mel Gibson was slated to direct in the past. We’re just glad that when this film did end up being shot, it was here in Atlanta. The Accountant also stars Anna Kendrick and Academy-Award nominated actor J.K. Simmons along with Jeffrey Tambor and John Lithgow.

The second season of MTV’s Finding Carter (WHO) started production last week in Fairburn. The series focuses on Carter (Kathryn Prescott), a teenager who was abducted as a toddler and lovingly raised by her kidnapper. After being reunited with her biological parents, Carter must assimilate into a new life while trying to reunite with the woman who raised her.

Insurgent (Mineral) has also finished up its reshoots. In early January, crews were filming downtown, mostly indoors, but on the January 11, many people reported loud booms heard throughout Midtown, downtown, and the Old Fourth Ward. Of course the city wasn’t in danger, it was just Insurgent (re)shooting something action-packed. Oddly enough, this wasn’t the only YA film to frighten Georgians that weekend. On the same day, The 5th Wave (Sheldrake) filmed an overzealous explosion in Macon that ended up damaging nearby buildings.

Now, I mentioned that around Christmas, filming slows down. Crews work their butts off, often for 12 hours at a time, and sometimes overnight. It’s only fair that they get a decent break for the holidays. Unfortunately, for you and me, that means yellow signs are rare this time of year. Spring 2015, however, will bring us a cornucopia of productions. Keep an eye out for Selena Gomez in The Revised Fundamentals of Caregiving (RFOC), which should start filming this week. Also Melissa McCarthy will soon be in town to film Michelle Darnell; AMC’s Halt and Catch Fire (HCF) will shoot its second season in the coming months; and the next big one, Captain America: Civil War will bring Chris Evans, Scarlett Johansson, and Robert Downey Jr. to town this April. It looks like its already going to be another exciting year here in Y’allywood. 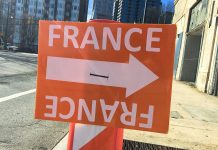 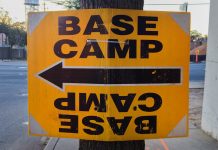