Home News & Opinion Hollywood of the South What’s filming in Atlanta now? Stranger Things, Superintelligence, The Mule, plus our...

Metro Atlanta continues to bustle with film and television productions, keeping the Hollywood of the South busy. Here’s your full roundup of what we saw filming in July.

New this month, Diane Keaton, Alisha Boe, and Charlie Tahan are shooting Poms (production code: SUN SPRINGS). The comedy focuses on a retirement community outside of Phoenix, Arizona, where America’s first cheerleading squad for 60-year olds forms. Poms was first spotted in Forest Park and Lake City between July 9 and July 11. After that, production moved south to Hampton. During that time, a basecamp was set up at Hampton High School. On July 16, signs were spotted near Pinewood Atlanta Studios in Fayetteville. A cheerleading competition scene was shot in Duluth, at the Infinite Energy Center, between the 19th and the 20th. Most recently, from July 23 through the 25th, crews worked out of Griffin.

Melissa McCarthy is back in Atlanta working on a new film, Superintelligence (S&K), about a woman under observation by an ambiguously malevolent artificial intelligence. Bobby Cannavale and James Corden are also attached. Superintelligence started production fairly recently, first spotted on July 18 in Inman Park. The next day, signs were posted along Briarcliff Road. Between July 20 and 21, scenes were filmed in the constantly utilized Fairlie Poplar neighborhood and on the 25th, crews were working out of Little Five Points. The next stop will be downtown, for a fictional baseball game involving the Seattle Mariners.

Way back in the year 2000, Disney produced Life Size, a film about a Barbie-esque doll coming to life starring Lindsay Lohan and Tyra Banks. For the past six years, there have been reports of a sequel in the works. Now, production has finally begun on Life Size 2 (2LS). Banks is returning as the living doll, Eve, though without Lohan as a co-star. (However, in April, Banks hinted at the possibility of Lohan appearing in the film in some capacity.) Between July 14-17, a basecamp was set up at Northside Drive Baptist Church in Buckhead. Signs were up in that area again on the 20th, and scenes were shot at a home near Moores Mill Road and West Paces Ferry Road on July 24. Life Size 2 is set to premiere on Freeform this Christmas and also stars Francia Raisa and Alison Fernandez.

Much like with Jumanji, Dwayne “The Rock” Johnson is in town to film the non-Hawaii portion of Disney’s Jungle Cruise. The film will mostly be shooting on sound stages, however, so don’t expect to run across a scene. The working title for this one is ELIXIR, but we haven’t actually seen it on a sign yet. Jungle Cruise also stars Emily Blunt, Jesse Plemons, and Paul Giamatti.

Facebook is entering the streaming content business with its own original programming. One of their shows, Queen America (WTM), is a dark comedy staring Catherine Zeta-Jones, Belle Shouse, and Victoria Justice. The series will follow Vicki Ellis (Zeta-Jones), a ruthless beauty pageant coach known for being able to turn any girl into the next Miss America, and Samantha Stone (Shouse), the unpolished girl she’s been paired with. And yes, it does appear that Queen America is currently using a recycled code from Brockmire. In late June, a scene was shot inside the Fry’s Electronics store in Duluth. Between July 4 and 6, crews worked in Jonesboro. We saw WTM signs posted at I-285 and Ashford Dunwoody Road on July 9, and more filming in the Perimeter Center area took place the next day. On July 13, signs were in Buckhead near Lenox Square. More filming would take place in Buckhead between the 18th and 19th. On July 20, the series was in Midtown, shooting at the Biltmore. They were spotted again in Midtown on July 23.

If you live near Marietta Square, you might have seen quite a bit of filming this month. Tyson’s Run (FCE), about an autistic boy training to run a marathon as a way to connect with his distant father, took over for an extended period from July 9 to July 24. We spotted the nearby basecamp at St. James Episcopal Church on the 13th. And if you keep seeing lights and trailers not too far from the Big Chicken, odds are it’s still for Tyson’s Run. According to the Marietta Daily Journal, about 70 percent of the film will be shot in town. Tyson’s Run stars Major Dodson, Rory Cochrane, and Amy Smart.

What we originally thought to be reshoots for Night School have turned out to be a new production. Starring Issa Rae, Justin Hartley, and Marsai Martin, Little (GED) will tell the story of a woman who gets the chance to relive her younger life, without all the pressures of adulthood. We saw crews for Little mainly in Buckhead this month. On July 7, production was set up at Sutton Middle School off of Northside Drive. GED signs would continue to pop up in the area between July 9 and 11, on the 13th, and on July 18.

Based on the 2014 fanfic-turned-novel written by Anna Todd, After (PSI) is about a young girl and her whirlwind romance with Harry Stiles of One Direction fame. No really, that’s what it’s about. Sure, the guy’s name has been changed to Hardin Scott for the book and film, but Styles is who it’s supposed to be. On July 18, After shot at Emory University. The next day, the production was spotted near the Briarcliff Mansion. July 20 took the production to Glenwood Park and on July 21, they shot at Videodrome in Poncey-Highland. After stars Hero Fiennes Tiffin, Josephine Langford, and Meadow Williams.

Stranger Things (PCF7/MCFLY/1080/BLK45) stuck around this month, starting July in Stone Mountain before setting up a basecamp at St. Thomas the Apostle Catholic Church on July 9. Signs were up on July 10 off of I-20 and Lee Road in southwest Atlanta. On the 12th, crews worked in Douglasville. Some signs have since been posted near EUE/Screen Gems, but all in all, filming recently has been pretty quiet and security’s been tight. What we did see, however, was a new teaser for season three: Netflix released an 80’s-tastic fake commercial for Gwinnett Place Starcourt Mall.

Clint Eastwood’s The Mule (KIKI) continued shooting into July after finishing up June in Smyrna. On July 2, a basecamp was spotted at the Cheshire Motor Inn off of Cheshire Bridge Road. The next day, filming took place in McDonough. Crews were spotted at North DeKalb Mall on July 5. After that, the production traveled to Rome. Between July 10 and 12, mostly interior scenes were shot downtown, just off of Marietta Street near Fairlie Poplar. A basecamp was also set up at Norcross High School on July 12 for additional filming. We last saw KIKI signs in Lawrenceville on July 13.

Black Lightning (LOC) is currently shooting its second season around Atlanta. The CW series has mostly been on sound stages near Decatur this month, but briefly appeared in downtown Atlanta for a rooftop pool scene on July 11. Additional LOC signs were also spotted on July 25 off of Collier Road.

Now We Here (CK), the YouTube Red comedy series about up-and-coming rappers, was spotted in Kennesaw on July 6 and 7. On the 9th, crews were out at Electric Cowboy. A basecamp sprang up at the Second Mt. Vernon Baptist church on July 10, with nearby filming taking place in Glenwood Park. Between July 22 and 24, signs were posted near Peachtree City.

MacGyver (EYE) made its usual rounds this month. We saw filming in Loganville on July 10, Conyers on the 12th, and in downtown Atlanta on the 13th. Crews also worked in Lithonia on July 16 and at Peachtree Dekalb Airport on the 23rd. Most recently, we saw EYE signs leading into Piedmont Park near the Atlanta Botanical Garden on July 24.

Also this month, Dynasty (CROSSEYE) had a basecamp at North Gwinnet High School on July 20. Stuber (STU) signs were posted near the Lakewood MARTA station on July 3. The Walking Dead (SF) shot in Griffin on the 18th. FOX’s The Resident (TR) was working in Conyers all throughout the month. The network’s other series, The Gifted (HVN), finished up June at the Silver Skillet before shooting in Newnan on July 6. The show was also in College Park on July 9 and between July 12 and 13. Also, the CW has started production on a new vampire series to fill an Originals-sized hole. Legacies (TOGS) is currently using the old signs and is shooting in Conyers.

And finally this month, although San Diego Comic-Con has wrapped up, it left a bunch of trailers, clips, and news tidbits pertaining to the Hollywood of the South. Aside from the Stranger Things teaser we mentioned earlier, we got a first look at The Walking Dead’s ninth season. This one is a little bittersweet, however, as the season will be Andrew Lincoln’s last as Rick Grimes.

And although we don’t know much about Avengers 4 (except that it cost us everything), Marvel offered mock grief counseling sessions for fans that just couldn’t take the Snap. The walls were adorned with motivational posters such as “You are stronger than Vibranium,” and “We are Groot,” as an actor led a group session asking fans questions about their favorite moments from the Marvel Cinematic Universe. To top it all off, as fans exited, there was a “group hug” photo op with the Hulk to sooth away their pain with a tight embrace. 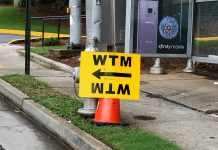