I don’t mean to alarm you, but the number of famous people in Atlanta has reached a critical mass. The recent spring thaw means we’ve got productions coming out the wazoo. It’s also television pilot season, and we’ve got five shows filming in north Georgia. Of course all this information is meaningless if you can’t brag to your friends exactly who you saw filming last week. Let’s go to the breakdown!

Four of those pilots have already begun shooting. CW’s apocalyptic “Cordon” (Production code: 1159) centers around Atlanta quarantined after a deadly outbreak. (Haven’t we seen that idea before?) HBO’s comedy, “Brothers in Atlanta” (BIA), will focus on struggling entertainers finding their way through our city. NBC’s “Game of Silence” (GOS) tells the tale of a rising attorney with a dark past coming back to haunt him. ABC’s “Quantico” (Q) builds around young FBI recruits unaware that one of them will soon be responsible for the worst terrorist attack on US soil since 9/11. Another ABC pilot, “The Kingmakers,” about a man infiltrating the world of an Ivy League school to find his sister’s killer, will start soon in Rome.

Keen-eyed readers might notice something unusual about the production code for “Cordon.” Yes, it’s the same as last year’s “Constantine.” As of today, NBC has not renewed “Constantine,” which means it’s probably going to be cancelled. If you’re confused as to why the code is being reused,  Turns out there’s a straightforward explanation as to why these two productions share a code. As confirmed by FanBolt.com editor in chief Emma Loggins, as well as Dodd Vickers, a “Constantine” key assistant location manager, the signs simply refers to the address of the production office used by both shows.

So far we’ve seen “Cordon” near Peachtree Center on March 18, and spotted signs for this, as well as two other productions, off of Howell Mill Road and Chattahoochee Avenue the next day. If you want to (respectfully) crane your neck for stars David Gyasi, Christina Moses, and Chris Wood, they’ll be filming in Castleberry Hill on March 24 and 25.

“Brothers in Atlanta” signs were spotted off of Cascade Road near the Perimeter on March 5 and downtown on March 12. Find one of those BIA signs and you might see Diallo Riddle, Bashir Salahuddin, Maya Rudolph, or Jaden Smith. “Quantico” was also filming near Benjamin E. Mays High School last week. “Game of Silence” was in Brookhaven on March 15, and was part of the mega sighting at Howell Mill Road on March 19.

Would you believe there’s a third “Alvin and the Chipmunks” movie? How about a fourth? The upcoming fourth installment, “Alvin and the Chipmunks: Road Chip” (AC4), started production last week, and signs were spotted off of Peachtree Road and 14th Street. The squeakquel (their words, not mine) also set up its basecamp in Atlantic Station on March 17. You might see Jason Lee or Kimberly Williams-Paisley on set, but don’t expect to see Matthew Gray Gubler, Justin Long, or Jesse McCartney until they’re CGI rodents on screen this winter.

Another film, Melissa McCarthy’s “Michelle Darnell” (Darlings), was spotted off of Howell Mill Road on March 11 and this last Friday in Midtown off of a parking garage near 4th Street. Kristen Bell also stars in the film, but honestly, none of that matters because so does “Game of Thrones” mainstay Peter Dinklage. Go find him.

We’ve also seen “90 Minutes in Heaven” (90M) filming this past month—mostly OTP. Kate Bosworth and Hayden Christensen (#NotMyAnakin) star in this story of a man pronounced dead only to come back to life 90 minutes later claiming to have seen heaven. Production signs were spotted late last month near Marietta and more recently on Howell Mill Road and Chattahoochee Avenue with the others we mentioned. Production just wrapped, so I’m sorry to say you won’t have a chance to remind Christensen of this.

BET’s “Being Mary Jane” (SNC), the Gabrielle Union/Lisa Vidal show about a successful TV reporter and her continuing search for love, is currently shooting its third season. In early March, signs were found at Marietta Street and Joseph E. Lowery Boulevard. On March 9, the cast and crew were in Buckhead, and last week, East Atlanta Village was graced with the series’ filming.

Ben Affleck’s “The Accountant” (Wolf) was spotted at Sandy Springs and downtown Atlanta late during February. Currently, they’re shooting at Georgia Tech. “Devious Maids” (DM) started March out in Druid Hills and since has moved to Buckhead. AMC’s “Halt and Catch Fire” (HCF) filmed in Snellvile at the end of February and can currently be found near Doraville. Out in Bostwick, Selena Gomez, Zach Braff, James Franco, Josh Hutcherson, Ed Harris, Robert Duvall, Nat Wolff, and Bryan Cranston are working on the adaptation of the John Steinbeck novel, “In Dubious Battle” (IDB). If you don’t want to drive the 90 minutes out there, production moves to Senoia at the end of the month.

Coming up, “Rings” and Anna Kendrick’s “Table 19” will begin production this week. Georgia’s also going to poach Fox’s “Sleepy Hollow” from North Carolina. “Captain America: Civil War” will begin filming around the end of April. And speaking of Marvel, if you haven’t heard, Peachtree City’s Pinewood Studios is going to get Chris Pratt and “Guardians of the Galaxy 2.” With all these celebrities filming or about to be filming in Georgia, I suggest you forgo your weekend plans and people-watch at Lenox or Buckhead Atlanta instead. 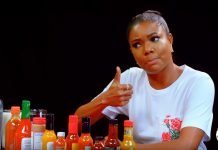