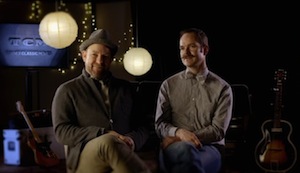 For their latest project, Grammy-winning Sugarland brothers Brandon and Kristian Bush have ventured far afield of their usual country-pop hybrid. The Bush bros reached back to classic cinematic composers, including Max Steiner, Bernard Herrmann, Elmer Bernstein and John Berry for inspiration after the two Turner Classic Movie nuts got the assignment to pen a score for a brand-new 30-second TCM ID, marking the Atlanta-based cable channel’s 20th anniversary.

“I’ve always wanted to be a composer,” explains Brandon Bush. “It’s what I’ve always wanted to do and working with TCM was a great way to learn and bring that passion to the table. This was a natural ‘Yes!’ for us.” And while Brandon Bush’s arrangement is decidedly short, the composition is lush, employing string players, horns and stand up bass to bring his score to life.

During the sessions at the brothers’ Decatur home studio and Atlanta’s Crawford studios, Kristian’s job was to be a sounding board for the individual instrumentalists as the musical pieces of the score were assembled. Says Kristian Bush: “One of the things I love about this project is the musicians we’re working with are all in their thirties, but are curious and interested and innovating in their field. It’s an entire generation of people facing forward but looking back. It just inspires me.”