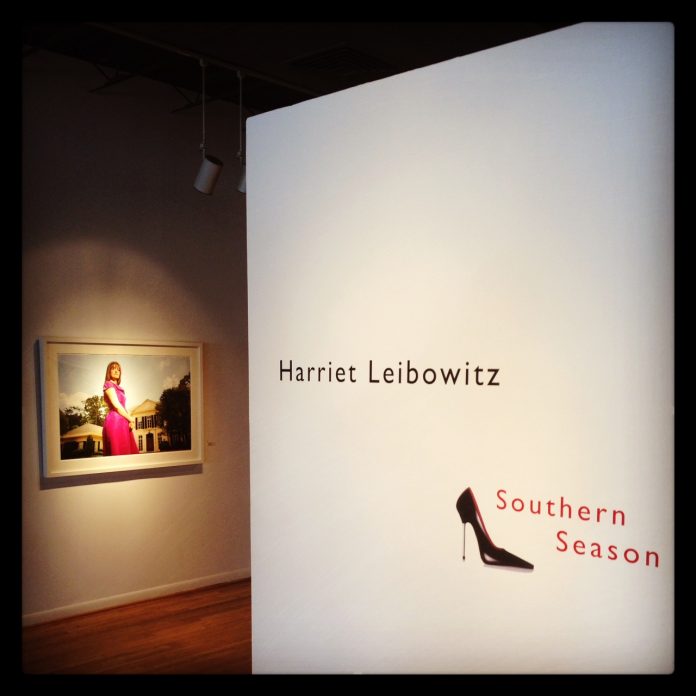 Like a juicy divorce rumor circulating on Tuxedo Road, Southern Season, the exhibition by Atlanta photographer Harriet Leibowitz opening tonight at the Alan Avery Art Company, is certain to generate gossip and a few tantalizing texts. The thought-provoking, sexy, campy, and slightly scandalous show depicts what might be bubbling beneath the shiny surfaces inside the city’s social set. Essentially, it’s Southern Seasons magazine on a hit of acid.

On an advance tour of the show this week, the Atlanta native told Atlanta magazine: “I’ve always been interested in what is and what appears to be. This is an idea that’s been germinating with me for years. I’ve always managed to avoid getting sucked into this life. I easily could have. You know, that whole charitable scene. But I always resisted. I’m more interested in chronicling things. This is a show about the battle between order and chaos. This is what’s really going on, the underbelly, what’s going on after those society luncheons and those charity balls. There’s just a little twist in each photo. This is a show about empowering women. It’s the women in this city who hold the power. Without them, we wouldn’t have the charity balls or fundraising.”

While the faces in the show are familiar to anyone who has ever leafed through the society section of a magazine or newspaper, Leibowitz cautions, “While these models are people that you know, let me be clear: These photographs are metaphors. It’s not about their personal lives. These are merely symbols. Every single person will bring their own experiences with them into this gallery.”

The Season, the title image in the show, was shot on the winding staircase in the lobby of the St. Regis hotel, where many a designer-decorated foot has trod on the way into a charity ball. At first, the photo appears to be your obligatory posed charity ball photo, with the ladies in gowns and jewels and the husbands dutifully decked out in tuxedos. But look closer. One of the ladies is positioned off to the left, with her hand pressed onto the chest of her boy toy date, as the rest of the steering committee glares its disapproval.

In the image Pass the Salt, Please, socialite and Atlanta Ballet benefactor Merry Carlos, meanwhile, is daintily cutting into a sliver of turkey at a table in her formal dining room, a pistol at her elbow and sitting across from an ashen-hued husband bleeding out in his plate. In real life, of course, Carlos’ ex-husband is Chris Michael Carlos, the CEO of National Distributing Company, who took over the family business after the passing of the company’s chairman and Emory University museum namesake, Michael C. Carlos. On behalf of his parents, the couple had donated four million dollars to the ballet.

Many of the models in the show were recruited by veteran Carter-Barnes Hair Artisans make-up wizard Kiev Osborne (who is now overseeing her own Buckhead shop, The Make Up Unlimited). And yes, the revolver is real. Finding one wasn’t exactly an issue. “Everybody in this city has a gun!” Leibowitz says laughing. “The props were easy, believe me!”

A pair of prominent Buckhead doctors lent their home to Leibowitz for the shoot of Tough Day?, a photo of a power-suited wife coming home to a husband on all fours, polishing the foyer floor with a bottle of Olde English.

“Everyone was astonishingly generous with their time, their ideas and their homes,” the photographer says.

For Showtime, former Atlanta model Adam Gates flashed more skin for Leibowitz than he ever has on a shoot. In the photo, his real-life girlfriend, a bored-looking Klarissa Hill, ignores Gates’ considerable assets, on display in the photo’s foreground, in search of the TV remote. “Thank God Adam was feeling good about his ass that day!” Leibowitz says, grinning. “He was a great sport.”

Atlanta PR guru Liz Lapidus, meanwhile, is eternally grateful to the photographer for asking her to portray a bored Buckhead Betty, out for a ride at Chastain’s horse park, as a silhouetted shirtless Latino stable hand (portrayed by Atlanta model Mateo Restrepo) waits in the shadows. It’s one of the last photos of Lapidus’ beloved Irish Warmblood Hardy, who died unexpectedly days after the shoot.

As a veteran fundraiser, model, and Catwalk Productions president, Randi Lane has posed for thousands of photos. But Leibowitz’s image of her with Gates, titled, Just a Minute! is certain to shock even her closest friends. Portraying a harried businesswoman buried in her laptop, clutching a cellphone, Lane extends an index finger in Gate’s direction, who is shirtless, lounging in an ornate chair, his pants unbuttoned. It’s the object extending out from Lane’s crotch that is the showstopper in Seasons. “I couldn’t wait for that one,” Gates explains from his home in Boulder. “I kinda have a thing for shock and awe. I just put myself in that situation and hopefully it came across in the photo.” Adds Leibowitz: “Randi is the best woman in the world. We worship each other. She kept saying, ‘I can’t believe I’m doing this!’ For the rest of my life now, whatever Randi asks me to do, I have to do it!”

While Leibowitz anticipates a less than positive reaction from some in the city’s social scene, she smiles and shrugs off any criticism. “At another point in my life, I don’t think I could have shot this show. I’m a little older now. I have the experience and the confidence. If anyone gets offended, they’re way too serious about all this. Artists are supposed to make people think. We’re not supposed to create in order to decorate over someone’s sofa. Who wants to photograph the obvious? This dichotomy exists in our society. We have this image we put out to the public that says, ‘everything is in control’ while in reality, behind the scenes, everything is in chaos. Either that, or you’re boring as shit. Take your pick!”

Southern Season by Harriet Leibowitz opens tonight from 7 to 10 p.m. and will run through October 5 at Alan Avery Art Company, 315 East Paces Ferry Road in Buckhead.