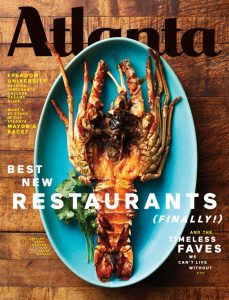 This October issue of Atlanta magazine is well overdue!  Our Annual Best New Restaurants issue is here as the cover says – “FINALLY”.  Few industries have been impacted the way restaurants have and we’re pleased to celebrate these new favorites who have endured and prospered.  And, we pay homage to restaurants that we simply can’t live without – hint, one of them includes waffles.

We often hear from readers who hang on to the Best New Restaurant issue and use it as their roadmap for discovering new dining destinations in our city.  Here are just a few that make the list:  Little Bear in Summerhill, The Chastain in Buckhead, Tum Pok Pok in Chamblee and Nur Kitchen on Buford Highway – just to name a few.  Also in this issue, our longtime restaurant critic, Christiane Lauterbach reviews 8arm’s reinvented menu and gives it an excellent rating.

In keeping with the culinary theme of this issue, we introduce you to Chef Daryl Shular who wants to rethink how cooking is taught and who’s leading the kitchen.  As he says of his students, “They’re going to be the Navy SEALs of the hospitality industry.”

It’s October in Atlanta so that must mean we’re all ready to be haunted by Atlanta’s Halloween “institution” known as Netherworld.  This issue introduces you to its two founders who are celebrating 25 years of being Atlanta’s best nightmare.

There’s much more in this issue from previewing Atlanta’s Mayoral race to a feature on an Atlanta underground school that helps prepare undocumented students for college in Georgia.

Most importantly, we celebrate the fifth anniversary of GIVE Atlanta in this issue!  Starting October 19th, we encourage all of you to support one of eleven deserving non-profits and make a donation to their cause during the GIVE Atlanta Challenge.  These non-profits will engage in a friendly competition to see who can raise the most money for their charities.  Not only will they keep the dollars they raise but the magazine will offer up additional cash grants throughout the Challenge time period which ends on November 9th.  Be sure to spread the word and help by making a contribution.

As always, we encourage you to sign up for one of several Atlanta magazine digital newsletters and engage with us on social media.  Enjoy this month’s complimentary digital edition and start making your dinner reservations now.

If you would like to receive future issues of Atlanta magazine to your mailbox, click here to purchase a print subscription!