Home Uncategorized For locals, the eclectic Madison Drug Co. is an old-school gem

Madison Drug Co. | Madison | 59 miles east of Atlanta
For the past quarter century, Ricky Harris has helped man the chicken fryer at Madison Drug Co., but his specialty is sneaking up on people—fellow employees, town dignitaries, and everyday customers alike—and scaring the bejesus out of them. Harris’s left arm was damaged so badly in a bicycle accident he can’t use it. His boss calls him “precious,” the mayor calls him by name, and he’s become something of an icon at Madison’s most old-school restaurant, situated a block from the historic square in this antebellum jewel that legend has it Sherman deemed too pretty to burn. The people of Madison have come to rely on this eclectic business, which is celebrating its centennial anniversary in 2017, for a bit of everything: a pharmacy that’s on-call 24/7, chocolate shakes, the alleged “best hamburgers in the Southeast,” Christian books, cathartic powwows about county government, and Wednesday night Bible study. The pharmacy provides the financial oxygen, but the grill is the daily heartbeat. The tide of after-school regulars changes seasonally with the practice schedules of local sports teams. The decor of checkerboard floor tile, retro clocks, and sparkly dining booths patterned after 1957 Chevys suggests the Fonz could walk in. It’s so throwback, in fact, they use a system of charge tickets, allowing teen regulars to rack up tabs that mom and dad pay later. “Parents will say, ‘Don’t let Billy Bob feed the whole neighborhood,’” says Luanne Whetzel, who took full ownership with her pharmacist husband, Gary, two years ago. “It’s a very generational business, in that grandparents were served, parents served, and now children are being served.” Whetzel is a Madison native, and though her octogenarian mother once served malts over that same marble countertop as a teenager, she never had ambitions of running the drug store. Then back problems persuaded her husband to leave commercial piloting for pharmacy school, which eventually led them here. “When you own a pharmacy and a food establishment,” Whetzel explains, “you [serve] every spectrum of the population, and it’s a good feeling to know that they feel welcome, and they’re comfortable. It just becomes your heart.” 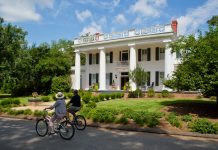 Admire Madison’s white columns in May 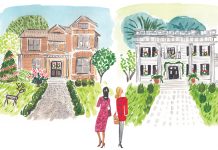 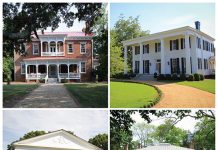