Near Mason Mill Park | 8 miles East of Atlanta
“Bird up!” yells Greg Ames across the wooded hill, silent but for the faint wash of distant traffic, as a red-tailed hawk springs from his leather-gloved wrist. The brass bells strapped to the animal’s legs jingle with each wing flap until she finds a perch on a barren limb some 50 feet up. Her name is Bird No. 7. “You start naming your birds and you start to think they like you,” says Ames. “That’s when you get hurt.” Ames points to an eight-year-old talon scar on the temple behind his right eye, which he got when he was handling his first hawk, Barney, and forgot to remove the leather glove before scratching his head. The birds eat from the glove while being trained. And from their perspective, the relationship with the hawker is all about food. That’s why the year-old raptor streaks from branch to branch, following Ames as he and his fellow hawker, Bill Mixon, try to rustle up some prey—a squirrel, a mouse—from the undergrowth. The sexagenarians shuffle their feet among the dead leaves. They pull marbles from their shoulder bags to sling-shot at lofty squirrels’ nests. Then they move to the next tree, bells tailing them from above, a dance that has been occurring between man and bird for more than 4,000 years. While falconry—as this form of hunting, even with hawks, is known—remains popular in the Middle East and in the U.K., Ames and Mixon are two of only 4,000 licensed falconers in the U.S., around 175 in Georgia. Suddenly No. 7 streaks from the air and crashes upon a brush pile. “She’s got something!” shouts Ames. But by the time the two converge to help No. 7 unclench her talons, they find nothing there. In the distance, a squirrel chirps out something like a warning to the neighborhood, and all is still again except for the bells returning to the treetops and two friends, not the least bit dismayed, walking together through the woods. 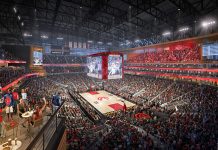 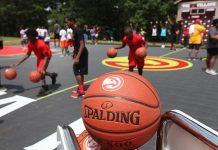 Atlanta Hawks’ vision of success on and off the court