Home Cookbooks “A New Turn in the South” by Hugh Acheson 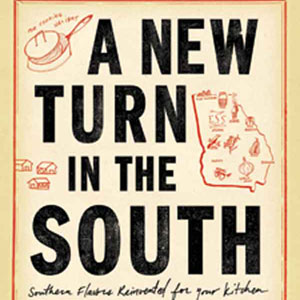 If you dine out regularly at Atlanta’s recent crop of ambitious restaurants, Hugh Acheson’s first book, A New Turn in the South, will have special appeal. It’s the first cookbook to capture the essence of the city’s current idiosyncratic approach to Southern food. If you’ve been to Restaurant Eugene, Miller Union, Cakes & Ale, Holeman and Finch, or Acheson’s Empire State South, you know the style I’m talking about. It’s hybrid-Southern: pork, okra, greens, corn, field peas, and a seasonal rotation of local fruits get heaped with love on these menus, but they may be as likely incorporated into dishes inspired by European or Asian cuisines as they are into recipes that reflect local traditions. Cakes & Ale may include gnocchi with ratatouille and parmesan on a list of appetizers alongside pork ribs with corn puree. On an entree at Empire State South, you may find smoked duck breast combined with Italian apricot mostarda, hominy, and pak choi, a Chinese green.

I doubt that Acheson specifically aimed to translate any specific “movement” of cooking for the home kitchen when writing the book. He was just doing his thing—but the book makes it clear that, when he opened Five and Ten in Athens in 2000, he began developing a style that matches Atlanta’s Dixie roots with its global community and outlook. “Not everything on the menu in my restaurants is Southern,” Acheson, a native of Canada, says in his intro. “Five and Ten incorporates a vast mix of cuisines but always with a Southern stamp: French sauces blanket Southern braises; Greek flavors season coastal mahimahi; grits pair with osso bucco.”

The same breadth of imagination makes his book (released October 18, 2011 by Clarkston Potter) a pleasure to read and cook from—and an obvious choice as a holiday gift. Acheson mixes restaurant-level recipes (veal sweetbreads with baked grits, succotash, and tarragon jus; a version of the Frogmore stew he serves at Five and Ten) with easier dishes like a simple but intense version of cucumber-mint soup or grilled mahimahi with a clever hot sauce beurre blanc. The man fell hard for boiled peanuts when he moved to the South: He incorporates them into hummus (a favorite on the Empire State South menu); risotto with okra, country ham, and ramps; flounder with a boiled peanut beurre blanc; and ice cream. The chapter I’m already flipping to most is on side dishes: Fresh ideas include Brussels sprout leaves splashed with sherry vinegar, squash casserole gilded with Parmigiano Reggiano, saffron-braised celery, and mashed sweet potato with chile, orange zest, and sorghum.

Athens photographer Rinne Allen provides pretty pics that toggle between finished beauties and money shots of fresh produce and meats. And the wry wit that helped Acheson land a gig as a Top Chef judge is abundant throughout the book. On making iced tea he says, “Please don’t flavor it with raspberry, or load it with acai or other superfoods.” Even an adopted son can become a purist about certain sacred Southern customs.

A New Turn in the South
By Hugh Acheson