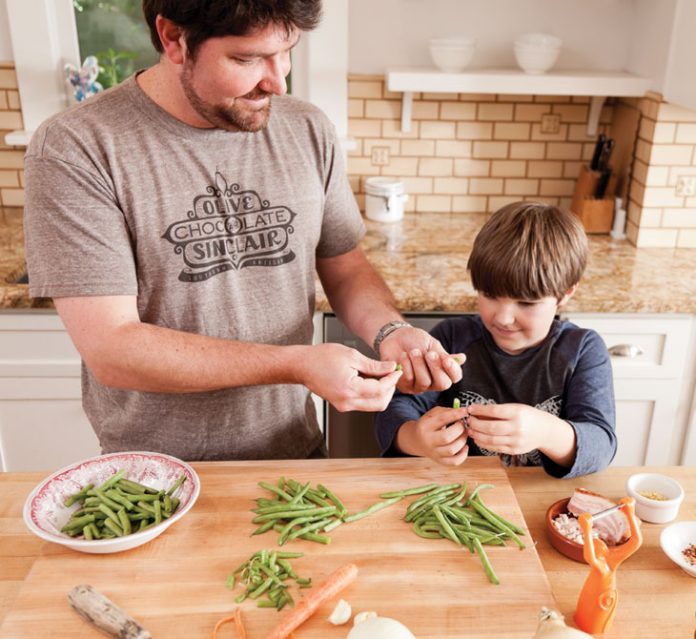 Billy Allin, executive chef and co-owner (with his wife Kristin) of Decatur’s Cakes & Ale, was raised in an Italian American household in Greenwood, South Carolina—an upbringing that presented, as he puts it, “some culinary conflicts.” At home Allin looked forward to the gargantuan family feasts of antipasti, roasted meats, pastas, and innumerable side dishes presided over by his fiery, fast-talking, Napoli-born grandmother. Meanwhile, he developed an equal appreciation for fried chicken, mac and cheese, and other Southern fare served in the homes of friends and at local clubs and restaurants where he worked through his teens.

Yet there were a few dishes common to both kinds of menus—most notably, long-cooked, pork-seasoned green beans. Instead of fatback or salt pork, however, Allin’s grandmother flavored her beans with a little pancetta and served them agrodolce, or “sweet and sour.” They may have been ladled hot from the pot alongside a plate of sliced pork shoulder or roast chicken, or served room temperature on an antipasti platter with sliced tomatoes, cucumber and onion salad, grilled eggplant, roasted peppers, hard-boiled eggs, and all manner of pickled vegetables.

Any green bean will work in this recipe; the younger the bean, the less time it will need to cook. Allin prefers the tougher and meatier Romano or pole beans, especially plentiful in late summer, which develop a deeper, mellower flavor when cooked until meltingly tender. He often begins the recipe with a soffrito, a mixture of finely diced onions, carrots, and celery cooked very slowly in olive oil with bay leaf, which he makes ahead of time and refrigerates in jars to use as a base for a variety of dishes in the restaurant and at home. I found it delicious without it, though that extra layer of flavor certainly wouldn’t hurt.

Instructions
1. If your beans have “strings” on each side, remove them completely. (Many beans found in markets today are of the stringless variety.) Wash and cut into 1 1/2-inch pieces. Place a pot over medium heat and add olive oil. When oil is hot but not smoking, add onion and pancetta and saute until slightly golden. Add garlic, tomato, red pepper flakes, and oregano and stew for 2 minutes. Add sugar and vinegar; reduce liquid until slightly thickened. Add water, beans, 1 teaspoon of salt and a few grindings of black pepper. Cover the pot with the lid left barely ajar, lower heat slightly, and cook until beans are very tender, about 45 minutes for pole beans (regular green beans will take considerably less time.)

2. Taste beans and adjust seasoning as desired. The liquid should be slightly viscous and come a quarter of the way up the beans. If more liquid is in the pot, remove lid, raise heat and cook for a few more minutes to reduce. Serve hot or room temperature. Or, serve cold: Remove beans from the pot, reserving the cooking liquid. Mix reserved liquid with a little more olive oil. Cover and chill separately. Just before serving, return liquid to room temperature, toss with beans, and season with a little more salt and pepper as desired.

This is an extended version of an article from our August 2012 issue.