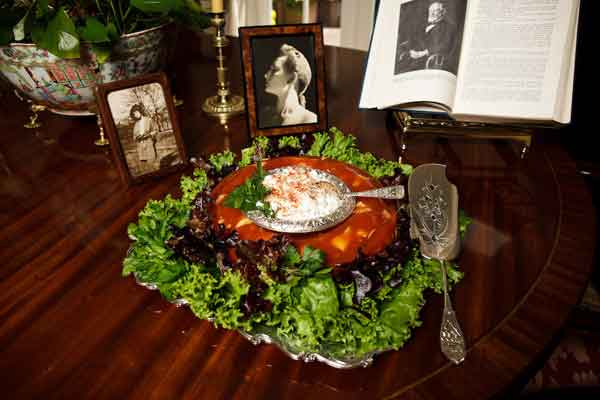 For a lot of folks, the mention of tomato aspic brings one word to mind: Ewww. This is not lost on executive chef Carvel Grant Gould, who wouldn’t dream of putting a congealed salad on the menu at Canoe, the upscale Vinings restaurant where she’s worked since it opened sixteen years ago. But she’s not ashamed to tell you that, personally, she loves the jiggly stuff. Along with curried chicken salad studded with raisins and almonds—another family standby—she makes it for nearly every baby shower and bridal luncheon she’s asked to cook. Its history is almost as lengthy as the heirloom silver platter upon which it is served.

Carvel is a sixth-generation Atlantan. Her great-great-great-grandfather, Colonel Lemuel Pratt Grant, was a major civic leader who donated the land for what is now known as Grant Park. A larger-than-life-sized oil portrait of him hangs in the stairway of the Buckhead condominium where Carvel’s parents, Dan and Ginny Rather, now live and where mother and daughter often still cook together.

Growing up, Carvel was well accustomed to luncheons, brunches, and large, formal dinner parties where children were enlisted to set the table and take guests’ coats. “I ate a lot of just about every kind of congealed salad imaginable,” she laughs. Though both Carvel and Ginny enjoy a wide range of cuisines, to this day they frequently turn to the worn metal recipe box bulging with cards in the cursive of their predecessors. The tomato aspic was one made by both Carvel’s grandmother and namesake, who died before she was born, as well as her great-grandmother, who she used to visit regularly as a child.

“Sometimes on weekends I would spend the night with her at her apartment on West Paces Ferry Road, and we’d watch The Love Boat and Fantasy Island together, ” Gould remembers. “She would give me some money and send me to the Piggly Wiggly to buy a tenderloin or something, and I would cook dinner for us.”

The aspic recipe has evolved slightly from one generation to the next. Tomato sauce replaced V8; artichoke hearts supplanted olives. “I still like to serve it for luncheons,” says Ginny, a fashion model like her mother. “But it’s also good on a cold buffet, with shrimp and rice, and a broccoli salad. Men tend to think it’s a women’s dish until they taste it; it’s very lemony and Tabasco-y.”

When Carvel serves it, she’ll sometimes skip the cottage cheese in the accompanying sauce and make homemade mayonnaise, using olive oil and freshly laid eggs from the boutique chickens that reside on the property at Canoe. To modernize the table, she’ll include a few elegant classics like cold beef tenderloin and croissants, and more contemporary fare such as watermelon and feta salad, and mint julep cocktails topped with lemon granita.

“I’ve toyed with the idea of trying to update the aspic itself, maybe thickening fresh tomato water and Meyer lemon juice with plain gelatin, and using fresh sunchokes instead of canned artichoke hearts,” Gould says. “But then I think, why bother? It is what it is. Even among people who say they’ve never tried aspic, it’s still the first thing to get eaten.

Instructions
1. In a medium bowl, dissolve Jell-O in boiling water. Add tomato sauce, vinegar, lemon juice, lemon zest, salt, and Tabasco. Stir until well blended. Refrigerate about 45 minutes, or until syrupy but not set. Fold in artichoke hearts; turn into a 1 ½-quart mold (or 6 individual molds). Cover with plastic wrap and refrigerate until set, at least four hours. Half an hour after refrigerating, mix thoroughly so artichokes will be evenly distributed and not floating on the top.

2. Meanwhile, mix the cottage cheese and mayonnaise with onion, green onions, parsley, and salt and pepper to taste. Transfer to a bowl small and refrigerate until ready to use. When aspic is set, remove from refrigerator and run a knife around the edges, then dip the mold briefly into hot water (below the rim) to loosen; unmold onto a lettuce-lined platter. Place sauce in center of the aspic or serve on the side.

This is an extended version of an article that originally appeared in our July 2011 issue.