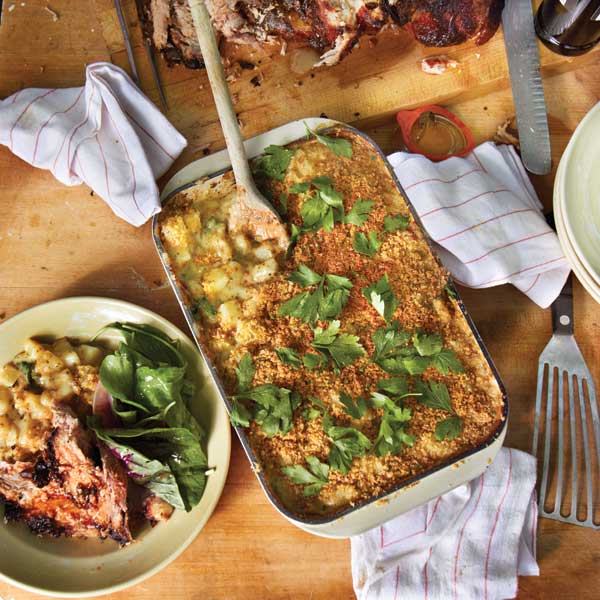 Drew Belline celebrates New Year’s Day like any slightly superstitious Southerner—with family, friends, football, and a feast that includes the requisite black-eyed peas and collards for prosperity. For his contribution to the annual potluck at his parents’ North Fulton farm, he typically smokes a fresh ham rubbed with ground chilies, fennel seed, garlic, and lemon. But the family counts on his mom to bring the other essential component to the meal: Big Daddy Potato Casserole.

“That recipe came from my Dad’s mother in Missouri,” said Belline, who notes the family has called the dish by that name for so long that no one remembers its origin. “We have it for every big get-together. Everybody loves it. It’s the dish that always comes to mind first when I think about my favorite foods growing up.”

Previously chef de cuisine at Floataway Cafe and now a partner with Ford Fry at Decatur’s No. 246, Belline owes his career path to his mother’s enthusiasm for keeping heirloom recipes alive on both sides of the family. “I didn’t do so well in regular college, so I started taking my mom’s recipes and seeing what I could do with them.” He now freely applies the more refined sensibilities he’s learned as a chef to those perennial favorites, and no one objects.

For his version of the Big Daddy Potato Casserole, he replaces the Campbell’s soup in the original recipe with a from-scratch chicken velouté infused with smashed garlic cloves. Crème fraîche subs for sour cream, and artisanal aged cheddar stands in for Velveeta. To brighten the flavor, he folds in fresh chives and parsley, and then tops off the casserole with breadcrumbs made from leftover Holeman and Finch Public House sourdough, toasted with olive oil and garlic.

The value of the ritual is more important to him than preserving the original recipe. “We sat down to a family dinner every night when I was growing up,” he said. “And even though I’m at the restaurant most nights, my wife and I make sure that at least once a week we all sit down at the dinner table together with our two daughters.”

Instructions
1. Place the diced potatoes in a large saucepot. Pour enough cold water over the potatoes to barely cover them. Add the onion, thyme, crushed garlic cloves, 1 to 2 teaspoons salt, and a few grindings of pepper and bring to a gentle simmer; cook until barely tender but still somewhat firm. (Remember, you are going to cook them again.) Strain and cool to room temperature. Remove thyme sprigs.

2. Preheat oven to 350 degrees. While the potatoes are cooking, place butter in a medium-sized saucepot over medium heat. Once melted, whisk in the flour and cook until it begins to give off a nutty aroma, about two minutes. Slowly whisk in hot chicken broth, being careful not to create any lumps in the mixture. Raise heat slightly and continue to whisk until all the chicken broth is incorporated and sauce is thickened and bubbly. Whisk in the cheddar and Parmesan cheeses, and crème fraîche. Fold the cooked potatoes into the mixture, along with the parsley and chives. Season to taste with salt and pepper.

3. Butter a 3-quart casserole dish, or two 1 1/2-quart dishes. Pour potato mixture into the dish, or dishes, and sprinkle with breadcrumbs. Place in preheated oven for 30 to 40 minutes, or until bubbly around the edges. Let cool for 15 minutes before serving. (Sauce will thicken slightly as it stands.)

This is an extended version of an article that originally appeared in our January 2012 issue.