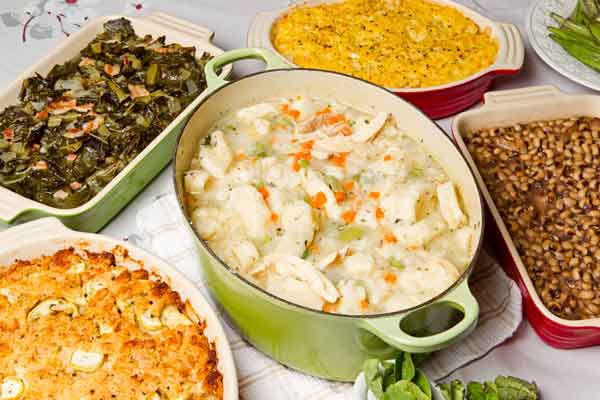 Jason Hill, chef-owner of Wisteria, used to gripe about leaving his Atlanta friends behind to spend weekends at his grandparents’ house in Ellijay—especially in the summertime. That meant endless hours under the broiling sun stringing green beans, picking okra, and gutting trout that he and his cousins had just reeled in from the streams. But never once did he complain about the food. Each morning, his grandfather, Newman West, would rise before everyone else to cook a breakfast of eggs, grits, bacon, country ham, and biscuits with sausage gravy. Typically, he’d make some extra biscuit mix that his wife, Flora Mae—“Nanny,” as Jason called her—would use for chicken and dumplings later in the day. Alongside, there would be field peas, pork-seasoned collards, rich casseroles, fried okra, and sliced tomatoes and green onions plucked from the garden.

The Wests never let a scrap go to waste, even after his grandfather built a successful construction business. “He came from nothing. She came from nothing,” Hill said. “‘Paw Paw’ was never a rich man, but he was very, very giving. He always carried his Bible around with him, and in it was a passage that he’d circled about the importance of sharing and giving away to those less fortunate. Around Christmastime, I’d go around with him to the houses of people he knew were having financial difficulties, and he would hide money under teapots and sugar bowls. He was just that kind of guy.”

Jason was sixteen when his grandfather passed away. His grandmother died a few years later. As her belongings were being dispersed among relatives, he requested her old wooden recipe box. “But when I opened it, all the cards had on them were things like, ‘fried okra, don’t forget the salt,’” he laughs. Yet even with those sketchy instructions, his memories of watching her in the kitchen were sharp enough to inspire many of the dishes he serves today at Wisteria, the Inman Park restaurant he has run for almost a decade. His forebears’ waste-not values and reverence for their Georgia roots come through in popular menu items like the black-eyed pea hummus with sweet potato chips, the iron skillet–fried chicken with bacon-braised collard greens and sweet corn pudding, and the coconut cream pie. Jason also keeps their legacy alive at the family dinner table, by occasionally whipping up one of his grandmother’s specialties, like chicken and dumplings—his four-year-old son Carter’s favorite. Using self-rising flour ensures fluffy, melt-in-your-mouth dumplings.

Instructions
1. In a stockpot or Dutch oven, combine chicken stock, carrot, onions, celery, garlic, and herbs. Bring to a boil; reduce heat to a simmer and cook until vegetables are almost tender. Add cooked chicken and the flour/water paste and continue to simmer.

2. Meanwhile, make the dumplings: In a medium bowl, combine flour, pepper, and butter. Work butter in with your fingers until consistency resembles coarse meal. Make a well in the center; add egg and buttermilk to the well; stir in flour until it begins to clump, adding a little more buttermilk if needed. Turn out onto a lightly floured surface; knead 5 or 6 times until dough holds together and roll into a log about 1 ½ inches in diameter. Slice into discs about 1/4- to 1/2-inch thick.

3. Raise the heat slightly to bring the chicken stew to a more vigorous simmer, then add dumplings, cover, and cook about 5 minutes. Uncover and simmer 5 minutes longer, until dumplings are cooked through.

This is an extended version of an article that originally appeared in our June 2011 issue.