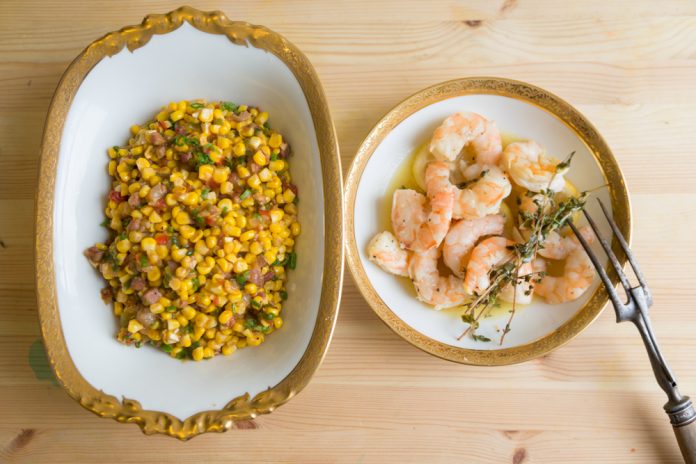 Joe Truex, the executive chef at Watershed on Peachtree, hails from Mansura, Louisiana—the heart of food-obsessed, French-speaking Cajun country. The youngest of seven kids (and the only son) in a Catholic family, Truex was weaned on crawfish bisque, coush-coush (leftover cornbread with milk and sugar), and gumbo served alongside a baked sweet potato. This time of year, he gets cravings for his mother’s maque choux—a Native American dish of fresh corn, bell pepper, and tomatoes that appears regularly on Cajun tables. He intensifies its corn flavor with a trick he learned from a former coworker’s Vietnamese grandmother: steeping the silks to make an aromatic “tea” that he adds to the mixture while it cooks. To make it a meal, he sautes fresh shrimp in butter, herbs, and lots of garlic. “One thing I don’t do is season with those Cajun spice blends,” he says. “It muddles the palate. I prefer fresh herbs, salt, and pepper.”

Instructions
For the maque choux:
1. With a sharp knife, slice the kernels off the cob and set aside, and reserve one of the cobs.

2. Make the corn-silk tea by breaking one reserved cob in half and adding it to a small saucepan with the silks, 1 1/2 cups water, and 1 teaspoon of salt. Bring to a boil, turn off heat, and let steep.

3. Meanwhile, in a large skillet, melt butter over medium heat. Add tasso or andouille and saute until meat renders fat. Add onion, bell pepper, and garlic and saute until tender. Add tomatoes and corn kernels; cover and cook for a few minutes until corn is tender.

4. Uncover and drain silks from the steeped tea and add a little of the tea to the mixture. Add corn-flour paste; cook and stir until thickened slightly. Stir in basil.

For the shrimp:
1. Place shrimp in a medium skillet with butter, garlic, herbs, sliced lemon, 1 teaspoon of salt, and a few grindings of pepper.

2. Add a splash of wine or beer and cook over high heat, stirring, until shrimp is pink and most of liquid has evaporated.

3. Season with hot sauce to taste. Serve alongside the maque choux, with crusty French bread if desired.