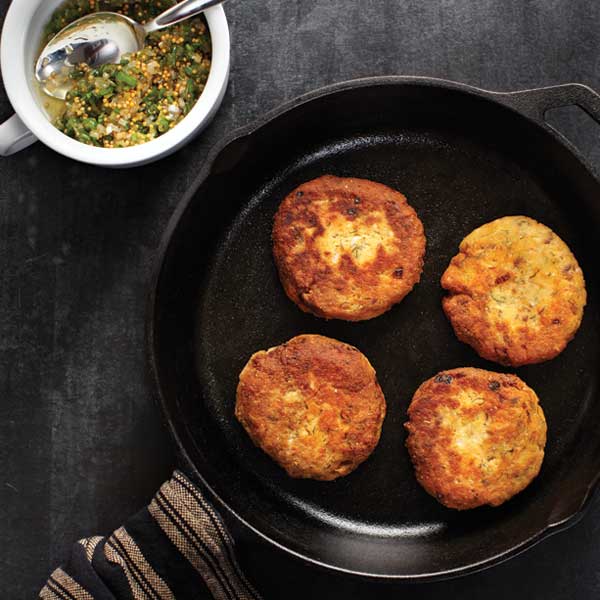 Justin Burdett, chef de cuisine at Miller Union, was rarely exposed to fresh seafood until he began cooking in high-end restaurants in Athens, Asheville, and Atlanta. But he’s eaten plenty of salmon cakes made from canned fish throughout his lifetime, and to this day it’s still how he prefers to get his omega-3s.

“My grandmothers lived close to each other, just a few trailers apart, and they both made them all the time,” says Burdett. “They were supersimple and really cheap.” His eighty-three-year-old maternal grandmother, whom he calls “Nanny,” still prepares them for frequent Sunday family get-togethers, along with her signature deviled eggs.

Cooking in his parents’ modern suburban kitchen a few miles from his childhood home in Snellville—where he now lives with his wife and two-year-old daughter—Burdett challenged himself to create a fresher version of salmon cakes, sans the can. He first made a quick potted salmon, adding chunks of wild-caught fish to a mason jar along with white wine, butter, and herbs. Once he boiled those ingredients, he mashed the mixture together in a bowl with eggs and cornmeal as his grandmother does, formed them into patties, and fried them in a cast-iron skillet until crispy and brown.

For a seasonal flourish, he topped the cakes with a tangy-sweet Vidalia onion relish. “My Nanny wouldn’t do that. She would probably just serve them with some sliced fresh tomatoes on the side. I don’t know how she does it, but she always manages to find really good tomatoes, even when they’re out of season.”

Instructions
1. Cut salmon into 1-inch cubes; season with salt and pepper and place in mason jar. Add butter, wine, dill, and 1 tablespoon of the finely chopped Vidalia. Place lid on the jar and make sure it is sealed tight. Shake the jar several times to redistribute ingredients. Set jar upright in a large pot of water to cover about three-quarters of the jar. Bring heat to a bare simmer and maintain for 20 minutes. Every 5 minutes, grasp the lid of the jar and give it a few shakes.

2. Meanwhile, prepare relish: In a small saucepan combine all ingredients except sliced green Vidalia stems; bring to a boil. Reduce heat to medium-high; cook and stir until syrupy, for 4 or 5 minutes. Transfer to a heatproof bowl and refrigerate for about 5 minutes to cool. Add reserved sliced Vidalia stems; season to taste with more salt if desired.

3. When the salmon has cooked for 20 minutes, remove from heat and let rest on the counter with the lid on for 5 to 10 minutes, until the jar is cool enough to handle. Carefully remove lid. With a slotted spoon, remove salmon, onion and dill from the liquid in the jar and place it into a medium-sized bowl. Add a pinch of salt and pepper, eggs, and cornmeal. Mix ingredients together by hand and form 4 to 6 even-sized patties. In a large cast-iron skillet or nonstick pan, heat olive oil over medium heat. Add patties and cook until golden-brown, about 3 or 4 minutes per side. Remove from pan and drain on paper towels. Top each patty with a spoonful of relish.

This is an extended version of an article from our May 2012 issue.