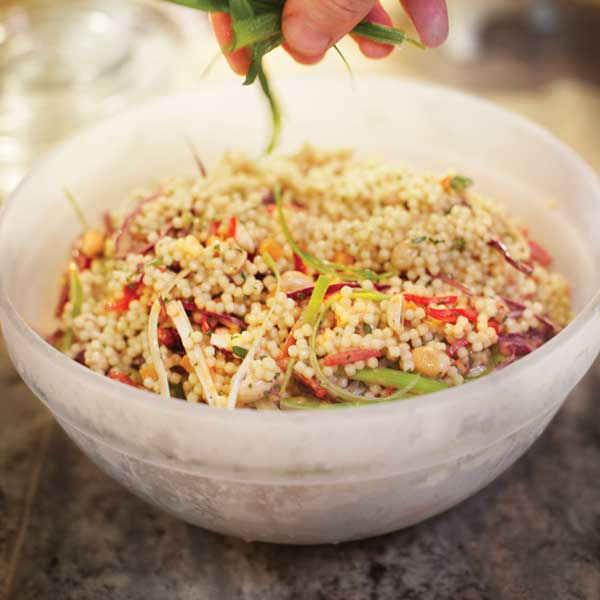 Kevin Ouzts grew up in Marietta with a ten-foot-square brick pit smoker in his backyard, where his Georgia-bred father, Doug, slathered many a rib rack with a family barbecue sauce that included molasses. (Ouzts isn’t about to divulge the recipe, but look for his bacon-infused version soon in bottles on the Spotted Trotter’s shelves.) His mother, Jeannie, prepared the sides and desserts. A New Jersey native, she followed her own rules in the kitchen—a trait she passed on to her son. “She was always giving big, lavish dinner parties and experimenting with new stuff,” Ouzts says. “For barbecues she came up with imaginative grain and pasta salads besides the usual potato salads and slaws.” When Ouzts and his wife and business partner, Megan, find time to entertain at their Kirkwood bungalow, he’ll often use one of his mother’s basic formulas as a starting point for his own creation. One of her dishes he especially liked combines red cabbage and orzo, the rice-shaped pasta, along with peanuts and an exotically spiced dressing.

“Pasta salads can get monotonous, but you can have fun with them, by varying the dressings, and the ways you cut the vegetables,” he says. Since Ouzts feels that orzo “can get a little gummy,” he substitutes acini di pepe, the peppercorn-shaped pasta similar to Israeli couscous that is used in Italian wedding soup. The salad’s pungent dressing has Asian undertones reminiscent of Thai satay, though Ouzts gives it Southern cred with a hefty dose of easy-to-make sorghum gastrique (a vinegar and sugar reduction). This vibrant salad pairs with just about anything that comes off a grill.

Instructions
1. Make the slaw: In a large bowl, combine salad ingredients. Toss the salad with enough of the dressing to moisten; serve immediately. Makes 6 to 8 servings.

2. To make sorghum gastrique, bring up sorghum and vinegar to a boil in a small saucepan; turn down heat to a simmer and reduce by half. Let cool; cover and store until ready to use. In a blender or food processor, combine the gastrique with the rest of the dressing ingredients and process until smooth.

This is an extended version of an article that originally appeared in our July 2012 issue.