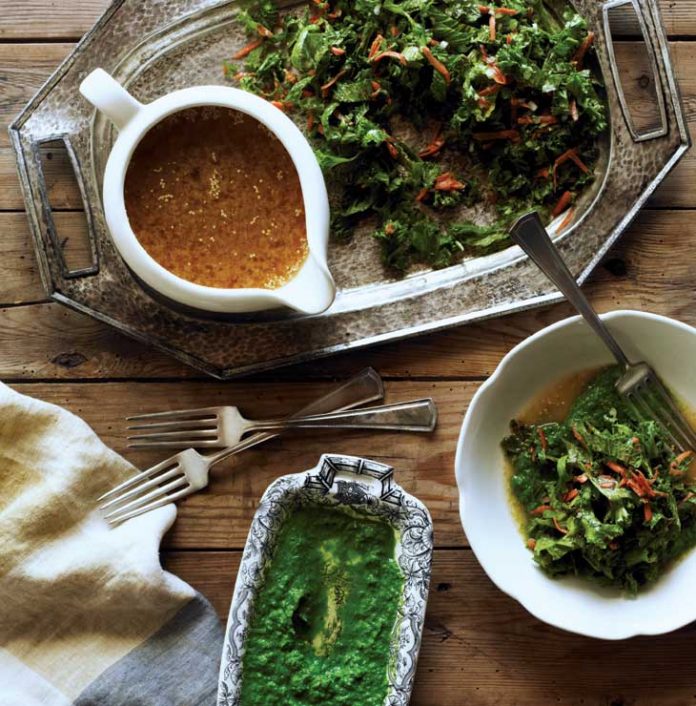 Linton Hopkins is a proselytizer of Southern produce. He details differences in heirloom varieties to customers in his restaurants, dotes over the stands at the Peachtree Road Farmers Market (he and his wife, Gina, were part of its founding group), and ships the seasonal bounty for fundraiser feasts around the country. But he wasn’t always such a vegetable fan. As a boy, he was more inclined to push aside the collards and squash to save room for an extra helping of barbecue or macaroni and cheese. “I didn’t even like tomatoes,” he says. He always had a fondness for the potlikker from turnip greens, though. With an Atlanta lineage that goes back at least five generations, Hopkins and his relatives would meet up at Mary Mac’s, mostly after church services at St. Luke’s Episcopal, where he was an acolyte. His dad would drink the signature potlikker straight from the bowl. “I preferred it as a dipping sauce for the cornbread muffins,” Hopkins says. “My true love of greens really didn’t take off until I moved to New Orleans and was introduced to gumbo z’herbes. It’s a soup that’s basically like a potlikker thickened with a little roux.”

By the time he returned to Atlanta in 2002 to begin plans for Restaurant Eugene, which opened in 2004, he was a convert. “We grow greens better here than anywhere else,” he says. To prove his point, he gathers a panoply of them into one dazzling dish. Hopkins created a centerpiece with seven different elements; we simplified it to three components for home cooks.

Turnip Green Puree:
A Vitamix or similar high-performance blender is essential to achieve the emerald color and velvety consistency of Hopkins’s version. If you use a food processor or regular blender, you’ll still get the refreshingly tart taste, but with flecks of green rather than a uniform color.
1 bunch turnip greens
1 cup buttermilk
Salt
1/2 lemon

Instructions
1. Make the collards: Clean, de-stem, and cut collard greens into wide strips. In a large, heavy pot, add sorghum and vinegar and bring to a low boil. Add fatback (or bacon) and onion and cook, stirring, for 2 to 3 minutes. Add greens, chicken stock, and cayenne pepper. Season to taste with salt and pepper. Toss thoroughly and simmer gently for 30 to 45 minutes, stirring occasionally, until very tender. Before serving, drain the potlikker from the collards and whisk in the whole-grain mustard. (Reheat the potlikker on medium-low heat before serving, if necessary.)

2. Make the slaw: Wash, de-stem, and slice mustard greens into very thin strips (as if for cabbage slaw). Shred carrot with medium-sized holes of a box grater. Stem and mince the parsley. Place greens, carrots, and parsley in a large bowl and set aside.

3. In a small bowl, whisk together the jam, vinegar, and mustard. Whisk in the oil and caraway seed; season to taste with salt and pepper. Add dressing to mustard greens a little at a time, tossing after each addition. Do not overdress the greens; as it sits it will macerate and break down the greens slightly. Depending on the amount of greens used and their degree of heat and/or bitterness, you may need to adjust with a little more vinegar and salt to bring flavors into balance. Fold in green onions just before serving.

4. Make the puree: De-stem and wash the greens, and chop into large pieces. Fill large bowl with ice; set aside. Bring a large pot of salted water to a boil. Place greens in water and cook for 30 seconds. Remove greens from water and place in ice bath to stop cooking and set color. Once cool, drain and squeeze out as much liquid as possible from the greens. Place in blender and blend until very smooth. Place in a large bowl and whisk in buttermilk. Adjust seasoning with salt and a few drops of lemon juice.

5. To plate: Spoon turnip puree onto the bottom of 4 to 6 dishes. On top of the puree, arrange small piles of the collards and mustard green slaw. Drizzle with warm potlikker.

This recipe originally appeared in our November 2012 issue.