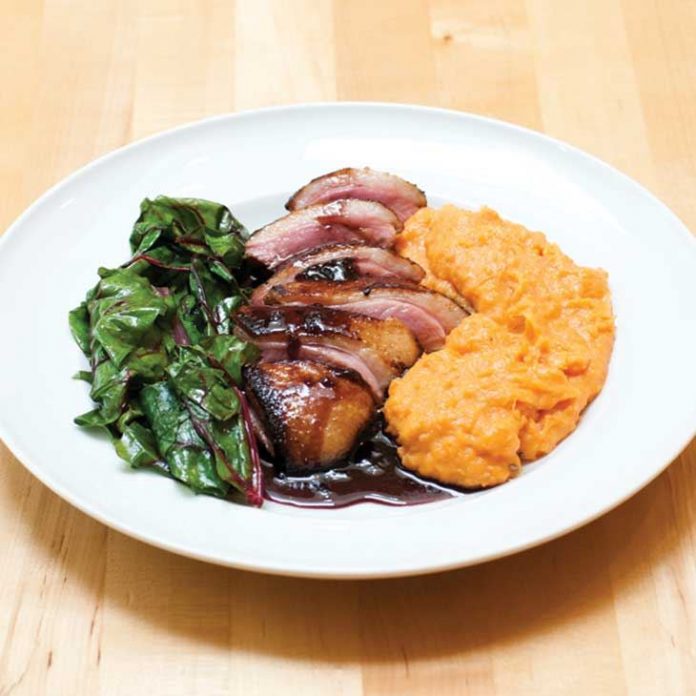 Molly Gunn, co-owner of the Porter Beer Bar, usually works the dining room of her Little Five Points gastropub while her husband and business partner, Nick Rutherford, presides over the kitchen. At Christmastime, though, Gunn dons an apron as her family gathers at their mom’s Oak Grove home to celebrate. Gunn’s mother hails from Michigan and her father grew up in Washington, D.C. They lived in multiple states and abroad before settling in Atlanta, where Gunn was born and raised. Her knowledge of Southern fare came mostly from outings to Deacon Burton’s long-gone fried chicken temple and Quinnie’s, a defunct soul food cafe in Vista Grove Shopping Center. A trip to Italy as a teenager started her dreaming about opening a restaurant rooted in classic European techniques, leading her to jobs at Babette’s Cafe, Seeger’s, and Bacchanalia.

Her older sister Heather, an ER doctor and cooking enthusiast, stoked that ambition by inviting her to join in kitchen projects, especially during the holidays.

Childhood gingerbread houses gave way to more sophisticated fare as they grew older. One more recently added holiday staple is duck in a cherry-port sauce. “Cherries are the big fruit in Michigan where my mom is from, and it’s a taste I’ve grown up with,” says Gunn. Sweet potatoes, whipped with lots of butter and local honey, pair beautifully with duck breast while paying homage to her Southern upbringing. While the meat sizzles, the sisters saute torn leaves of chard with smashed garlic cloves in a little olive oil.

A hearty red wine would be the logical accompaniment, but Gunn has other, unsurprising opinions about beverage pairings. “A malty SweetWater Festive Ale would go really well with this meal—and it’s local!”

Instructions
1. In a medium bowl, whisk soy sauce and sherry. Using a sharp knife, make diagonal cuts at 1/2-inch intervals in duck skin (but not through meat). Place duck, skin side up, in glass baking dish. Pour marinade over. Cover and refrigerate 2 to 6 hours.

2. In a heavy, medium-size saucepan over high heat, bring broth, port, 1 cup cherry juice, cherries, and thyme to a boil. Reduce heat; simmer until reduced to 1/2 cup, about 15 to 20 minutes. Meanwhile in a small saucepan, boil remaining cup of cherry juice with 1 tablespoon sugar until syrupy. Combine with other mixture.

3. Remove duck breasts from marinade and place skin side down in a heavy, large skillet over medium heat. Cook until skin becomes crisp, 5 to 10 minutes. Turn duck over; cook about 5 minutes longer, or until duck is cooked through but still pink. Transfer duck to work surface; slice thinly on the diagonal. Add cornstarch mixture to port-cherry mixture. Simmer, whisking constantly, adding butter one piece at a time and whisking until melted before adding next piece. Season with salt and pepper. Spoon a pool of the sauce on each plate and fan out duck slices on top.

This is an extended version of an article that originally appeared in our December 2012 issue.

You could spend three days roasting a duck. Or you could go to Atlanta Chinatown mall. 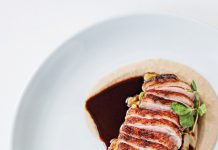 Cooking duck breast is tricky. Noble Fin’s Jeb Aldrich shares how to get it perfect every time.