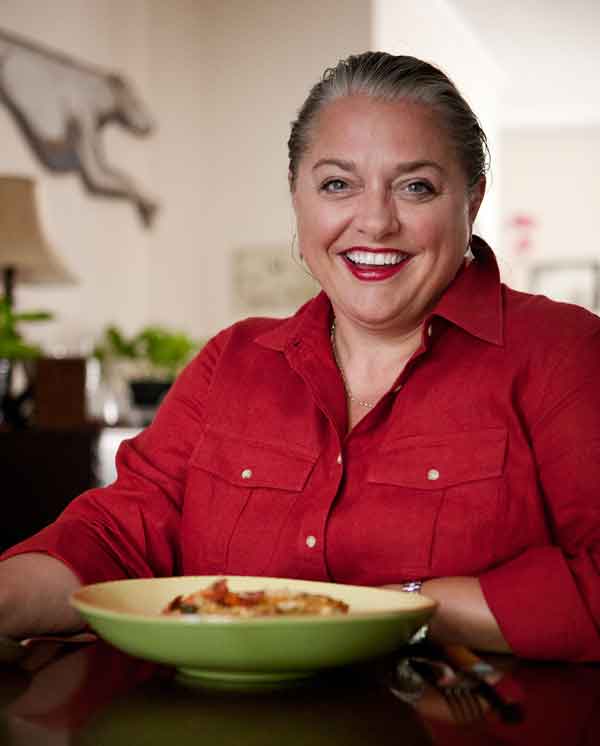 With Georgia ancestry that dates back to the 1700s, cookbook author and culinary entrepreneur Virginia Willis credits her predecessors with teaching her the proper way to bake a peach cobbler and simmer a pot of Brunswick stew.

The Cajun-Creole-influenced recipes that also turn up in her cookbooks were inspired by another chapter of her life. When she was three years old, she moved with her family to Alexandria, Louisiana, where she would spend her elementary school years until they returned to Augusta. “My mother loves, loves, loves to cook, and always has. She totally immersed herself in the food culture there, and learned to cook red beans and rice, jambalaya, gumbo, and etouffee from the spiral-bound Junior League cookbooks she collected,” said Willis.

She and her best friend would spend hours playing in the bayou behind her house, where they would often catch crawfish with nets, using chicken necks for bait. “Then afterward we would have crawfish boils with family friends who had names like Thibideaux and Herbert— pronounced A-bear. Sometimes my father would go frog gigging and we’d have fried frog legs for supper.” She remembers once digging into a bowl of gumbo served by a neighbor, only to notice the head of a squirrel— with its “long squirrel teeth” still intact—bobbing in the pot from which it was served. Far from scarring her for life, that memory has only heightened her affection for gumbo or its kitchen-sink cousin, jambalaya.

In her just-released cookbook, Basic To Brilliant, Y’all: 150 Refined Southern Recipes and Ways To Dress them Up for Company (Ten Speed Press, $35), Willis features a simple jambalaya with shrimp and sausage—sans rodents. “It’s authentic Cajun food that makes an easy, affordable, casual dinner for a busy weeknight,” she said, while assembling the dish in her Vinings condo kitchen. To make it even easier and more affordable, she said, you can substitute chicken thighs for part of the shrimp, and leave the shrimp unpeeled, which also helps keep them from drying out. As she does with all the recipes in her new book, she adds a “brilliant” twist to the classic dish by seasoning it with fried pork cracklings ground to a powder— a trick she learned from her friend Sandra Gutierrez, whose debut cookbook, The New Southern-Latino Table (UNC Press, $30) was also just released. “Pork and shrimp go so well together, and I love cracklin’s. They remind me of road trips when I was a child. Cracklin’s and Coca-cola was my favorite snack.”

Instructions
1. Make the Homemade Creole Seasoning: Many of the store-bought Creole seasonings are mostly salt, sometimes with added chemical preservatives and anticaking agents. This simple seasoning blend is a mixture of salt, pepper, and dried herbs and spices. And how’s this for anticaking: shake the jar. Combine the cayenne, salt, white pepper, thyme, black pepper, sage, onion powder, and garlic powder in a small airtight container or mason jar. Stir to combine. Store in a cool, dry place for up to 3 months. Makes about 1 cup.

2. Heat the oven to 350 degrees. In a large ovenproof skillet, heat the oil over medium-high heat until shimmering. Add the chicken thighs, skin side down. Cook until browned on both sides, 3 to 5 minutes. Remove to a plate. Pour off any of the rendered fat in the skillet and discard. Add the andouille and cook until the meat starts to brown and render fat, about 3 minutes. Sprinkle the seasoning over the meat. Add the onion, celery, and poblano pepper; cook, stirring occasionally, until the vegetables start to color, 5 to 7 minutes. Add the garlic and cook until fragrant, 45 to 60 seconds. Add the rice and stir to coat. Stir in the tomato sauce and stock and bring to a boil. Return the seared chicken thighs to the skillet and nestle them, without crowding, into the rice.

3. Transfer to the oven and bake, uncovered, for 25 minutes. Add the shrimp and stir to combine. Continue baking until the rice is tender and the shrimp are opaque, about 15 minutes more. Remove from the oven to a rack to cool slightly. Season with salt, pepper, and Cracklin’ Powder to taste.

4. Make the Cracklin’ Powder: Empty the (1.75-ounce) bag of fried pork skins into a food processor fitted with a metal blade. Pulse until finely ground to a powder. Sprinkle over the jambalaya and serve immediately.

This is an extended version of an article that appeared in our October 2011 issue.