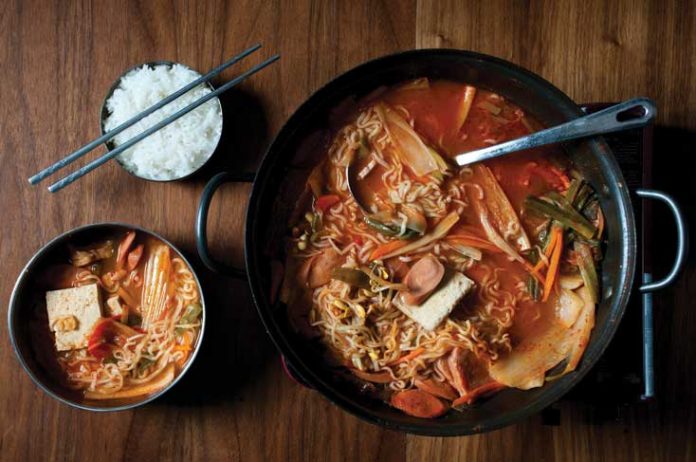 Korean barbecue restaurants—where meals revolve around ribbons of meat sizzling on individual tabletop grills—may well be the Japanese steakhouses of the new millennium. In the 1960s and 1970s, Benihana and its brethren seduced diners with Westernized teppanyaki—nubs of beef, chicken, or seafood and tangles of sprouts flung around countertop hibachi griddles by knife-juggling cooks. Minimalist sauces spiked with soy sauce, vinegar, and ginger prepped our palates for more faithful expressions of Japanese cuisine that eventually became American obsessions, like sushi and, more recently, true-minded ramen.

Korean cooking needs a similar conduit. Pundits have been predicting its ascent for decades. Ruth Reichl, ex–editor in chief of defunct Gourmet magazine (which I still miss), pronounced that sweet, salty, kimchi-peppered “Seoul food” would be the next crossover hit in 1997, when she was restaurant critic at the New York Times.

It’s only now really catching on, mostly through unintimidating gateway dishes. The Kogi BBQ food trucks in Los Angeles, for example, launched in 2008 and serve kimchi quesadillas and tacos filled with short rib and dressed with cabbage and pickled cucumbers. Those creations are now imitated across the country (you can find serviceable renditions in Atlanta at the Westside’s Hankook Taqueria).

I wager that the cuisine won’t reach mainstream adoration until a savvy entrepreneur figures out how to package the Korean barbecue house experience for the meat-greedy masses. Don’t wait for a dumbed-down interpretation, though: Korean barbecue culture already flourishes among the Asian populations in Duluth and along Buford Highway.

Chosun Ok in Doraville is a destination for the basics. Order kalbi (sliced short ribs steeped in a marinade that includes garlic, sesame oil, soy sauce, and sugar) and bulgogi (slivers of boneless ribeye tossed in similar flavorings), which servers cook at the table over a built-in grill powered by charcoal. As at every Korean restaurant, the meal is punctuated by banchan—side dishes that may include kimchi, pickled sprouts or chile peppers or daikon (a crunchy radish), and potato salad. Han Il Kwan down the street offers similar excellence with more family-friendly service than Chosun Ok.

Venture to Duluth for restaurants that specialize in a variation called “samgyeopsal,” or pork belly. Honey Pig, which opened in 2007, may be the most widely known Korean restaurant in the metro area, with its accessible atmosphere accented with stone, lacquered woods, and cushy tan chairs. Bacony slabs sputter on a domed griddle, and then servers stir-fry rice and vegetables along with any leftover meaty bits for a splendidly greasy finale. Iron Age launched two years later, sporting a military theme with staffers decked out in dark uniforms, though I prefer the quality of meats at Honey Pig.

678, the latest entrant in the field, set up shop last spring. It fuses styles by featuring pork and beef equally, and it weaves in some fresh flourishes. Its long, rectangular building sits next door to a Waffle House—a quintessential East-West panorama in the area surrounding Gwinnett Place Mall. 678’s interior is fetchingly spare: cathedral ceilings lined with dark-stained woods, concrete floors, enormous vent hoods over each booth to suck up the smoke. Visual splash comes courtesy of giant wall-mounted screens, predictably replaying Psy’s video sensation “Gangnam Style” (with 834,481,172 views on YouTube as of this writing) throughout the evening.

And the husky dude with the mugging expressions showcased in life-sized cutouts? That’s Kang Ho-dong, a Korean pop culture fixture who’s a cross between Ed Sullivan, Hulk Hogan, and Adam Sandler. A former wrestler and comedian, he now hosts the variety program Star King and is a partner in this growing chain of barbecue restaurants, with locations across South Korea and also in Hawaii and Los Angeles. (The restaurant’s name isn’t a riff on the Atlanta area code; its digits add up to twenty-one, a lucky number in Korea.)

Ho-dong flashes you a double thumbs-up as a server grabs laminated menus and directs you to a table. The menu offers eight versions of pork, priced from $14.99 to $21.99 for generous single servings, and nine choices of beef that range from $18.99 to $24.99. Crowds might go for massive combo platters that cost up to nearly $120. And an all-you-can-eat option for multiple pork dishes comes in two ranges, $25.99 or $29.99 per person, but you have to possess the voraciousness of a python to swallow all that meat. I speak from experience.

Start with the pork belly and either the sliced ribeye, satisfyingly straightforward, or the sirloin steak for the contrast of its marinade. (Other noteworthy selections include pork belly doused in chile paste, boneless short rib, stringy but intriguing pork neck meat, and pork butt “seared” on a slotted grill cover rather than directly over the flame.) After you order, a busboy carts out a smoldering bucket of charcoal. Another staffer will fiddle with a dial under the table: Yes, these grills have gas burners to augment the heat when the coals start to flicker. Deceptive, but also practical.

Other waitstaff emerge from the kitchen with sides and condiments, including banchan like vinegary blanched broccoli, paper-thin slices of pink beets, and, of course, kimchi. They aren’t the most precisely seasoned banchan I’ve had, but I eat them gratefully to offset the unctuous proteins. A segmented metal ring is set over the tabletop pit, and one section is filled with beaten egg that resembles the mixture a line cook uses to make omelets at a brunch buffet. It sets slowly; scoop it into a small bowl to savor before it browns on the bottom.

Here come the headliners: Strips of pork belly hit the mesh metal net laid atop the grill, the meat’s striated reds and whites as bright as candy canes. It crackles and undulates over the flame, and servers remain vigilant, turning the pieces with tongs and then snipping them into morsels when they’re ready. Eat them plain, dip them in a concoction of soy sauce and sweet wine revved with garlic and jalapeños, or swipe them through mildly funky fermented bean paste. You can wrap them in lettuce leaves or drape them over a makeshift salad of romaine and scallion shards dressed in a chile-laced vinaigrette. After a few minutes, any remaining tidbits get pushed to the edge of the grill and on goes the next round.

You take this meal at your own pace. Families with young children may power through their dinner in forty minutes, while a gathering of older men can sit for hours, sipping beer or sakelike soju. Even before you reach the car you realize your clothes reek of meat and smoke and grease. It’s so worth it.  —Bill Addison

Photograph by Caroline C. Kilgore. This review originally appeared in our January 2013 issue.