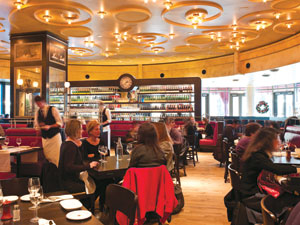 Stepping into the blast of noise and spectacle generated by a new Buckhead Life Restaurant Group extravaganza always reminds me of that moment when Rick Moranis unwittingly opens the door to another universe in Ghostbusters. The brilliant light causes me to squint. I imagine my hair mussed from the rush of energy.

Bistro Niko, the group’s French-inspired brasserie, is the first local venture from the company since it launched Kyma, its upscale Greek restaurant, in 2001. And the tony mob at Bistro Niko looks ecstatic—relieved, even—to have a new hot spot in which to bask once again. There’s little talk of which businesses folded this week or exactly how many more months or years it’ll take the economy to fully recover. Instead, there’s flirting and sparkling cocktails and loud laughter.

The space, inside the lavish Sovereign building, inspires joie de vivre. A short hallway frames the glassed-in kitchen, luminous with its white tiles, and leads into the rollicking open room filled with low-slung booths and lined with banquettes. A butterscotch glow filters down from the patterned ceiling. Servers and managers in black suits wind through the maze of furniture as if they’ve worked the floor for years. Hostesses may tell you that your reserved table has yet to be vacated and direct you to the bar. This could be the only place in town where you must elbow your way through huddled, fur-clad bodies to request a vodka and tonic. An older crowd frequents the bar without much thought toward eating, though an even more mature bunch seems to have the inside track on a quieter salon dining area off the main room.

But after the swirl of exhilaration, when you finally sit, the meal deflates some of the thrill. Much of the menu—a sprawling list of Gallic greatest hits—lacks a true sense of tradition. Executive chef Gary Donlick, an accomplished cook who spent years at the group’s now-closed Pano’s & Paul’s, is out of his métier: He’s a better fit for that restaurant’s forthcoming reinvention, Pano’s. Bistro Niko’s kitchen doesn’t really speak French with its food; it stammers guidebook phrases.

As a result, eating here often feels like a Vegas approximation of a French restaurant. Take, as one example, the raclette, a dish in which strong cheese is broiled and poured over potatoes, with pickles on the side to cut the richness. Niko’s version arrives at the table resembling queso fundido. A blob of melted cheese sits in a crock, scattered with some lovely pickled enoki mushrooms, but with slices of limp baguette on the plate. Sure, melted cheese tastes great, but this is a bastardization of a relatively simple preparation so glorious in its original form. Why dumb it down? I have similar questions about the spiral pasta that appears incongruously in boeuf bourguignon, and roast chicken whose skin isn’t crispy and fragrant, and a baba au rhum for dessert that’s missing even a whiff of booze.

Bistro Niko’s culinary approach feels like a step backward for Buckhead Life. After years of opening restaurants with flashy concepts (Southwestern Nava, fusion Bluepointe), the cuisine at Kyma introduced an authenticity—attributable to owner I. Pano Karatassos’s Greek heritage and the culinary skill of his son, executive chef Pano I. Karatassos—that those other restaurants needed. I’d hoped the company was entering a new era that honored the essence of the cuisines it tackled. The times demand it. In the decade-plus since the company opened restaurants regularly, Atlanta’s dining habits have been shifting toward a more rooted style of cooking, whether the restaurant is Southern or Italian or Japanese. For all the French verbiage used liberally on Niko’s menu, many of the dishes taste as if a corporate American committee designed them.

All that said, it’s certainly possible to pull together an enjoyable meal. When gougères emerge from the kitchen hot, which they sometimes do and sometimes don’t, they kick things off memorably. Mussels may be ubiquitous, but the kitchen steams them with finesse in cream, white wine, and shallots and makes them seem like a treat again. Frisée salad holds the right balance of brash bacon lardons and delicate poached egg in its frilly leaves. “Hachis parmentier de veau” is a mouthful of a moniker for shepherd’s pie given a gourmet makeover: Veal osso bucco forms the saucy base, earthy celery root melds with potato in the creamy pureed topping, and a thin sheen of browned fontina on top adds a bit of texture and a welcome salty nip.

I like the chicken liver mousse terrine, though I wonder why the restaurant insists on calling it “faux gras.” Look around: So many places in Atlanta offer chicken livers now. We’re no longer petrified of offal, so go ahead and label it what it is. And the name also makes me want to just order foie gras, which the restaurant offers in a charming rustic terrine with brawny morsels of ham hock, accompanied by brioche toast and apple compote. Pork rillettes, another meaty hors d’oeuvre, have a smooth, spreadable consistency. Avoid the salmon rillettes, in which butter enriches smoked and fresh salmon. This variation can be done beautifully, but it must be served at room temperature. Niko serves it cold, and you end up with globs of congealed butterfat.

Skate wing in brown butter with capers draws an immediate comparison to FAB Downtown and its predecessor, the late and still-lamented Brasserie Le Coze in Lenox Square. Here, the skate wing is cut too thick, and without the burnished sear on the outside that FAB does so well, the skate turns mushy in the middle. If you’re craving fish, go for the smoked trout fillet instead. And if you’re craving steak, head to sister restaurant Chops down the street. The entrecôte frites—a mealy rib-eye with lackluster fries—was among Bistro Niko’s most disappointing entrees. A slice of citrus tart, the best dessert, always buoyed me after such letdowns.

A great brasserie meal ideally makes the diner feel effervescent. And while it is heartening to wade into Bistro Niko’s action-packed scene after some calmer years for the Buckhead Life Restaurant Group, this blockbuster still needs more editing to reveal its potential brilliance. —Bill Addison

Photograph by Deborah Whitlaw Llewellyn. This review originally appeared in our February 2010 issue.