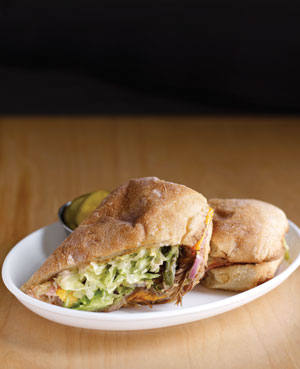 Watching Atlanta’s Westside develop has been the urban equivalent of witnessing a new mountain range emerge in fast-forward: So much fresh geography, so many uncharted nooks. What is currently the area’s most fertile corridor of businesses—between the junction of Northside Drive and Marietta Street and the intersection of Howell Mill Road and Fourteenth Street—felt forsaken just five years ago. Now you can stop for Thai curry at Spoon, pick up cupcakes in a dozen flavors at Caryn’s Cakes, grab panini at Toscano & Sons Italian Market, and disappear into the clump of businesses dubbed the “Beer-muda Triangle”: 5 Seasons Brewing Company, retailer Hop City, and Octane, which serves Belgian ales and microbrews alongside coffee. This stretch also claims its share of destination restaurants—Bacchanalia, Abattoir, and the just-opened Miller Union among them.

But Bocado, which launched in October, may be the Westside’s first true neighborhood restaurant, bearing all the strengths and imperfections that label implies. It straddles the edge between affordable and occasion dining, and its solidly American menu, heavy on seasonal small plates, offers some smart dishes that appeal equally for a quick weekday lunch or dinner or a lingering weekend meal. Bocado also has some weak points (particularly its beverage program) that, due to its undeniable charms, can often be overlooked.

The digs certainly reflect the neighborhood. Design firm AI3—which also fashioned the interiors of Flip Burger Boutique, Holeman and Finch Public House, and 4th & Swift—distilled the essence of the Westside’s industrial-frontier aesthetic in the minimalist dining room. No mustard and burgundy bistro-cozy paint job here: A refreshing, mossy green climbs the walls instead. It eschews lofty dimness in favor of windowed brightness that conveys a breathe-easy sense of space.

Such a surplus of space, in fact, that the proprietors set up a rectangular black table in the center of the dining room as a service station for silverware and napkins. Odd, that table—it’s the one fine-dining conceit in an otherwise casual atmosphere, and it speaks to the background of Bocado’s principals. Owner Brian Lewis comes from a family of restaurateurs, and his last venture was an upscale spot in Birmingham called Table that focused on local and sustainable foods. Executive chef Todd Ginsberg most recently ran the kitchen at the now-closed Trois, and his resume includes stints at the Dining Room at the Ritz-Carlton, Buckhead; Joël; and Asher in Roswell (called the “Bacchanalia of the burbs” during its run in the early 2000s).

Ginsberg’s determination to redirect his high-end past into a neighborhood-friendly present adds a unique moxie to his cooking at Bocado. The menu is low-key with a vengeance: sandwiches at lunch and a lengthy list of small plates with only a few entrees at dinner.

The formula resonates with the locals. A steady lunch crowd is never easy to cultivate in Atlanta, but the “Mexican” is an instant noontime favorite, a construction of roasted pork, ham, avocado, cheese, lettuce, red onion, and chiles that gushes into rich and mellow mouthfuls. It’s not the only caloric pleaser: Buttery toasted bread enfolds roasted poblano peppers, pimento cheese, bacon, and fried green tomatoes and holds its texture for a satisfying crunch. For simpler tastes, a grilled ham and cheese with Dijon mustard sauce, threads of caramelized onions, and thin apple slices is quintessential winter comfort, particularly alongside a cup of Ginsberg’s soothing tomato bisque.

Bocado’s burger has drawn comparisons to the cult burger at Holeman and Finch: Both go the thinner-double-patty route with homemade pickles and American cheese, and they’re even mounted on the same bun (from wholesale H&F Bread Co., owned by the Holeman folks). To my palate, the Holeman burger triumphs—but then, unlike Holeman’s quirky late-night-and-Sunday-brunch availability, Bocado’s two-fister can be snapped up easily at lunch or dinner.

Vegetarians don’t get shortchanged, either: A sandwich with Asian overtones includes roasted cauliflower, layers of Chinese and Thai eggplant, cilantro, and spicy mayonnaise. A jolt of vinegar from pickled vegetables ties the flavors together. And as it turns out, a playful approach to acidity is a Ginsberg trademark on this menu. We christened it the “zing factor” at one dinner. A dual nip from balsamic and olives in a beet salad with arugula and valbreso cheese: Zing! Lemon and capers among Chesapeake flounder with Swiss chard and fingerling potato salad acted as a cartoon bubble floating over the dish and yowling, “Pow!” Ditto for the same lemon and capers tossed among roasted Brussels sprouts with Parmesan.

If only the drink list delivered a similar bang. When I asked a server one night which of the cocktails he thought might be the least sweet, he gave an embarrassed smile and said, “They’re all pretty sweet.” He’s right. And surely the wine selection will grow as the restaurant settles into a rhythm. Currently it has six whites and six reds available by the glass and bottle, and the options are neither inspired nor particularly well suited to the food. It’s a double shame, since the bar—outfitted with stacked metal tubing that improbably evokes the effervescent motion of champagne bubbles—would be an ideal spot to sip interesting vino while savoring Ginsberg’s warming oyster stew.

Given the wide-open possibilities that the Westside embodies, I’d also love to see Ginsberg color a bit more outside the lines at Bocado. His veal cheek with grits is a good starting mark. It’s as tender as pot roast, and of all the less familiar animal parts being embraced by chefs, the veal cheek could well be the one diners come to accept. But a few too many other dishes—standard mussel and crab offerings, mushy gnocchi, salads with the usual ingredients—come off as pleasant, and Ginsberg strikes me as a chef too ambitious to be content with “pleasant.” I’ll be looking for more surprises such as the almond-and-apricot-studded chocolate tart with root beer ganache. Root beer ganache? It looks like a muddy slick on the plate, but its enigmatic scents of licorice and mint mingle with the chocolate in wild, wonderful ways. More like that, please: The neighborhood can handle it. —Bill Addison

Photograph by John Autry and Charlotte Fekete. This review originally appeared in  our January 2010 issue.