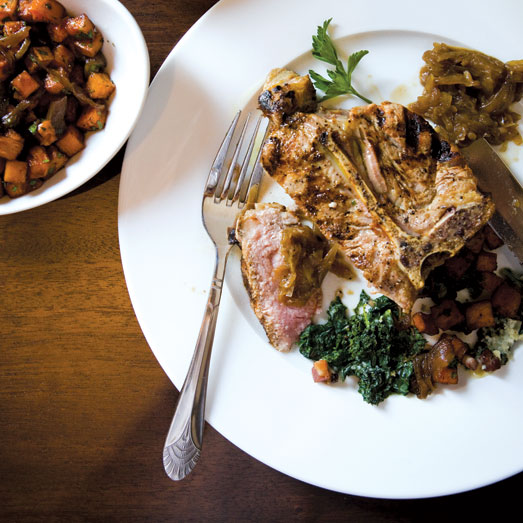 In the late 1980s, my parents and I visited Boston for the first time to check out colleges. We naively booked the trip in January. A half foot of snow blanketed the city on the day we arrived. The concierge at our hotel encouraged us to trudge the few slushy blocks to a Northern Italian restaurant called Davio’s. It was on Newbury Street, a hub of posh shops and eateries. Davio’s had a relaxed cafe upstairs that served pizza and pasta; we descended to the more formal dining room below street level.

I needed to literally inhale warmth, so I ordered risotto. I’d heard of risotto before, but in that cold, unfamiliar climate, a bowl of hot, creamy rice appealed like never before. How did each grain of rice remain distinct yet also meld into a cloud of savory pudding? I felt thawed—and awakened to a new delight. I ended up spending my college years in Boston, and when the long winter felt especially unbearable to my Southern soul, I would gather the earnings from my job as a bed-and-breakfast cook to go savor a bowl of sustaining risotto at Davio’s.

Fast-forward over two decades: I’m sitting in the newly opened outpost of Davio’s in Phipps Plaza, munching on . . . spring rolls? Four differently flavored rolls have been cleaved in two, with the matching halves propped close together on a sectioned platter and adorned with all manner of swirling, squiggly embellishments. They look more like miniature models of futuristic skyscrapers than enticing appetizers. The Philly Cheese Steak spring roll comes topped with an orbit of smoked onion rings and is placed over squeeze-bottle drizzles of homemade ketchup and mayo. It also carries a registered trademark, as does the Chicken Parm spring roll with marinara sauce. Buffalo Chicken with blue cheese dressing and Shrimp Cotija with citrus aioli complete this peculiar, multiculti quartet. They all taste fine, in the way that fried morsels with vague sauces passed at cocktail receptions can absentmindedly satisfy.
Where are the al dente specialties I remember so fondly? The risotto and pastas do still survive, executed with skill but buried in a menu that reflects owner Steve DiFillippo’s cumulative ambitions since he bought Davio’s in 1985. He pulled the original restaurant out of financial distress, shifted the cooking from Southern Italian, drew crowds and raves, and opened and closed other locations of Davio’s around the Boston area. In late 2002, he moved his flagship off Newbury Street, by which time the concept had officially morphed into a “Northern Italian steakhouse.”

As for those Philly Cheese Steak spring rolls: The executive chef at Davio’s Philadelphia branch, which launched in 1999, invented them. They became so madly popular that DiFillippo began producing frozen versions—sold in Northeastern supermarkets—and serving other fusion mutations in his restaurants.

Which brings us again to the latest Davio’s, housed in a transformed space with pillars, hardwood floors, and sedate lighting that was formerly the rear section of Phipps’ Niketown. DiFillippo is, without question, a shrewd businessman. He knew that to make a success out of a fine-dining restaurant opened in an upscale mall during dubious economic times, he needed a secret weapon. And he snagged one: Claude Guillaume, the former maitre d’ of the deeply lamented Dining Room at the Ritz-Carlton, Buckhead.

While chefs bask in celebrity glory, fewer front-of-house personalities garner their own fanbases these days. But Guillaume has fierce loyalists, and he deserves them. His paternal grin and casual, confident elegance epitomize hospitality. Just the way he pulls out a chair can fill you with reassurance. He assembled a staff—many of whom have worked with him before—that instantly makes Davio’s one of the best service experiences in the city. This crew works as a team, reading tables masterfully and navigating between chummy and graciously professional.

Sommelier Robert Evans, another Ritz-Carlton Buckhead alum, shepherds you with polish through a wine program rich with unfamiliar but lovely Italian options. You need to be specific about price, though. “Can you recommend something adventurous, not too tannic, that will go well with steaks and won’t break the bank?” I asked Evans on my first visit. He brought out a Super Tuscan that paired beautifully with the meat. When the bill arrived, I wheezed: It cost $90.

Everyone’s definition of affordable is different, I suppose. At a subsequent meal, I specified price much more succinctly and was directed toward a $36 bottle of Sicilian Nero d’Avola that matched the entrees eloquently.

The menu is one of those sweeping documents at which you blink for a while before your mind slowly begins to absorb it. Do you go the New American route with tuna tartare, followed by organic salmon with sun-dried tomato-
mascarpone orzo? Rock the steakhouse vibe with a chopped salad, a rib-eye, and sides of mashed potatoes and spinach? Or do you embrace Davio’s Italian essence, starting with fennel-spiked sausage before disappearing into a fortifying mound of tagliatelle Bolognese?

Obviously you can mix and match, but the Italian items and the steaks deliver the most consistent pleasures. Too many of the New American creations taste like throwbacks from ten years ago. Atlanta, blessedly, has moved past balsamic glazes and the chemical funk of truffle oil defiling mac-and-cheese.

Better, then, to concentrate on those plucky sausages, served over cannellini beans and roasted tomatoes, or a fluffy meatball doused with balanced, gentle tomato sauce. I’m partial to the pastas—such as spaghettini with plump shrimp, chunks of smoked bacon, peas, and garlic olive oil—that touch down on the bombastic flavors and good-natured soul of Italian American cooking. (Avoid the pappardelle with shreds of short rib that bob in oil, though.)

It won’t come as a surprise that my favorite part of the menu is labeled “Classici.” These are dishes from the original Davio’s. Lobster and asparagus flavor the risotto, and if it doesn’t ascend to the majesty of the risotto at Inman Park’s Sotto Sotto, it feeds my nostalgia capably. So does a monstrous grilled porterhouse veal chop, sauced with a subtle port reduction and a walloping side of creamed potatoes.

Photograph by Iain Bagwell. This review originally appeared in the November 2010 issue.