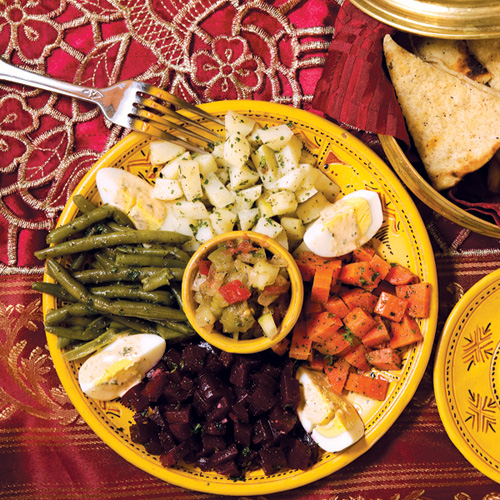 A belly dancer dressed in turquoise-colored attire flutters to the center of the dining room, twirling a flaming sword. The DJ on the podium behind her cranks up the Arabic techno a few more decibels as she spins, drops onto the rug-covered floor, and continues rippling and shimmying while she balances the sword on her head. The flickering fire extinguishes, but she’s still beaming the kind of euphoric smile usually reserved for shampoo commercials. The five-year-old at our table stares mesmerized, his jaw hanging slack. I look over at his father: same expression.
Yet scanning the Saturday night crowd at Imane, a Moroccan restaurant in Duluth, is nearly as entertaining as the floor show. A raucous family has taken over a banquette that spans an entire wall. They clatter plates, talk over one another, and constantly play musical chairs. It’s hard to tell: Is anyone actually eating?

In a far corner, two men sit quietly as they smoke a hookah and watch the belly dancer intently. Their gazes are studies in practiced neutrality. Next to us, two women scan the menu and settle on the Imane Sampler—an appetizer assortment of hummus, baba ghanoush, rice-stuffed grape leaves, falafel, and a diced eggplant and tomato salad called zaalouk. The server delivers this medley in yellow ceramic dishes covered with hand-painted lids, all of which she plucks off in an efficient flourish.

It’s a fetching spread, but I’m tempted to lean over and offer advice: Keep exploring. The more familiar Middle Eastern starters don’t reveal the sensual triumphs of this restaurant’s kitchen, or the many European influences (French, Italian, Spanish, Portuguese) absorbed into North African cooking over the centuries. Dive in to the true Moroccan exotica, I want to say—simmered tagines, savory pastries, and a presentation of couscous that reveals its glories from before that tiny semolina pasta became a bland deli-case standard in America.
Imane Sannoun, a native of Casablanca (she must be so weary of hearing Humphrey Bogart’s lines quoted to her), opened her restaurant in November 2009. At first, the food was sometimes under-seasoned or slapdash. A year into its life, though, Imane now feels like a destination for Moroccan cuisine—a less pricey, more relaxed experience than Buckhead’s long-standing Imperial Fez.

I still find the cooking more precise on weeknights, when the crowds thin, the belly dancer isn’t whirling, and the techno doesn’t boom quite as loud overhead. Then I more easily notice the fine details that diminish the restaurant’s strip-mall surroundings: the silvery glint to the patterned tables and chairs, the curvaceous shape to the window drapes that evoke Moorish architecture, and the warmth of rugs underfoot—a welcome counterpoint after the cold cement floors of so many other restaurants.

On a frigid night, a bowl of Imane’s harira recharges the senses. Muslims consume this tomato, lentil, and chickpea soup to break the day’s fast during Ramadan. This version is medium-thick and silken, with scents of lemon and cilantro wafting up each time you dunk the spoon. The Maghreb plate (the name alludes to the five countries that make up North Africa) would cool on a summery day: Diced beets, carrots, potatoes, and green beans are arranged separately in quadrants around the plate, all drizzled with tahini dressing. In the center is a cup of shlada, which sounds like Yiddish slang but actually describes a tomato and pepper mixture with a vinegary twang akin to Greek salad. Honestly, I would relish this collage more if the ingredients weren’t served quite so chilled: It freezes the vegetables’ flavors into suspended animation.
For my ideal meal at Imane, I’d bypass all the appetizer dips and nibbles and instead split a b’steeya with tablemates. If you’ve never tried this complex dish, it sounds a little bizarre: Chicken braised with onions, saffron, and other spices is layered with ground almonds, wrapped in phyllo dough and baked, and finally dusted with powdered sugar and cinnamon. It stands as one of the great sweet-savory balancing acts of the culinary world, and this one works. Your server may look at you funny when you ask for it as a starter; it’s listed as an entree. Trust me, though: Its headiness functions better to pique the palate than to fully quell hunger.
Besides, tagines and couscous should really be the main-course objectives in Moroccan restaurants. The word tagine refers to an aromatic braised meat dish and also the vessel—a flat, ceramic disc with a cover the shape of a dome or a wizard’s pointy hat—in which the food is traditionally cooked. If you’re a newcomer to tagines, start with the Meknes: lamb shank in gentle saffron broth, garnished with almonds, sesame seeds, and sticky prunes. Again, that equilibrium between sweet and savory.

I love the Rabat (Sannoun renamed classic tagines after Moroccan cities): meatballs baked in a tomato sauce, sharpened with garlic and cumin, called sharmoula. The dish also includes beaten egg, which sets as it cooks among the meatballs and sauce to resemble continents adrift in a crimson ocean.

Now for the couscous. If you’re in a group, order the El Basha option: a mix of chicken and beef kebabs, a lamb chop or two, and merguez sausage. The meats arrive first, but don’t gorge yet. Moments later, a server brings a bowl of steamed couscous and a pitcher of broth filled with carrots, cabbage, and potatoes. She’ll instruct you to generously ladle the broth and the vegetables over the couscous and then arrange meat over it. Ahh. The language of comfort food is indeed universal. Is this a little too mild? Ask the server for harissa, a homemade paste of chiles and spices that will snap your taste buds right out of their ennui.
After these layers of flavors, I tend to keep dessert simple—an orange salad sprinkled with crushed almonds and orange blossom water, or perhaps the cookie plate (the soft coconut ones are the best). I’m not a big hookah guy, but plenty of customers linger after dinner, puffing flavored tobacco through those elaborate water pipes. I asked Sannoun which flavor she prefers. “I suggest the grape, mixed with a little peach or mint,” she says. “The guys come in and ask for the strawberry hookah. I tell them, ‘It’s for girls, actually.’ The number one seller is double apple. I’m surprised how many people try it; I thought only the Arab Americans would want it.” Atlanta, I think this is the beginning of a beautiful friendship. —Bill Addison
Imane
RATING **
3455 Peachtree Industrial Boulevard, Duluth
678-638-7990

Photograph by Deborah Whitlaw Llewellyn. This review originally appeared in our January 2011 issue.