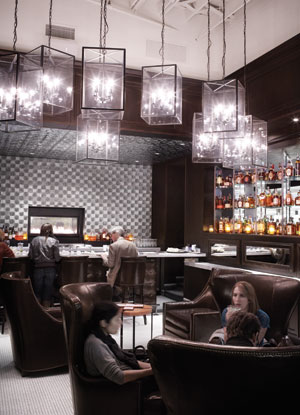 When designed-to-the-hilt Ink & Elm came on the radar in early September, an immediate reaction echoed through Atlanta’s food circles: A fine-dining restaurant opened in Emory Village? The college district that thrives on cheapo chains and joints dispensing pancakes and tacos now boasts a gourmet bastion with valet parking? Whoa. Its very existence seemed to mock the memory of Everybody’s Pizza, the populist favorite that dwelled a few doors up and closed in March after forty-one years.

But really, an upscale haven isn’t such a radical notion for the area. Professors and university administrators need their own stomping grounds, and the moneyed locals of nearby Druid Hills would enjoy a tony dining option that doesn’t require schlepping to Decatur. Ink & Elm’s owners—Nick Chaivarlis, Hunter Jefferson, and Keith Osborne, all first-time restaurateurs—are banking on this untapped clientele. Chaivarlis grew up in a family that ran restaurants in Georgia and Tennessee. Osborne previously managed Midtown’s Gilbert’s Cafe. Jefferson made an unlikely leap: He was practicing law and, after managing some of the litigation between Apple and Nokia, was exhausted enough to switch careers. One can only hope he finds restaurant life less grueling.

These guys have let themselves dream large. They recruited an up-and-coming chef, Stephen Sharp, who made his name working at Downtown’s French American Brasserie (FAB) and Buckhead’s Blue Ridge Grill. Sharp knows his way around trending ingredients, and he composes a confident menu that rolls with the seasons. The team also came up with a whopper of a business plan. The 7,300-square-foot space houses three concepts: a formal dining room, a casual tavern, and a swank lounge between them. They themed the place, in honor of their adopted community, as an homage to Druid Hills planner Frederick Law Olmsted. The Emory-area neighborhood, one of Olmsted’s final projects, was among Atlanta’s first planned suburban developments at the turn of the twentieth century.

Atlanta’s design firm of the moment, AI3, took the owners’ leitmotif and went all in: This may be their magnum opus. The space exudes the masculinity of a steakhouse but feels more quixotic and less industrial than most of the city’s ambitious restaurants. Richly grained walnut boards cover the floor of the tavern section. Tweedy upholstery lines its booths. Drafting lamps with robot-like arms jut from over the bar. In the back, you can glimpse the kitchen’s glass window overlaid with a translucent image—a photograph taken in nearby Lullwater Preserve of a canopy of elm trees. The effect is dreamlike: You watch the cooks in shadowy silhouette behind a scrim of leaves and branches.
The kitchen window extends from the tavern to the more formal dining room and lounge, which are separated in part by a wall of bourbon and whiskey bottles glowing like molten caramel. Leather club chairs and a second bar define the lounge. Another set of booths for the dining room bookends the space; these are three-sided and roomy, with curtains the color of Granny Smith apples billowing behind them to heighten the sense of luxury.

The crowds early on match the atmosphere: mature, well-heeled types appreciating genteel cocktails (an Aviation with its demure splash of crème de violette, a potent Sazerac) and eating at a leisurely pace. Such serenity is a welcome change of pace, though I can imagine the scene turning bonkers during Emory’s family weekends and graduations.

The meticulous setting almost overshadows the cooking. You can certainly eat well here, but the main dining room offers one of those menus where you don’t immediately grasp the chef’s mind-set. Is it Southern? Well, kind of: The kitchen sources from the mandatory cadre of nearby farmers and artisans for a restaurant of this caliber. It really falls more into today’s hazy definition of New American cuisine: local protein or star vegetable, plus a bevy of seasonal fillips, plus an array of global spices, equals artfully plated appetizers and entrees.

Sharp excels at salads. He combines crisp-tender roasted broccoli with blue cheese, raisins, Georgia peanuts, and frisée cloaked in honey-citrus vinaigrette. Such a whirligig of contrasts means the palate stays entertained to the last forkful. An autumnal jumble of roasted apples, cubed butternut squash, endive, and wisps of beef jerky in shallot vinaigrette succeeds in the same way.

Sometimes Sharp reveals an experimental streak: He thrashes sushi-grade salmon with harissa, celeriac puree, and benne seeds. And though chicken may be the ultimate blank canvas, a mix of figs, cipollini onions, sumac, lemon, and crumbly fried collard leaves never really coalesces around the bird. Other times Sharp goes old-school, a style with which he seems to have a more practiced hand. Seared sweetbreads perch atop creamed spinach with mushrooms and capers—an earthy and elegant appetizer. That kind of beginning begs to be followed by the rib-eye, offset with charred Vidalia onions. And I love the pungent surprise of marjoram sprigs tucked into whole snapper, crowned with salsa verde and flanked with tiny roasted carrots and fennel.

The tavern menu veers toward casual, zippy small plates: clever sweet potato buns in the fashion of Chinese bao, stuffed with ham, black garlic, and cabbage; meat and lamb meatballs bobbing in a crock filled with tomato sauce; Virginia oysters broiled with shallot-and-Tabasco butter. If I lived in the vicinity, I’d hang out here, sampling half glasses of Spanish Grenache Blanc or Napa Pinot Meunier from the smartly edited wine list.
You can order the same desserts on either side of the restaurant. Kudos to pastry chef Elodie Westover: She kicks off meals with complimentary savory “profiteroles” (more like a cross between popovers and gougères). Among her sweets, go for the sophisticated cinnamon bun glazed with bourbon and sorghum and varnished with melted aged cheddar. You can also savor that treat, minus the cheese, at breakfast. That’s when the tavern becomes a makeshift coffeehouse, and Jordan Chambers, one of the city’s best baristas, pulls a balanced espresso using beans from cult roaster Intelligentsia.

Yes, this restaurant has myriad moving parts. I respect its intentions, though. We need more grown-up places that feel like glamorous hideaways. Even in as unlikely a setting as Emory Village, I’m glad this earnest crew is taking up the cause. 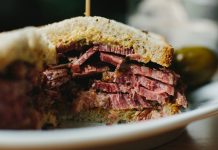 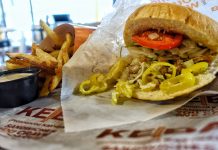 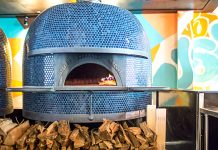