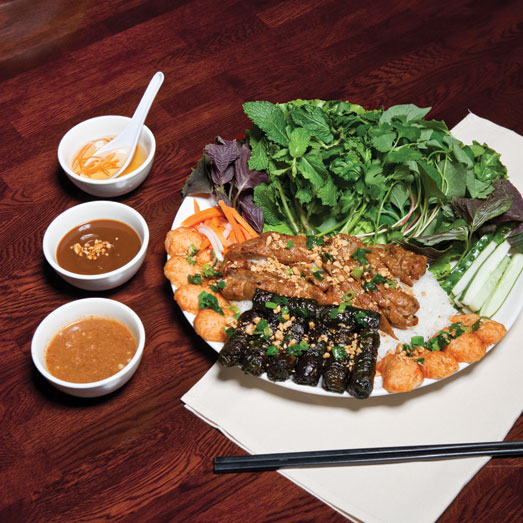 I sat in the foyer of Nam Phuong in Norcross, hunched over my iPhone and madly Googling the names of Vietnamese dishes I’d never heard of before. On the restaurant’s back wall, a glowing white screen broadcast the restaurant’s daily specials. The program running the projection rhythmically underlined the words over and over again—the PowerPoint equivalent of a broken record. The dishes were listed only in Vietnamese.

Over the years, I’ve developed a paranoia specific to food critics: When I’m in any type of Asian restaurant and find menu items that aren’t translated into English, I’m convinced that they represent the zenith of the kitchen’s talent and am certain that if I don’t somehow decipher these specials and persuade a sometimes-reluctant waitstaff to serve them to me, I’ll have missed the truest, most indigenous aspects of the restaurant’s cuisine and culture.

We tested my compulsive theory on one of the special appetizers called banh tom co ngu, which I knew from my online search translated simply as “shrimp cakes.” These weren’t akin to crab cakes, though: Single, plump shrimp were cradled atop nests of shredded, deep-fried sweet potato. Next to these bundles, like a forest backing up to a beach, loomed the riot of lettuce and herbs that makes Vietnamese cuisine so distinctive. For every fried morsel, there’s almost always something leafy alongside. We nestled the shrimp and sweet potato in a lettuce leaf with herbs, dipped it in clear sweet-and-sour sauce, and dug in. Mmm. The combination of tingly mint and earthy sweet potato particularly delighted. (Southerners should play more with that combination.)

I felt immensely self-satisfied with my discovery until I took a good look around the sprawling room. My tablemate and I were the only non-Asians, and none of the other customers nibbled shrimp cakes. Most were instead constructing their meals from a large platter neatly arrayed with glossy proteins. “That’s the Ba Vi,” said our server, pointing to the menu. “Three Delights. It’s our specialty.” Perhaps this wasn’t a restaurant that saved its best efforts for insiders after all.

Another server dropped off a stack of plastic-looking disks. These were rice paper wrappers, the same ones used to make fresh summer rolls often stuffed with seafood or pork and julienned vegetables. We soaked the disks in a bowl of hot water until they softened, then spread them out and began composing—a tuft of noodles on the bottom, slivers of pork and a la lot roll, and finally some greenery. The crowning touch was palate-arousing sauce based on nuoc nam, the ubiquitous fish sauce in Vietnamese cooking, mixed with pineapple and mam nem, a fermented anchovy paste. The collage of flavors ricocheted differently with every mouthful.

Two dishes in and I was already grateful that Nam Phuong had opened. Vietnamese cuisine is in a rut locally. The metro area offers plenty of options for well-made pho, the aromatic beef soup, and Buford Highway houses several worthwhile stops for banh mi, the sandwich of meats, pâtés, and vegetables stuffed into baguettes.

Wonderful though these iconic dishes may be, they’ve pigeonholed Vietnamese food in Atlanta. There’s a kaleidoscope of other sophisticated dishes worth exploring—rice noodle dishes, stews, seafood and meats cooked in clay pots, boldly seasoned salads. Only a few other places delve into these realms, including first-rate Nam (owned by Alex and Chris Kinjo of the MF Sushi restaurants) and two locations of Com Vietnamese Grill, which don’t have the finesse they once did.

Owner and executive chef Tieng Nguyen surely noticed the lack when she launched the Norcross restaurant—her first Nam Phuong outside Philadelphia—last August. Nguyen had three successful restaurants in Philly, sold two a few years back, and moved to Atlanta with her family to focus on her new venture in Oakbrook Square Shopping Center off Jimmy Carter Boulevard. Nearly a year into its inception, this affordable restaurant (most entrees cost under ten dollars) is an obvious hit with the Vietnamese community, and I’ve recently noticed more non-Asians delving into the restaurant’s exotic vistas.

Summer is the ideal time to chomp your way through Nam Phuong’s salad list. Two classics—juicy lotus root salad with shrimp, and papaya salad with sheer, chewy snippets of beef jerky—revive the taste buds with their stunning freshness, but the duck salad reigns as my current darling among these choices. Slightly warm slices of duck mingle among shredded cabbage, carrots, banana blossoms, herbs, and lettuce, all tossed in ginger-infused dressing. This is all sharing food, of course, and the duck salad paired with banh xeo—a crisp, eggless crepe enfolded with pork, shrimp, and vegetables—is one of the most satisfying warm-weather lunches I can imagine.

When the days grow shorter, venture into the menu’s more warming options. Beef stew, steeped in an anise-scented broth reminiscent of pho, demonstrates France’s influence on Vietnam’s cuisine. And I’m fascinated by Nam Phuong’s version of congee, the rice porridge more typically found (in our country, anyway) in Chinese restaurants. Versions of congee proliferate all along the coastal, rice growing areas of Southeast Asia, and this one is thinner than most Chinese versions I’ve tried but heartier in proteins. Fish congee, which I like to spike with soy sauce and chili oil, will dispel any January chill.

Speaking of Chinese cooking, there’s a fair amount of it slipped into the mondo menu. Dishes are never specifically identified as such, but if you come across a description that reads “chicken sauteed with black bean sauce,” you aren’t getting your Asian cuisines muddled. It’s Chinese. And on the whole, the Vietnamese offerings taste more finely tuned.

Pho is also on the menu, but not many customers seem to order it. Noodle soup isn’t the restaurant’s strong point, anyway. I’m heartened that patrons gravitate toward Nguyen’s nonconforming specialties. Maybe other Vietnamese chefs and restaurateurs will observe this success and decide to branch out into underexplored culinary territories themselves.

Photograph by Christopher T. Martin. This review originally appeared in our July 2010 issue.

Scenes from a Ramadan Iftar meal in metro Atlanta