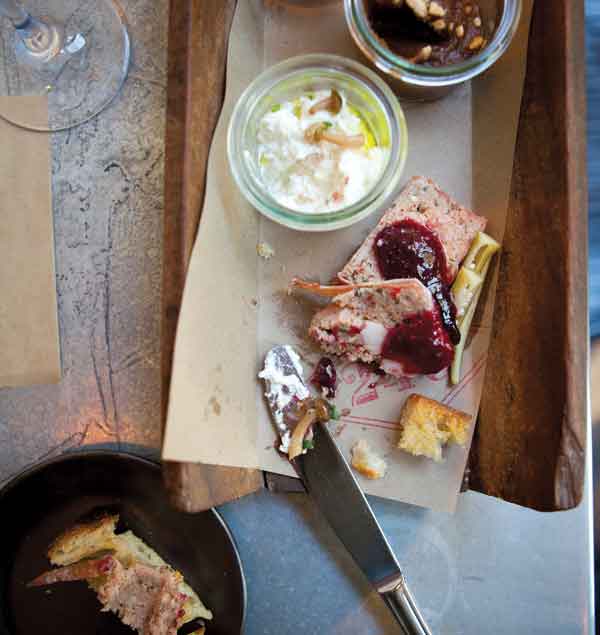 I thought I’d stumbled onto a private party for the local food glitterati the first time I visited Decatur’s No. 246 in July. It was the restaurant’s inaugural Monday, six days after opening for business. The full house generated such a clamor that the noise bouncing off the white brick walls vibrated in my hands and feet as well as my ears. High-profile chefs like Kevin Rathbun and Empire State South’s Ryan Smith shouted happily, twirling pastas and sharing pizzas among wine distributors and off-duty managers and servers from other restaurants. What drew them—and the unremitting crowds that have shown up night after night since then—so immediately?

Combined star power helped: No. 246 is a collaboration between Ford Fry, executive chef–owner of JCT Kitchen & Bar, and Drew Belline, who was previously chef de cuisine for five years at Floataway Cafe. But I think much of the appeal stems from how desperately Atlanta’s food freaks crave a hot new restaurant to swoon over. These are barren times; only a couple ambitious, independent restaurants that break from trends and offer fresh ideas on the plate open annually. Empire State South did it last year. Miller Union stands out from the year before.

No. 246, named after the building’s original plot of land, launched with high expectations. Belline, who is in charge of the kitchen, designs the menu around an Italian sensibility but is quick to summon the American catchwords of the day: local, seasonal, simple. Of course, those axioms are already endemic to cuisine in Italy. But Belline doesn’t strictly adhere to any one style; the sherry-bacon vinaigrette sluiced over roasted chicken reminds me of the many farm-to-table Southern efforts around town, as do spreads like pork rillettes and roasted eggplant with chiles and mint. Instead of employing an imprecise Italian-Californian-Southern aesthetic, I wish he delved into the provincial cooking of Campania or Tuscany or Emilia-Romagna. We sure could use some specificity among our city’s broad-minded Italian restaurants.

If, in its first months, No. 246 offers neither the innovation nor the regionality I’d hoped for, it is nonetheless capable of some high notes—and I’m not just talking about the ear-numbing decibels that can leave your voice shredded after bellowing to be heard across the table. (Sound dampeners, mercifully, are in the works.) Local designer Smith Hanes completely re­imagined the former Eurasia Bistro space. It resembles the first floor of a country dream home—exposed brick; reclaimed wooden floors that alternate pale and dark hues; oversized Edison lightbulbs encased in glass; a granite bar; an evocative pile of wood for the oven stacked next to the kitchen’s open window. The coziness already makes the restaurant feel like a neighborhood staple, a perception bolstered by a mostly competent and always hustling waitstaff, and by bartenders who make witty cocktails such as a Pimm’s Cup with Cynar (an Italian aperitif) and homemade limoncello.

Familiar foods add to the sense of well-worn comfort. You’re encouraged to start with platters of meats and cheeses that include salami from Avondale Estates’ Pine Street Market and soft-ripened Green Hill from South Georgia’s Sweet Grass Dairy. Collections of spreads, so popular around town these days, revolve frequently; I’ve enjoyed the housemade ricotta mixed with earthy preserved chanterelles and lemon, a suave rabbit terrine that deserves a permanent place on the menu, and a prosciutto conserva that tastes like a sophisticated riff on deviled ham. I’m not as fond of the toast that accompanies these starters; the bread is cut into long blocks that make the actual spreading or dipping of ingredients awkward and disproportionate.

A “flour and water” section brings on the pastas and pizzas. Carbonara, in the midst of a local resurgence, gets a zingy makeover. Belline uses pappardelle, a wider noodle atypical for the dish, and he throws in a handful of herbs among the intensely smoky bacon and Parmesan. The clincher is an egg—first poached and then coated in panko and quickly deep-fried—perched on top that oozes its yolk, enhancing the sauce as you stir it into the pasta. I’m even fonder of an uncomplicated spaghetti creation tossed with shrimp, garlic, chiles, and parsley and then sprinkled with breadcrumbs for frisky crunch.

With the proliferation of pizza these days, it becomes ever more challenging to impress, and Belline has some tweaking to do. The issues are not in the crust, which teeters between crackery and bready and remains compulsively satisfying even as it cools. The toppings require calibration. One pie that stars broccoli rabe hides lemon slices among the greens that trample every other flavor with bitter pith. And somehow, the basic margherita turns out too salty.

Sandwiches at lunch better recall the understated savvy that Belline consistently displayed at Floataway. The porchetta—slow-roasted pork—dressed with arugula, pickled red onion, and aioli and accompanied by a bowl of roasting jus is a hearty, drippy joy. Choose the meatball sandwich—veal, pork, and beef balanced into fluffy marvels and glossed with tomato sauce and Parmesan—rather than the oddly gamy burger.

No. 246 doesn’t accept reservations; the owners thought that would better encourage a relaxed atmosphere, though I don’t find it relaxing to wait more than an hour for tables on the weekend. The exception to the policy is the chef’s table—a metal counter that overlooks the frantic, enthralling kitchen—where seatings are reserved for 6:30 and 9 p.m. At $50 per person for five courses, the chef’s table dinner is a relative bargain (entrees like skirt steak and pan-roasted trout range from $19 to $26) and by far my favorite experience at the restaurant. Our meal began with a substantial amuse-bouche of ahi tuna sashimi jazzed with horseradish granita, grapefruit, pickled pink peppercorn vinaigrette, and sharp herbs. At last, some punchy personality! After an abundance of toasts and spreads (including off-the-menu apple butter and plum jam) and an heirloom tomato salad lovely in its austerity, the kitchen brought out three pastas, including tagliatelle in a brothy white wine sauce with oysters, clams, and cherry tomatoes—a variation of a dish Belline serves at his $24, four-course spaghetti suppers on Monday nights.

The chef next showed off a lovely beeliner snapper the kitchen had roasted whole, and then—nice touch—he filleted and divided the fish, gussied up with salsa verde and julienned watermelon radishes. A fun, experimental duo of fried rabbit tenderloin and pulled pork with oyster mushrooms, greens, and sultanas concluded the savory courses. Dessert was a chocolate-orange tart, slightly bland on its own but magical when combined on the fork with the potent sea salt and crushed coriander seed sprinkled next to it.

When the crowds simmer down, maybe we’ll see more of this kind of daring spark on the regular menu. Soothing dishes may always be welcome in a neighborhood that loves to eat out, but I know Belline is also capable of creativity that could inspire our entire dining scene. —Bill Addison

Photograph by Iain Bagwell. This review originally appeared in our October 2011 issue.