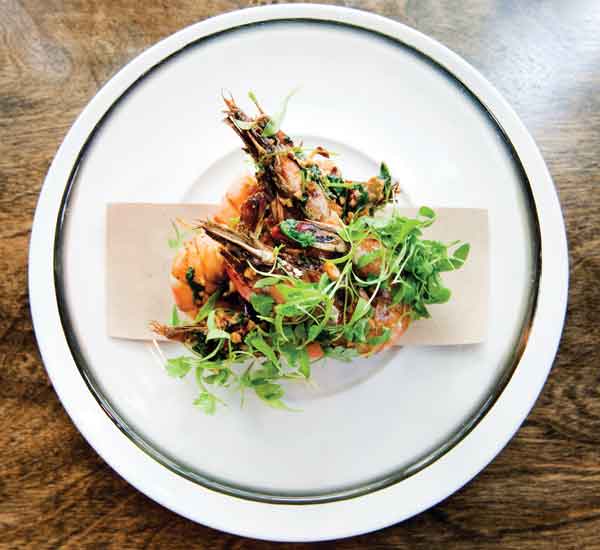 Cauliflower sauteed with dates and green olives on a taqueria menu? I encountered this oddball side dish in January the first time I ate at East Atlanta’s Holy Taco. It certainly seemed out of place alongside guacamole and brisket tacos, but the combination itself, when I tasted it, wasn’t outlandish at all: The salty-sweet tango of slivered Medjool dates and snippets of nutty Lucques olives entwined the same way that chocolate with pretzels or bacon with maple syrup do, and the neutral cauliflower made for a receptive backdrop.

In fact, it was one of the most wonderfully peculiar things I’d tried in ages—and many of Atlanta’s neighborhood restaurants could use a little more peculiarity. In the last few years, customers have sought more comfort than provocation when dining out. As a side effect, a creative drought has spread through kitchens, resulting in too many tame, homogenous menus around town.

True-minded Mexican, it turned out, wasn’t Phalen’s forte. He instead slowly weaved in creations inspired by chefs he admires, like nonconformist David Chang (who owns New York’s Momofuku restaurants and made pork belly buns ubiquitous) and Washington, D.C.’s José Andrés, who trained with the god of experimentation, Ferran Adria, at Spain’s El Bulli. Phalen wasn’t going so far out in orbit that he was fashioning tortillas from jellified squid, but his affordable ingenuities started attracting attention nonetheless.

Little surprise, then, when the Holy Taco gang announced in February that they were embarking on another restaurant, a place where Phalen could concentrate more on his emerging style of cooking. The One Eared Stag opened a week before Memorial Day in Inman Park, in the former location of Shaun’s. The unassuming, two-room space appears nearly identical to when Doty vacated, tables and all, except for one wide-eyed addition: taxidermy. Animal heads line the walls of the bar area, including, yes, the restaurant’s namesake—a buck sporting the Vincent van Gogh look.
I asked Phalen over the phone how it felt to stand center stage at the kitchen window, in the same spot from which his former boss recently ruled. “Awkward,” he said with a laugh. The food, though, reveals a confident chef with a sound strategy. Phalen intends to push avant-garde cuts of meats and daring flavors, but he also realizes that he needs to earn the neighborhood’s trust.

The prices—many small plates in the single digits, no entree above $19—are lower than Shaun’s. Phalen adjusted the opening menu four times before the restaurant’s first day, balancing the mix of intrigue and wider appeal. The menu is more docile than I expected, frankly. A person of conservative tastes can find much to enjoy—an earthy pea salad jazzed with mint and Manchego, a smooth gazpacho embellished with a crab and grape tomato salad, half of a roast chicken with gently spicy creamed corn.

But plenty of customers are eager to nibble at Phalen’s initial forays into the unconventional. I’m shocked at how many plates of neatly stacked fried chicken necks with kimchi pass through the kitchen window. I don’t grasp the fascination: To eat them is, well, a pain in the neck. The meat is so embedded in these suckers that they basically function as delivery mediums for chicken-flavored batter. If that tempts, enjoy. I’ll be eating roasted beef tongue instead. The only thing challenging about this dish is wrapping your head around the anatomical reality—the meat has the texture of pot roast. Thin slices of heirloom tomato and dots of pesto add brightness and familiarity.
Phalen takes hearty Bolognese and tinkers with it mightily. He lightens it with a dollop of goat cheese and flecks the sauce with shards of pig’s foot meat. His choice of pasta is one of the more perversely named in Italy: the loosely spiraled strozzapreti, or “priest stranglers.” A main course of rabbit involves two preparations: fried leg encased in a thin crust and a petite grilled loin, both cooked beautifully, with a parsley-caper salad to reset the palate.
Lunch eases up on the more polarizing meats. The kitchen builds seductive sandwiches: grilled ham and Manchego boosted with sweet complexity from quince paste; a dulcet crab salad bound with lemon aioli and served on a brioche roll; a BLT riff made with pork belly (you could see that one coming), heirloom tomatoes, ramps, and mayo enriched with lard.

The sardines Phalen toyed with at Holy Taco show up on both the lunch and dinner menus, but they make a particularly lovely noontime meal—three mild, whole fish stuffed with minced arugula, Meyer lemon zest, and fermented black garlic (a trendy Asian ingredient), peeking out from a thicket of arugula salad.

I watched a man a couple tables over struggle with the sardines, trying to figure out the most efficient way to separate the fillets from the bones. An attentive server would have noticed and helped, but those are in short supply at One Eared Stag. The staff can be comically clueless, like befuddled characters in a Judd Apatow film. One evening a server stumbled through an explanation of the dessert special, a variation on pan de chocolate with toast, preserved strawberries, and a chocolate-hazelnut spread. “Oh, like Nutella?” a tablemate asked about the spread. “I guess sort of like Nutella,” the server replied. “Well, yeah. No, I mean it is Nutella. Good call.” On a Sunday when Phalen wasn’t in the restaurant, five servers ambled around the dining rooms, chatting with one another, yet it took ten minutes for one of them to approach us.

The kitchen isn’t as adept in Phalen’s absence, either. The batter of a fried eggplant special flaked off unappealingly in a way I experienced with neither the rabbit nor the chicken necks when the chef was at his post.

Every new business has its unique travails. Phalen may not have to work as hard as he once feared to convince the neighbors to swallow offal. But he should be spending his time elevating the staff to the promise of his cooking. —Bill Addison
One Eared Stag
RATING **
1029 Edgewood Avenue

Photograph by Joe Martinez. This review originally appeared in our August 2011 issue.