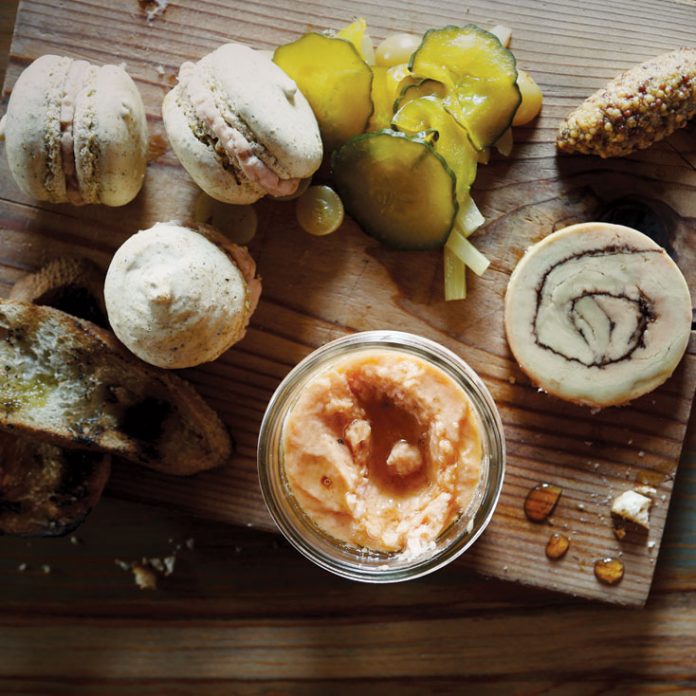 It’s 8 p.m. on a Friday night, and I’m huddled inside the entrance of Seven Lamps, a new restaurant in the northwest corner of Buckhead’s Shops Around Lenox, waiting for a place to sit. The snug, five-sided room incorporates the casual design elements du jour: Reclaimed wood (from a North Georgia mill) cover the floors; old bricks, stacked vertically in varying shades of red and white, make up one wall; porcelain subway tile gleam in the open kitchen. The number of large tables—two six-tops, two eight-tops (one a “chef’s table” by the kitchen counter)—surprises, considering the tapered, angled shape of the space. On a busy night you’re likely to get chummy with strangers, even if you made reservations. “Yeah, communal seating,” one hostess said on a previous visit. “It’s great in theory, but in reality it can be a mess.”

Tonight I’m solo, hoping to snag a spot at the bar that really isn’t a bar: It’s two tall tables pushed together in front of an alcove where bartenders frantically mix cocktails and pour wine. When it’s packed (like it is this evening), the hostess takes control of who sits in this area as well. I’m idling by a front window and watching the well-dressed, multigenerational crowd for about twenty minutes when two people surrender barstools. The hostess immediately ushers over a couple who came in after me. “Hey, what about me?” I say to her. “Oh my gosh, I’m so sorry,” she replies. “I thought you were seated already!” When I was standing five feet from you? M’kay.

After another fifteen minutes she finds me a bar vacancy. A mixologist-cum-server soon asks if I’d like a drink. I request a Toronto—Canadian whiskey, Fernet Branca, and gomme syrup, a variation on simple syrup made with gum arabic that renders a silkier texture. “I’ll just need your credit card,” he says. “Oh, I’m eating my whole meal here,” I reply. “Fine,” he says, “but I’ll still need a credit card to secure your bar tab.” Apparently if I wanted treatment like a dinner guest and not merely a tippler, I should have vied for a place at one of the communal tables . . .

Seven Lamps opened in mid-December, and all new restaurants need a few months to calibrate their service (and food, which I’ll get to shortly). Still, I didn’t expect such a disheartening reception from a venture led by executive chef and co-owner Drew Van Leuvan, a veteran of the Atlanta dining scene. Van Leuvan named the restaurant after a 186-page essay by Victorian-era art critic and watercolorist John Ruskin called The Seven Lamps of Architecture. It laid out guiding principles that Van Leuvan found equally germane to the restaurant industry: sacrifice, truth, power, beauty, life, memory, obedience. All that leaves room for a gracious sense of hospitality, right?

Van Leuvan’s employment history reads like a synopsis of Atlanta’s culinary evolution over the last dozen years. He spent time at fine-dining pantheons like Seeger’s and Asher in Roswell. He briefly operated a company that sold pastas to restaurants; became chef and partner at Toast on Fifth Street, serving agnolotti and fun burgers; married Southern and South African cuisines at Saga on Crescent Avenue; and dabbled in Tang-flavored jellies at Spice on Juniper Street. In 2007 he hopped aboard with Concentrics Restaurants, making pasta at Tap and then jumping over to One Midtown Kitchen as executive chef, which he left last year to open Seven Lamps with four partners, including Rob Caswick, Dave Pazienza, and Jeff Newsham, who operate Hearth Pizza Tavern in Sandy Springs.

The menu at Seven Lamps gathers the influences and highlights that span Van Leuvan’s career. The breadth of the cooking and the supper club atmosphere invite diners to construct a meal that matches their mood. I suggest concentrating on liquor and light bites. Start with one of beverage manager Arianne Fielder’s elaborate concoctions; my favorite is the Stiletto, a cocktail anchored by Rusty Blade barrel-aged gin that zigzags through herbal nuances from vermouth, bitters, and Suze, a French aperitif.

Sip as you munch on dishes from the menu’s right side, a collection of oysters, cheeses, charcuterie, and elevated bar-food nibbles called “savouries,” which offer the kitchen’s most noteworthy dishes thus far. Tender lobster chunks tossed in celery aioli arrive in a warm steamed brioche roll with the plush texture of bao, the Chinese steamed buns. Crisp, oval-shaped cottage fries come with a dip based on Duke’s mayonnaise. Fried oysters doused in a hot sauce that burns like lamp oil is a witty riff on the Nashville-style hot chicken currently adored by local chefs. It’s high oyster season, so I hope the kitchen begins to source more exciting varieties than familiar bluepoints and Kumamotos.

The menu’s left side—a roll call of ten small plates, four handmade pastas, and four entrees—wades into iffier territory, both in conception and execution. A few creations prevail. I remember how beautifully Van Leuvan made soups at Toast, and he proves it again with two recent efforts: a warming sweet potato variation spiked with cider and apple brown butter, and also a velvety potato and roasted garlic potage. Jalapeño vinaigrette heats up a salad of grilled baby gem and endive lettuces enlivened with the lovable trio of avocado, blue cheese, and pancetta.

But Van Leuvan’s sweet tooth has taken over his palate: Something honeyed or caramelized or fruity shows up in half of his dishes. Candied orange peel with duck confit, or a complex sherry caramel over a savory tarte Tatin with mushrooms and greens? Fine. But bacon jam in a beet salad or crumbled gingerbread over gnocchi with spinach, pear, and Gorgonzola takes it too far. The sugary jolts distract and eventually become redundant.

Van Leuvan might also leap from architecture to fashion for advice and heed the words of Coco Chanel: “Before you leave the house, look in the mirror and remove one accessory.” A pork chop doesn’t need two substantial starches: Choose the pommes macaire (fried mashed potato cakes) or roasted sunchokes. Skip the overbearing andouille sausage with the tagliatelle and clams. Lose the bacon jam with the beet salad already gussied up with dates, fennel, and Bûcheron cheese. No need to mar affogato—the classic Italian dessert of vanilla gelato with espresso poured over it—by blending ice cream with espresso pastry cream. It makes for an oily mouthful.

Van Leuvan is an old pro; I’m betting that in six months, Seven Lamps will be a finely tuned operation. And it’s heartening to find indie spunk among this stretch of retail stores that otherwise feels forsaken in the evening. But for now, my advice for patrons is to drink up, keep it small and simple, and consider dropping in on a weekday, when the greenhorn staff has the presence of mind to be welcoming. —Bill Addison

Photograph by Iain Bagwell. This review originally appeared in our March 2013 issue.