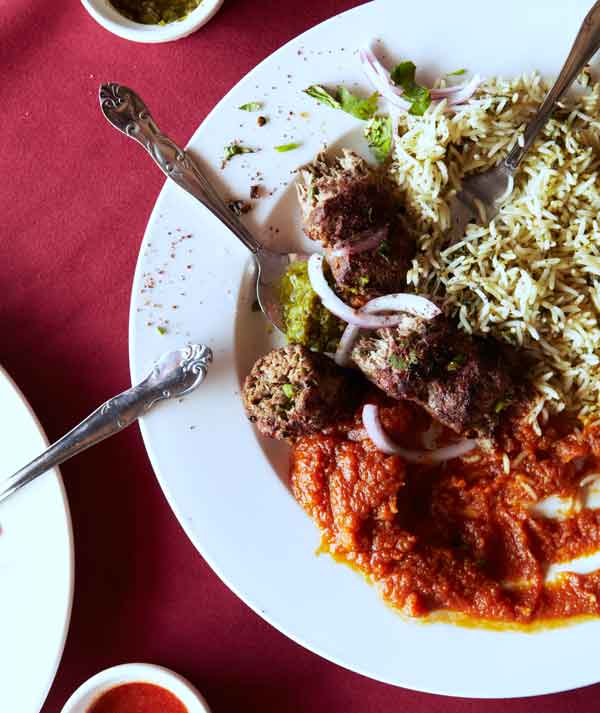 Note: This restaurant is now closed.

Eating aushak, one of the most popular dishes in Afghanistan, is like tasting the results of a culinary genealogy test. These translucent dumplings, filled with leeks and greens, share kinship with wontons and other doughy morsels savored in China, east of Afghanistan. The ginger, garlic, and coriander in the meat sauce that covers the aushak—and the presence of beef altogether—echo the cooking of Pakistan to the south. And a soothing flourish of yogurt, sprinkled with crushed dried mint, harkens directly to western neighbor Iran, whose sophisticated approach to layering flavors rippled through South and Central Asia centuries ago. Major trade routes along the Silk Road crisscrossed through Afghanistan, and the food preserves that history.

Afghan eateries have gained traction on both coasts, but the Atlanta area had gone without one until March, when Shami Kabab opened in Duluth. Owner Kamila Abdul Nabi, who was born in Kabul, fled her country’s political unrest and lived in Russia for a decade. In Moscow she catered parties for other Afghan expats. She moved with her family to Atlanta in 2006 and waited until her children were in school before opening her dream restaurant.

Shami Kabab isn’t a place you visit for the ambience. Burgundy saturates the eyes: It’s the color of the drapes (interspersed with gold), the walls, and the tablecloths. A shiny new flat-panel TV flashes the same banal shots of menu items over and over. Couldn’t someone score bootleg copies of the Afghan soap opera—provocatively named The Secrets of This House—to show instead?

You do come to relish the singular specialties. One of the sincere Afghan servers will quickly steer you toward the aushak. Abdul Nabi couldn’t find the native leafy green traditional to the dish, so she fills her dumplings with a combination of leeks, spinach, and fresh cilantro as a close approximation. You fish them out, coated in the swirl of sauces. The slippery dumplings and tomatoey meat sauce comfort the same way spaghetti and meatballs do, but the additions of gently spiced yellow split peas cooked to melting softness, garlicky yogurt, and dusky dried mint all add exotic frisson.

Aushak’s sibling is mantoo, in which the meat becomes filling for the dumplings. Both of these dishes can be ordered in appetizer or entree portions. Really, if I enticed you to experience only this soul-satisfying duo, my work would be done.

But other signatures among the unevenly executed menu also merit exploration. The restaurant’s namesake, the beef shami kebab, most enthralls among the grilled meats. It’s essentially a sandal­shaped hamburger, Afghan-style. Abdul Nabi guards her spicing secrets (I taste cumin lurking), but she seasons ground beef, smooshes scallions into the mixture before grilling, and removes the meat from the skewer before serving. The seared, caramelized exterior gives way to an interior that stays moist and steamy.

Lamb kebabs, offered as boneless hunks of leg meat or as marinated chops, appeal more than the pale, dry lumps of chicken breast. (If you’re set on fowl, order the variation on the shami kebab made with ground chicken.) Avoid seafood, which mostly comes out overcooked. Two entrees with vague names—”sauteed lamb” and “sauteed chicken”—are simple curries laced with onion and tomato, though the nuances of the spices don’t meld and soften the way they do in the best Indian cooking.

No matter the protein, entrees come with a generous vegetable side and one of three rice pilafs mounded onto the plate. Among the vegetables, home in on the pumpkin, a staple in Afghanistan that comes in two versions: as a coarse puree sugary enough to rival any American sweet potato casserole at Thanksgiving, or sliced, fried, and blanketed with tomato sauce and the now-familiar yogurt sprinkled with dried mint.

Eggplant gets the same tomato-and-yogurt treatment, but the night I had it, the eggplant was undercooked and bitter. The darkened color of the spinach suggests it lived as a block in the freezer for a good while before once again seeing the light of day, and the sauteed mushrooms lack pizzazz in the seasoning department. Stick with either pumpkin preparation; the sweeter one pairs well with the lamb, and the saucy one jazzes up the beef shami kebab winningly.

The pilafs hail from the Persian school of rice cookery, prepared so that every grain remains distinct and fluffy. There’s basmati boiled and then baked with just enough aromatics to lend a sweet scent; another with chopped spinach added to it; and my favorite, qabili pilau, an Afghan classic with a distinct whiff of cardamom that’s strewn with julienned carrots, almonds, and raisins. The kitchen doles out so much, you’ll start dreaming up ways to use leftover rice before you’ve finished the meal. (I had success reheating the plainer pilafs in a steamer and then folding in shrimp sauteed with garlic and a handful of chopped herbs.)

A few other notables: If you want to experiment with appetizers beyond aushak and mantoo, try the bolani, a flaky, appealingly floppy half-moon of flatbread stuffed with either potato or pumpkin. It registers as a cross between Indian aloo paratha and a quesadilla. Dolma—a stuffed pepper filled with ground beef and rice and topped with, yes, more yogurt and mint—conveys the juxtaposition of flavors, familiar yet esoteric, that makes so much of this food a disarming pleasure.

On that note, go for the homemade baklava if you have room for dessert. Baklava from Afghanistan? It appears traders from the Ottoman Empire left their culinary mark as well. What a joy to finally have this restaurant, where we can unravel—and savor—the fascinating, tangled influences of a country most of us know only through headlines conveying dismal political news. —Bill Addison

Photograph by Iain Bagwell. This review originally appeared in our July 2011 issue.

Mochibees opens in Duluth with a wide variety of mochi doughnuts