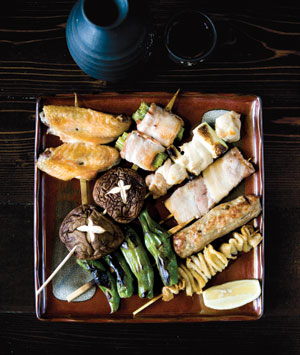 Anyone who’s ever trekked beyond Atlanta’s urban nucleus in search of a secluded dining pearl knows this backdrop well: a desolate commercial stretch scattered with low buildings erected decades ago, a smattering of luxury car dealerships, discount megastores, and, mingled among this alien landscape, the strip malls where the destination restaurants hide.

A friend and I turn into such a mall—a new, multistoried one—west of Spaghetti Junction in Doraville. Super H Mart, a large Asian grocery chain, has plans to anchor the complex, but it remains unopened, and other storefronts stand largely empty. At night, its vast parking lot feels like a college athletic field that sits lit but ignored while school is out for the summer. We park in the one corner where a cluster of cars has amassed and walk into Shoya, a Japanese restaurant that opened in May.

The set change inside is abrupt: austere white walls framed by knotty wood paneling, round lanterns inscribed with Japanese characters, oversize bottles of sake arrayed on a table near the entrance, scurrying servers, the burble of animated conversation. A smiling woman greets us.

“Table for two, please,” I say. Her smile turns apologetic. “I’m sorry, no tables right now,” she responds, gesturing to her left. “The sushi bar, perhaps?” I regard the unoccupied sushi bar, then look around. Families, businessmen, and young hipsters (aone raven-haired Asian woman wears a faded vintage T-shirt that says, “Brunettes have more fun”) huddle in booths and around tables in the front and back of the tiered dining room. I peer upstairs to see if anyone might be vacating a spot on the second floor.

No one wants to be stuck at the sushi bar, a coveted landing-place elsewhere, because raw seafood isn’t the main draw at Shoya. This is an izakaya, which Richard Hosking, who wrote A Dictionary of Japanese Food, describes as a “simple tavern where customers eat and drink at small expense in a cheerful atmosphere.”

That definition suffices, though some izakayas, as with commonplace British pubs morphed into fancier gastropubs, have grown more ambitious in recent years. The ambition travels as izakayas blossom nationally into Japan’s next big culinary import. As its early popularity attests, Shoya captures the izakaya’s essential convivial quality better than any other similar establishment in the Atlanta area, making it absolutely worth the journey.

Then there are the equally important drinks: sake, shochu (a distilled spirit commonly made with barley or sweet potato), beer, wine, whiskey, and soft drinks in strawberry, mango, and green tea flavors. This menu isn’t a greatest hits collection; it’s an all-inclusive box set.

A colleague erudite in Japanese culture and weary of my propensity to over-order begs me to embrace the izakaya ideology: no manic snarfing. Take it slow, he coaches, a few dishes at a time. We start with cups of rich red miso soup and a round of hai-sours—shochu cocktails with soda and varying kinds of citrus (I’m partial to grapefruit), which the servers bring to the table with juicers so we can squeeze the fruit ourselves.

Then we ease into moderate dabbling: Aji namerou, a gently compressed circle of mackerel, is scented with exactly enough ginger, miso, and chive to temper the fish’s aggressive nature. Kushiyaki chicken livers are a quiet revelation: Grilling reveals the livers’ unctuous sweetness. Ninniku shiokara—raw squid, marinated in garlic miso and in fermented soybeans and squid innards—turns out to be as repellent to Western palates as it sounds.

But a menu this grandiose is bound to tax a kitchen, and Shoya produces its share of inconsistencies. Okonomiyaki—a pancake filled with egg, pork shreds, and vegetables covered in a sweet sauce akin to hoisin—comes out fluffy at one dinner and mealy at another. Gyozas might arrive artfully arranged or stuck together and scorched on the bottom. Presentations in general veer from meticulous to downright sloppy, depending on the level of business. And it gets frantic on weekends. That’s when customers become grateful to occupy the sushi bar, and harried servers can disappear for prolonged spells. Several tables come equipped with service call buttons. I’m betting the owners are sorry they installed those things. Folks can get rowdy after a few shochu cocktails.

Izakayas are meant to be boisterous, though; this isn’t a place to eat and drink when you have a time crunch. Nibble a little more on pleasingly austere “seiro steamed” pork with crisp sprouts, or grilled “chicken balls” with a flavor profile nearly identical to the Salisbury steak in Swanson TV dinners. Skip the green tea ice cream served with mashed red beans and instead try the traditional final dish called ochazuke—barley tea poured over rice in a souplike fashion and topped with umeboshi (pickled plum) or flaked pieces of salmon. It speeds digestion, absorbs alcohol, and is just the dish to send you into the night to face the otherworldly stillness of the stadium-size parking lot. —Bill Addison

Photograph by Iain Bagwell. This review originally appeared in our October 2009 issue.